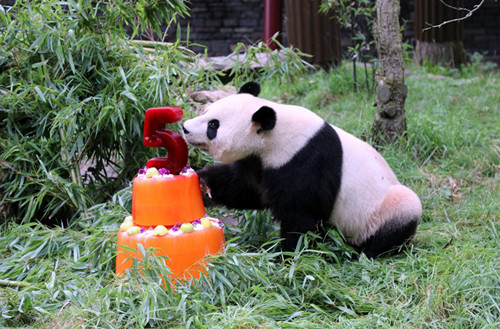 Rhenen (People’s Daily) - On Wednesday, the pandas Xing Ya and Wu Wen celebrated their fifth birthday at Ouwehands Zoo in the central Dutch city of Rhenen. Crowds of people came to witness the exciting moment for the superstar pandas.

At 10:15 am, the birthday party began. The male, Xing Ya, approached the birthday cake prepared by the zoo. It was a multi-tiered, with a big number five on it. Xing Ya ate some apples that bedecked the cake before enjoying the cake itself. Afterwards the female Wu Wen had a bite of a different birthday cake.

In Chinese culture, eight is a lucky number. The Chinese pronunciation of the number eight sounds similar to the word for prosperity and wealth. What’s more, an eight resembles the infinity symbol. Also, when two eights are used next to each other, they resemble the character for “double luck,” according to the zoo. 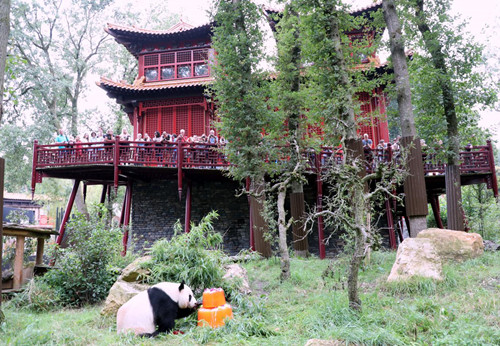 People watch the celebration of the birthday party of the giant pandas.

This festive day was packed full of fun activities, at the center of which was the giant pandas. In China, if it’s your birthday, you treat others, so other bamboo-eating animals, such as elephants and small pandas, were treated to bamboo as well. In addition, children made a wish for Xing Ya and Wu Wen at one of the Chinese wishing trees, participated in the Pandasia scavenger hunt, made panda masks and visited Professor Panda, a park adventurer who knows everything there is to know about giant pandas, China and Pandasia.

In the spring, the giant pandas had their first face-to-face meeting. They were given the opportunity to see, hear and smell each other from close up. While Xing Ya and Wu Wen were visibly and audibly interested in one another, both animals were still too young and their meeting did not result in them mating. A female panda is only fertile for 3 to 7 days per year, which makes reproduction among giant pandas complicated.