A purple glow illuminates stacked boxes where lettuce, herbs and kale will soon be sprouting at one of Europe's biggest "vertical farms" which has just opened in a warehouse in an industrial zone in Copenhagen. 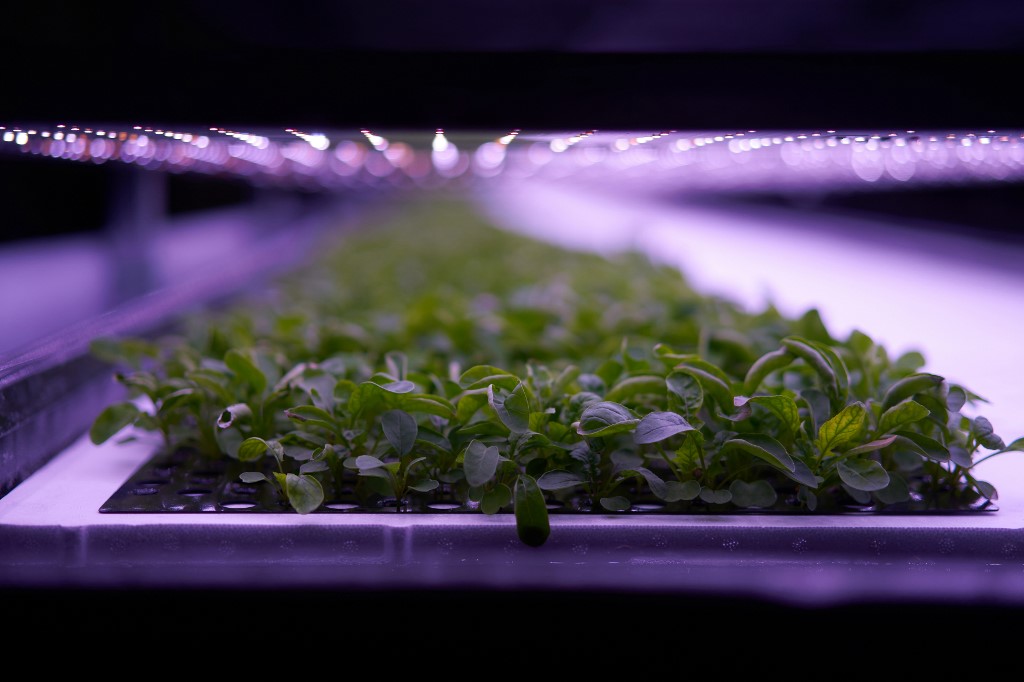 A photo taken on November 20, 2020 shows plants cultivated at the vertical plant farm 'Nordic Harvest' based in Taastrup, a suburb west of Copenhagen. (Photo: AFP)

The produce grown here will be harvested 15 times a year, despite never seeing soil or daylight. It is lit up around the clock by 20,000 specialised LED lightbulbs.

In this futuristic farm, little robots deliver trays of seeds from aisle to aisle. 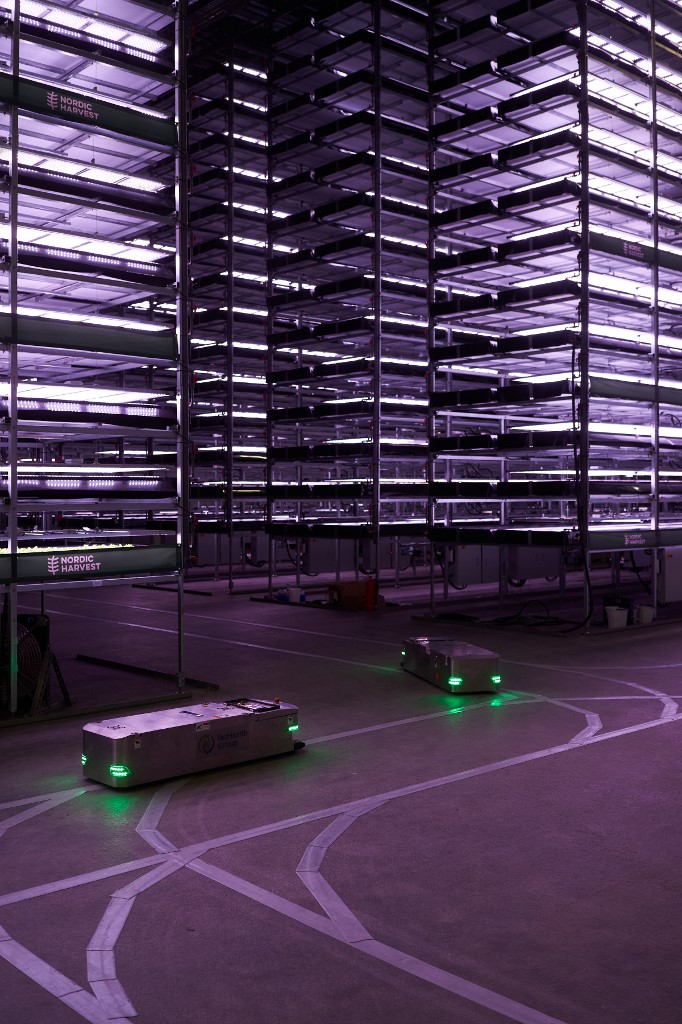 Robots, used to plant seeds and check the plants while growing, move past vertical racks at vertical plant farm 'Nordic Harvest' based in Taastrup, a suburb west of Copenhagen, on November 20, 2020. (Photo: AFP)

The large aluminium boxes are mostly empty for now, but lettuce and other leafy greens will soon be growing.

Some 200 tonnes of produce are due to be harvested in the first quarter of 2021, and almost 1,000 tonnes annually when the farm is running at full capacity by the end of 2021, explains Anders Riemann, founder and chief executive of Nordic Harvest.

That would make the Taastrup warehouse one of Europe's biggest vertical farms.

These urban facilities have unsurprisingly received a cool welcome from rural farmers, who have questioned their ability to feed the planet and criticised their electricity consumption.

But Riemann stresses the environmental benefits of his farm, with produce grown close to consumers and its use of green electricity.

"A vertical farm is characterised by not harming the environment by recycling all the water and nutrition or fertiliser," says Riemann, who uses no pesticides.

In Denmark, a world leader in wind farms, about 40 percent of electricity consumption is wind-based.

"In our case, we use 100 percent energy from windmills which makes us CO2-neutral," he adds.

While he wouldn't disclose how much Nordic Harvest's electricity bill comes to, he said the power came with "wind certificates" registered on the Danish commodities exchange.

These legal documents guarantee that "the amount of electricity you consume in one year is equivalent to the electricity produced by numbered windmills offshore".

First developed around a decade ago, vertical farms have taken off in Asia and the United States, which is home to the world's biggest.

The idea has slowly started to catch on in Europe.

Urban farming could even allow land exploited by single-culture farming to be reforested, Riemann said.

"We moved the forests in order to have fields," he laments, noting that now farmers like him can bring "some of the food production back into the cities where you can grow on much smaller land and space optimised in height".

The names of his clients remain confidential, but they include caterers, restaurants and even supermarkets.

According to a poll conducted by the Danish Farmers Union, 95 percent of Danes are ready to change their consumer behaviour to protect the environment.

Nordic Harvest's products are however not labelled as organic.

"The EU regulation dictates that the word organic is linked to the word 'soil' so if you take soil out of the equation you can't name it organic anymore," he says.

But "we grow on the same terms as organic: we don't use pesticides or insecticides".

"It works in Japan or Shanghai, where there's no space to farm and where they want quality products," he says.

But despite what polls suggest, Ottosen insists Danes are still more inclined to buy products based on "price, not taste".