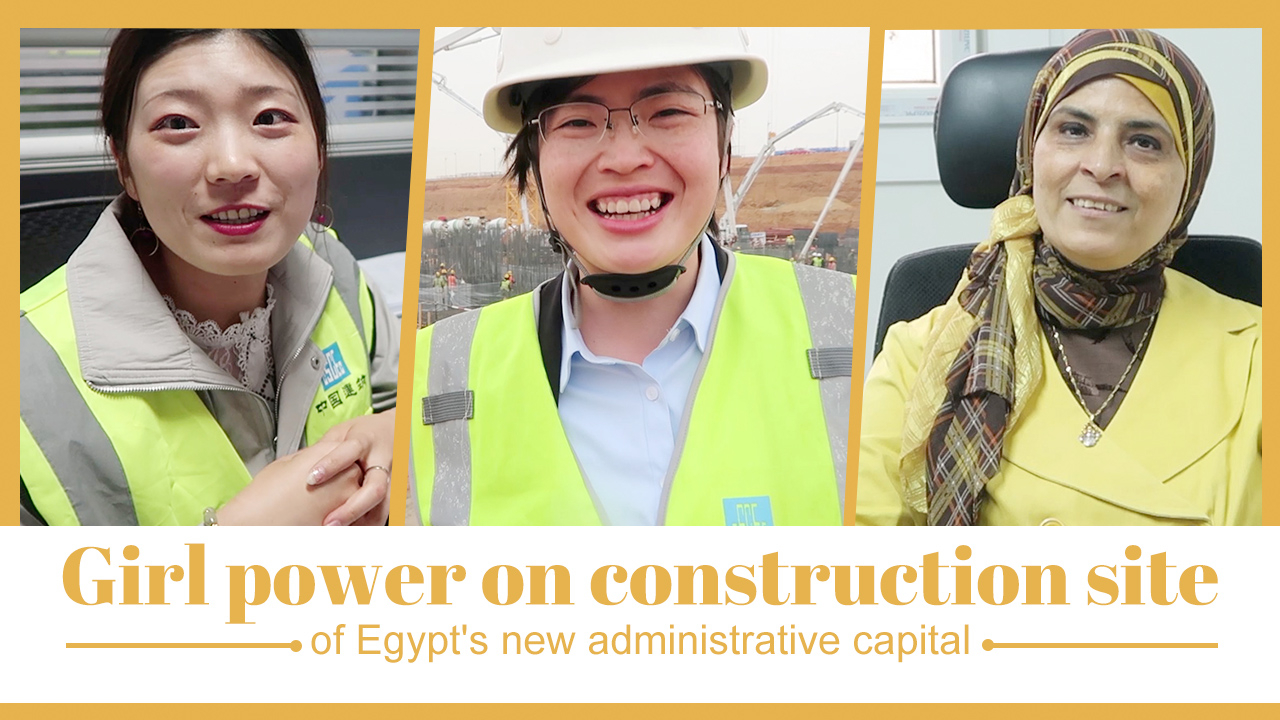 On a rainy day, some 50 kilometers east of Cairo, we witnessed how Egypt's new administrative capital is slowly rumbling to life.

Egyptian and Chinese construction workers are working side by side to transform a patch of desert into a vibrant Central Business District (CBD).

They are erecting a concrete jungle of 20 skyscrapers in the first phase of the CBD project, among which will be the tallest building in Africa, towering at 385 meters upon completion.

Phase one of the CBD project has a total construction area of about 1.7 million square meters and a contract period of 43 months, with a contract value of three billion US dollars.

The noisy sound of cranes, the concreting operations, and the huge steel bars being hoisted up add a sci-fi feel to the busy construction site. Undoubtedly, it's a male-dominated world, but what do women workers feel about this tough environment? CGTN spoke to three women at the construction site.

Wang Yao, 33, is a project manager at the CBD project. She is in charge of the construction site of the P3 area, which covers an area of 170,000 square meters and employs 400 workers.

Coming from a small town in southwest China's Sichuan Province, she apologized to us in advance for not being able to converse fluently in Mandarin with us.

She said most of the workers are Egyptians. Complying with local policies, the project has a 90-percent management system, which means that for every Chinese worker who enters Egypt, they have to provide working opportunities to 10 domestic workers. The workers' daily pay, together with the occasional overtime bonus, is around 300 Egyptian pounds (about 17 US dollars). It's a very high salary in Egypt, she said.

Thirty percent of her daily routine is on construction sites. She spends the remaining 70 percent in the office, contacting architects, purchasing materials, and managing contracts.

But how does she feel about being one of the very few women on site, working in an industry that traditionally had been the turf of men?

It's all about the mindset, Wang said.

"Regardless of whether they are Chinese or local men, if you are good at your job, they will respect you," Wang stated.

She found her way into the industry because of her long lineage in the construction sector. After four years in college, and years' worth of hard work, she grew to love the industry.

Her husband is also her colleague, but he works at the P4 area. The two also studied at the same university, even though she was a year older than him. They've known each other for 10 years now.

Upon her graduation, she landed a job in Algeria, so he came along. And when she moved to Egypt, he accompanied her here.

The couple has a daughter. She's one year and seven months, and is being taken care of by Wang's parents.

When things get hectic at work, she forgets that she has a child, Wang joked. But humor seems to be a coping mechanism. She mentioned that whenever they're on the phone, if her child expresses her longing to her, Wang would start crying.

Hanan Osman has spent the past 30 years working for CSCEC. She found the job through a friend after graduating in 1987, and thought she would not last a year. Thirty years on, she's still an indispensable part of the Chinese company.

It's her second family, she stated.

Her job responsibility is to process work permits and visas for the 2,000 Chinese workers working on this project.

Her work frequently takes her to the local work permit office and the Ministry of Labor. She said the Egyptian government has been active in solving all the problems for them. For example, Chinese workers' visas are usually issued for six months or a full year. To renew a work visa, a foreign resident normally has to leave the country, but the Egyptian government has made an exception for this project. Now, Chinese workers can renew their visas without flying out of Egypt.

Hanan said she likes Chinese culture, and enjoys traditional celebrations, such as the Spring Festival.

Wang Junxia, or "Little Flower," is a purchasing manager working on the P5 area of the CBD project. She's mainly responsible for recruitment, material purchasing, and subcontract management. The 26-year-old joined the project in May 2018.

Before Egypt, Wang was working in Rwanda for about three years, where she held a similar position. She said she had read a lot about the "country of a thousand hills," and wanted to give it a try.

"(Construction sites) give you a different life experience. You don't have to always sit in the office. You will have the chance to meet more people, have more opportunities to learn how to handle people-to-people connections and workplace connections."

Wang said her subcontractor always says that the project is stimulating Egypt's economy. "(Previous projects) would never pay or perform as fast and good as China State Construction. They also would not offer business conditions as good as the CSCEC offered. The local subcontractors would even help to promote local work progress for the project," she added.

She said big materials such as the project's molding system, concrete, and reinforcing bars were all purchased from local companies, amounting up to 60 million Egyptian pounds (3.5 million US dollars) just for the P5 area.

Like Wang Yao, she said she doesn't feel unsafe to work in a male-dominated industry and construction site. She said it might have to do with her outgoing personality.

Because of the nature of her work, she is constantly visiting construction sites. There, workers would greet her, and they've become friends after working together for a long time. Sometimes they would jokingly say, "Little flower, you are here to examine us again! Or here comes manager flower again." This makes her feels closer to them.

Speaking of her nickname, she said when she first arrived in Egypt, she joked about making her nickname "Desert Flower" official. Later, because of her tough work style, she gathered a few names, such as "Desert Cactus," "Manager Flower" and "Director Flower."

The second phase of the CBD project has a contract value of 3.5 billion US dollars. The project consists of more than 20 high-rises with a total construction area of approximately 1.8 million square meters, including offices, hotels, high-end apartments, shopping malls, sports venues, recreational facilities and a river-like landscape green belt.

Upon completion, phase one and phase two will become the heart of the new administrative capital of Egypt. The successful implementation of the project will not only ease the population and traffic pressure in Cairo, but also push forward the development of the Egyptian Suez Canal Economic Belt and the Red Sea Economic Belt, thus contributing to the realization of the Egyptian National Rehabilitation Plan.

The project is a landmark for the China-proposed Belt and Road Initiative (BRI) .This CBD project is also the largest project that Chinese-funded enterprises have undertaken in the Egyptian market so far.