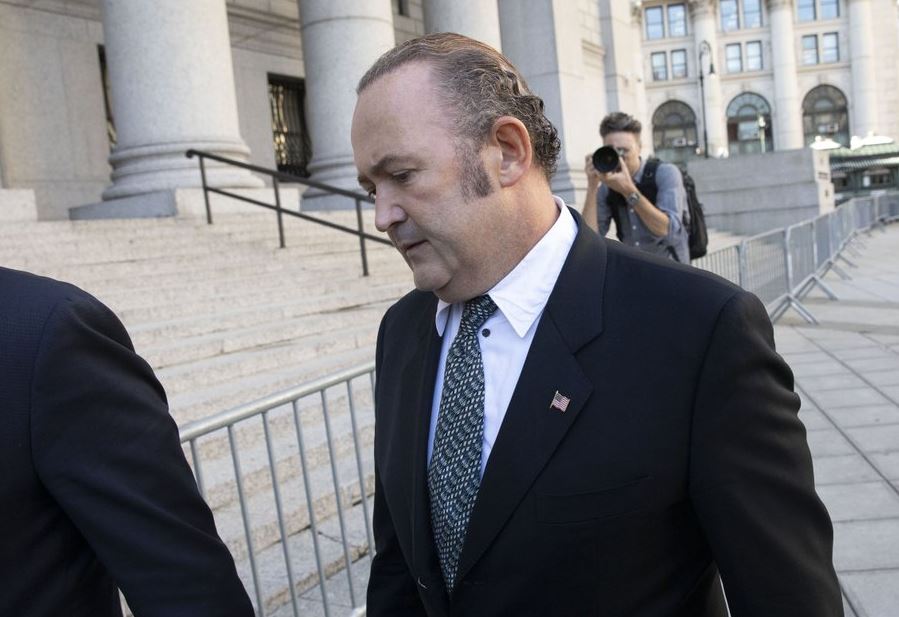 In a back corner of the swank H Bar in Houston, near a huge photo of Brigitte Bardot with a dangling cigarette and a deck of cards, two Russian-speaking men offered a Ukrainian gas executive what seemed like an outrageous business proposal.

Andrew Favorov, the No. 2 at Ukraine’s state-run gas company Naftogaz, says he sat on a red leather bench seat and listened wide-eyed as the men boasted of their connections to President Donald Trump and proposed a deal to sell large quantities of liquefied natural gas from Texas to Ukraine.

But first, Favorov says, they told him they would have to remove two obstacles: Favorov’s boss and the US ambassador in Kyiv, the Ukrainian capital.Favorov says he hardly took the proposal at the early March meeting seriously.

The men, who sported open shirts showing off thick gold chains at a conference where most wore business attire, had zero experience in the gas business. And it wasn’t plausible to Favorov that they would be able to oust his boss, never mind remove a US ambassador.

What he didn’t know as he sipped whiskey that evening was that high-ranking officials in the Ukrainian government were already taking steps to topple his boss, Naftogaz CEO Andriy Kobolyev. And two months later, Trump recalled US Ambassador Marie Yovanovitch, a career diplomat with a reputation as an anti-corruption crusader.

The gas deal sought by Lev Parnas and Igor Fruman never came to pass. But their efforts to profit from contacts with GOP luminaries are now part of a broad federal criminal investigation into the two men and their close associate, Rudy Giuliani, Trump’s personal attorney.

The Associated Press reported some details in October of the brash pitch that Parnas and Fruman made to Favorov in Houston. But in a recent series of interviews with the AP in Kyiv, Favorov painted a more complete picture of his dealings with Giuliani’s associates.

His tale, corroborated by interviews with other key witnesses, reveals that the pair continued to pursue a deal for months. The campaign culminated in May, at a meeting at the Trump International Hotel in Washington that included a lobbyist with deep ties to US Energy Secretary Rick Perry and a Republican fundraiser from Texas close to Donald Trump Jr.

Three people with direct knowledge of that meeting described it to the AP on condition of anonymity because some of the players are under federal investigation.The maneuvering over Naftogaz came at the same time that Giuliani, with the help of Parnas and Fruman, were trying to get Yovanovitch out of the way and persuade Ukraine’s leaders to announce an investigation into former Vice President Joe Biden and his son Hunter’s work with Burisma, a rival Ukrainian gas company.

To achieve those ends, they sought to eliminate the safeguards put in place over the last decade at the urging of American and European diplomats to help insulate Naftogaz from the corruption rife in Ukraine.The story illustrates an essential backdrop of both the impeachment drama roiling US politics and the criminal investigation of Giuliani and his associates: the decades-long tug of war between Russia and the West over Ukraine, in which geopolitical influence, natural resources and corruption are major themes.

Yovanovitch is now a key witness in the impeachment inquiry, and federal prosecutors investigating Giuliani have interviewed both Favorov and Kobolyev.

Parnas and Fruman were arrested Oct. 9 at an airport outside Washington carrying one-way tickets to Europe and are charged with conspiracy, making false statements and falsification of records in a case centered on alleged campaign finance violations. Fruman’s lawyer did not respond to requests for comment and Parnas’ lawyer did not immediately answer written questions posed by AP.

It was about seven years ago that Favorov says he first crossed paths with Fruman, who owned the luxurious Otrada Hotel in Odessa, a Ukrainian city famous for its opulent Black Sea resorts. Favorov, who ran a gas trading company, was there for a retreat and became friendly with the hotel owner, and the two men have kept in sporadic touch ever since.

After Naftogaz announced early this year that Favorov had been appointed its No. 2, he says Fruman, who had emigrated to the United States years earlier, called to chat about the US natural gas business and tout his connections to the Trump administration.

Favorov, a dual US-Russian citizen based in Kyiv, had heard that his acquaintance was involved in Republican politics in Florida. Favorov recalls suggesting they meet up at an energy industry conference he was attending in Houston.“Good,” he says Fruman told him. “I want to introduce you to someone.”

Favorov flew to Houston in March to attend the CERAWeek conference, the most important annual gathering for the US energy industry, ready to pitch Ukraine as a destination for the glut of cheap US liquefied natural gas unleashed by the fracking boom.

He was particularly eager for a dinner meeting Fruman had arranged with Harry Sargeant III, a billionaire who had made his fortune in oil and shipping, including transporting jet fuel for the US military in Iraq.

For decades, natural gas has been the essential commodity in Ukraine’s struggle for independence from its former Soviet-era masters in Moscow. Russia controls one of the world’s largest supplies of natural gas, which Ukraine and much of Europe rely upon.

With Western help, Ukraine has been working to wean itself from dependence on Russia, something that became more important in 2014, when Russian troops invaded and annexed the Ukrainian peninsula of Crimea.

For the last five years, war has raged between the Ukrainian government and Russian-backed separatists in the country’s eastern region.

As part of the efforts to improve Kyiv’s leverage with Moscow, Naftogaz built enormous capacity to store natural gas, just as the gas boom in the United States has left Texas producers with so little storage capacity that they’re burning off their excess.

In response, the industry has been frantically expanding its infrastructure along the Gulf Coast to compress natural gas into its super-chilled, liquefied form for export overseas in specially built supertankers.

Perry, in a keynote address at the CERAWeek 2019 conference, predicted that US capacity to export natural gas would expand 150% this year.

The energy secretary had traveled to Kyiv a few months earlier and met with key Ukrainian officials and business leaders, including Favorov.So as Favorov sat with Parnas, Fruman and Sargeant at the Houston restaurant Vic and Anthony’s talking about the potential money to be made exporting liquefied natural gas from the US to Ukraine, he says he presumed Sargeant was brought in because he could move the product.

Ukraine had an annual deficit of gas supplies equivalent to about 100 shiploads and, as Ukraine’s state-owned gas distributor, Naftogaz would be the country’s biggest potential buyer.Favorov says he came away from the meeting with the impression that Sargeant was evaluating opportunities, but he says Sargeant did not propose any specific business deals at the meeting.

Chris Kise, Sargeant’s lawyer, said in an email to AP that the billionaire had no specific business in mind when he attended the dinner and doesn’t currently own ships that can move liquefied natural gas.“At the dinner, Mr. Sargeant simply provided broad industry guidance and his expert view on the challenges presented by operating in foreign markets,” Kise said.

“Mr. Sargeant has no business with Mr. Parnas or Fruman, and no business in Ukraine.”It didn’t take long, Favorov says, for Parnas and Fruman to follow up.