Glimmer of hope seen in crisis 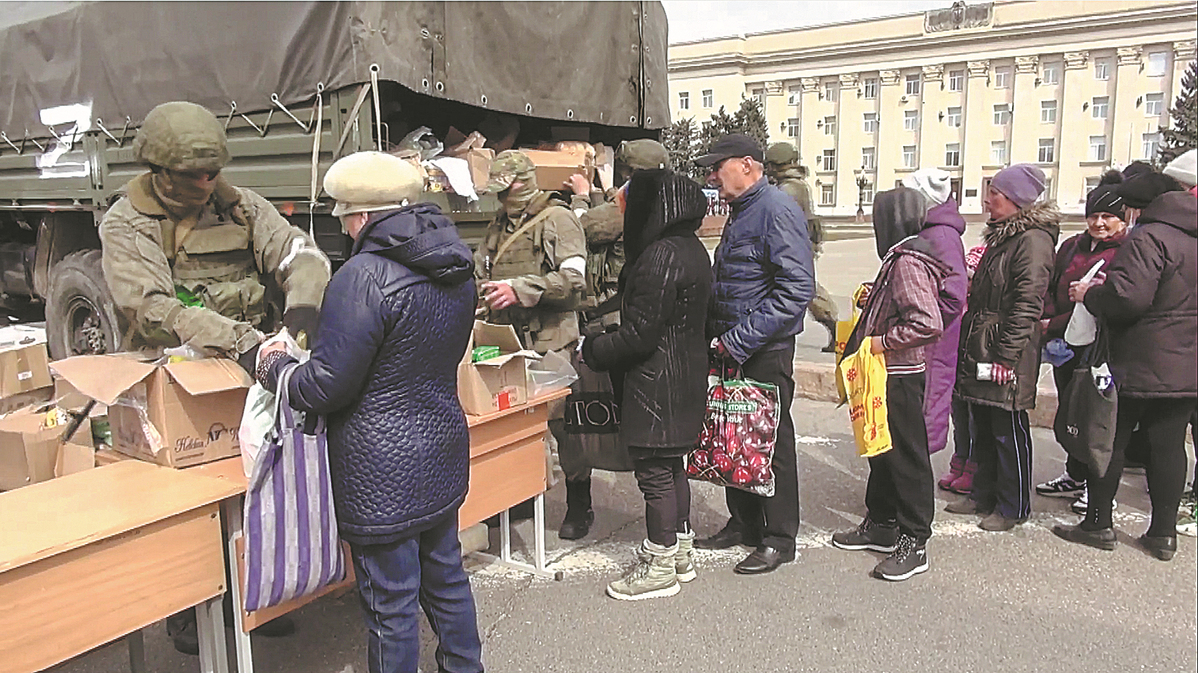 Russian soldiers distribute aid to residents of the Ukrainian city of Kherson, in this image from a video released on Thursday. (Photo: China Daily)

Flexibility evident with proposal for Ukraine, Russia leaders to meet

This week, delegations from Russia and Ukraine came face to face for the first time in two weeks. They did so over a white tablecloth at a long table inside a 19th century Ottoman palace on the banks of the Bosporus in Istanbul, welcomed by Turkish President Recep Tayyip Erdogan with a greeting in English－"Good morning".

After more than a month of talks, first in person in Belarus, then in recent weeks via video, the diplomacy between Ukraine and Russia has been running in parallel to their conflict, which entered a new phase on Tuesday.

Russian Deputy Defense Minister Alexander Fomin on Tuesday announced that Russia would decrease the military activities in the areas around Kyiv and Chernihiv in an effort to "increase mutual trust for future negotiations" to lead to a peace deal with Ukraine.

However, Russian President Vladimir Putin told Italian Prime Minister Mario Draghi that conditions were not yet in place for a cease-fire in Ukraine, Draghi told a news conference on Thursday when asked about a telephone call with Putin the previous day.

David Arakhamia, the head of the nine-person Ukrainian delegation, said that holding the talks in Turkey was a "victory" in itself, because Turkey "is our friend and partner". The earlier in-person rounds of talks had been held in Belarus, Russia's closest ally.

But Turkey, while a NATO member, has also been determined to maintain ties with Russia, refusing to join sanctions against Moscow and maintaining direct air connections to multiple Russian cities.

Right after the Istanbul meeting, Moscow proposed a meeting between the Russian and Ukrainian presidents for the first time during the conflict.

Russian presidential aide Vladimir Medinsky said after the talks that Russia suggested a meeting between Putin and his Ukrainian counterpart Volodymyr Zelensky "be organized concurrently with the initialing of a bilateral treaty" by the foreign ministers of both countries.

It was the first time that a senior Russian official proposed a meeting between the two presidents. Kremlin spokesman Dmitry Peskov noted the importance of continuing the face-to-face dialogue.

Although Peskov said there had been no "significant achievements "from the talks so far, some experts are encouraged by an apparent more flexible position signaled by Ukraine.

Dmitry Suslov, the deputy director of the Center for Comprehensive European and International Studies at the Higher School of Economics, cited statements last week from Zelensky about his readiness to discuss the status of Crimea and the Donbass region at a meeting with Putin. This possible shift in his position could be due to his wish to secure a top-level summit, he said.

The Istanbul talks were scheduled to last two days, but after Tuesday's meeting, sources in the Russian delegation and the Turkish Foreign Ministry said the round was over.

Russia's special military operation will continue at least in the Donbass, because the talks haven't made headway on Russia's two key goals: the demilitarization and denazification of Ukraine, Suslov said.

He predicts Ukraine's armed forces there will either be pushed back or encircled. He envisions two possible scenarios: Russia will either try to resolve all the issues comprehensively in one agreement, which means that the special operation will continue, including in southern Ukraine, or it will agree to Ukraine's proposals relating to a neutral and non-nuclear status. Under this scenario, the resolution of the territorial issues will be postponed.

Russian International Affairs Council Director-General Andrey Kortunov expressed his optimism after the latest round of talks, saying the results showed that the rhetoric of both sides has been toned down.

"That said, it is obvious that so far there is no clear rapprochement on the territorial issue," he added.

Georgia's breakaway region of South Ossetia is seeking to take legal steps to join the Russian Federation in the near future, the leader of the region said on Wednesday.