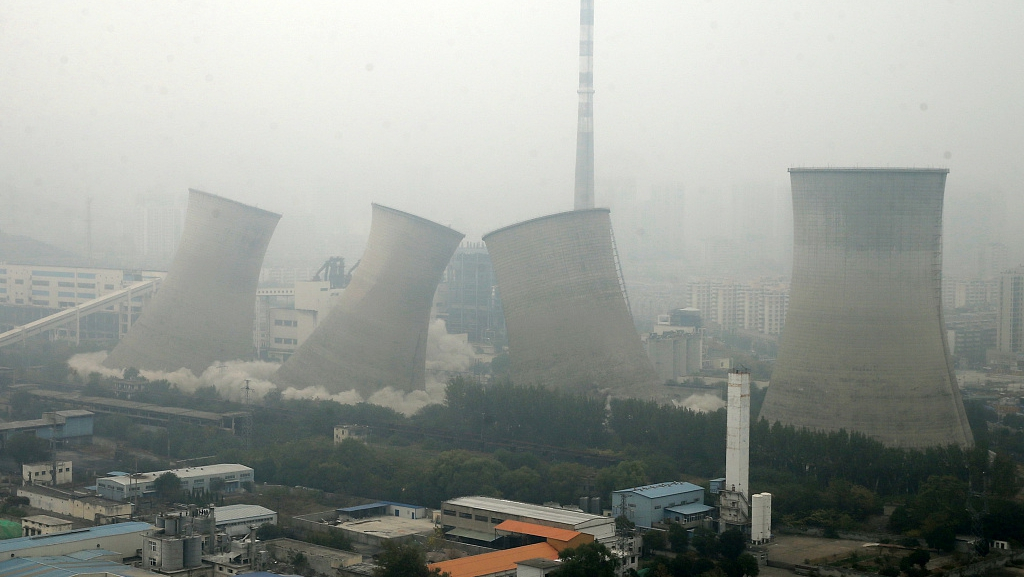 The cooling tower and boiler room of Datang Huaibei Power Plant in Anhui Province were demolished as a part of China's switch over to clean energy, October 25, 2018. (Photo: VCG)

The global average carbon dioxide (CO2) concentration in the atmosphere was highest on record in the last 60 years, the National Oceanic and Atmospheric Administration (NOAA) announced on Tuesday.

The heat-trapping nature of CO2, a greenhouse gas, contributes significantly to the global temperature rise. The concentration level of the gas was measured at 414.8 parts per million (PPM) for May, the highest monthly level on record.

Such a steady surge of the gas would lead to frequent extreme weather events and fail the global efforts to contain temperature rise by 2 degrees Celsius, scientists warned.

“It's critically important to have these accurate, long-term measurements of CO2 in order to understand how quickly fossil fuel pollution is changing our climate,” Pieter Tans, a senior scientist with NOAA's Global Monitoring Division, said.

“These are measurements of the real atmosphere. They do not depend on any models, but they help us verify climate model projections, which if anything, have underestimated the rapid pace of climate change being observed.”

The monthly CO2 level crossed the 400 ppm threshold in 2014. With the CO2 level skyrocketing for the seventh consecutive year, scientists called for more action to reduce global emissions.

The concentration level of the gas has been increasing every year, but in the previous few decades, the rate of increase has nearly tripled.

Since NOAA started measuring the CO2 level in 1958, the annual increase averaged at around .7 ppm annually. The rate spiraled to 1.6 ppm in the 1980s and witnessed a marginal decline in the 1990s to 1.5 ppm. However, in the last decade, the CO2 level soared dramatically to 2.2 ppm.

“There is abundant and conclusive evidence that the acceleration is caused by increased emissions,” Tans said.