The live feed of the construction of the two hospitals in Wuhan, Huoshenshan and Leishenshan, have attracted more than 50 million netizens, making "China speed" and "China power" the continuous focus on social platforms all around the world. 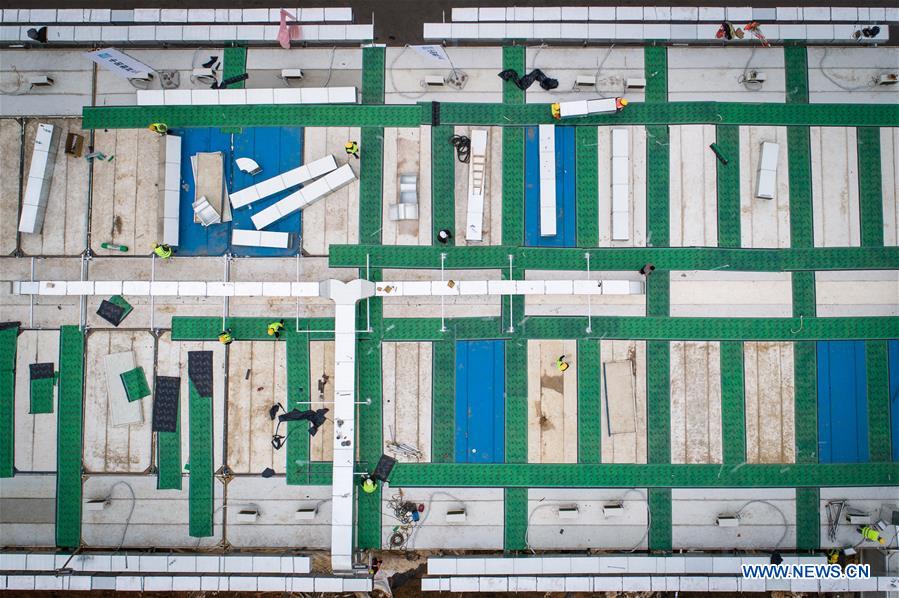 Aerial photo taken on Feb. 1, 2020 shows the construction site of Huoshenshan (Fire God Mountain) Hospital in Wuhan, central China's Hubei Province. According to the plan, the construction of the hospital will be completed on Feb. 2. (Photo: Xinhua)

Huoshenshan and Leishenshan hospitals were officially put into use on February 4 and February 6 respectively, in order to take in more patients infected with the novel coronavirus. Workers worked in construction sites around the clock, which was covered live and put on social platforms.

One netizen commented: "I can't believe it! That would take five years in the US.”

“A 33-hectare hospital was built in 10 days, like Aladdin polishing a magic lamp,” another netizen said.

Since the outbreak, tens of thousands of medical staff have been sent to Hubei Province to provide services. Administrative law enforcement departments took strict precautionary measures to prevent the spread of the epidemic, people were checked from door to door and required to stay at home and live in quarantine.

Taking a highly responsible attitude toward people's lives and health, the Chinese government has taken unprecedented prevention, control and treatment measures, and vowed to resolutely win the battle against the outbreak.

"China's organizational power" has become a buzz phrase on the internet at home and abroad. Netizens around the world have been highly appraising the Chinese government for its efforts on major issues, putting people's health and safety first, and making the whole nation work together to prevent and control COVID-19.

The affirmation of two hospitals construction speed is only the epitome of netizens praising China's action to fight the epidemic. On short-video platform Douyin, a video of thumbing up China by a foreigner living in China has also gone viral.

“How shocked everyone is about how China is dealing with this sudden outbreak of epidemic that shutting down an entire city, and I don’t think there is another country on the planet that has the power to do this,” the video said.

Netizens approved China’s determination, speed and measures to combat the outbreak, as well as the government’s philosophy of putting people's health and safety first. In recent days, an article comparing the prevention and control of virus outbreaks in China and the US has been widely viewed on the Internet.

Mario Cavolo, an Italian-American who has lived in China for nearly 20 years, compared the 2009 H1N1 virus in the US with the current novel coronavirus. He expressed admiration for the positive actions taken by China and refuted the malicious remarks against China.

The article pointed out that when the H1N1 swine flu emerged, it took six months for the US to declare a national emergency, which eventually infected 60 million people in the US and killed a minimum of 18,000 worldwide that year. And the final story of the H1N1 global pandemic was far worse than that, with close to 300,000 deaths, according to the final tallies in 2012.

Hamza Beldjillali, a native French, is engaged in the beverage sector and now lives in Foshan, south China’s Guangdong Province. As a father of two, he thought about leaving China at first when COVID-19 broke out. However, after experiencing a series of preventive and control measures, his panic and doubts were gradually eliminated.

“On the way back to Foshan from Guangzhou, body temperatures were checked five times. Strict prevention benefits both individuals and the society,” Beldjillali said.

A journalist from Romania in China published an article titled A Romanian’s personal experience in China amid the epidemic, which said that customs with the history of thousands of years in China can be suspended in order to prevent and control the epidemic. There are no more visits and traveling, while adults and children stay indoors all day. People isolate themselves and share food and memes on WeChat, telling the world with smiles that the Chinese will never be stuck in pessimism or panic.

Many netizens said that the COVID-19 outbreak has given people a sense of charisma and executive power of a responsible great country. At the same time, it shows that Chinese people respond to the call of the party and the government, follow the epidemic prevention and control arrangements, and build a tight line of defense of mass prevention-control among the 1.4 billion people.

“Whenever China faces threats, its determination to overcome difficulties can overcome almost all obstacles,” according to international public opinion.