Stocks turned lower in Europe on Tuesday after a mixed session in Asia as investors turned cautious over prospects for reining in a resurgence in coronavirus outbreaks. 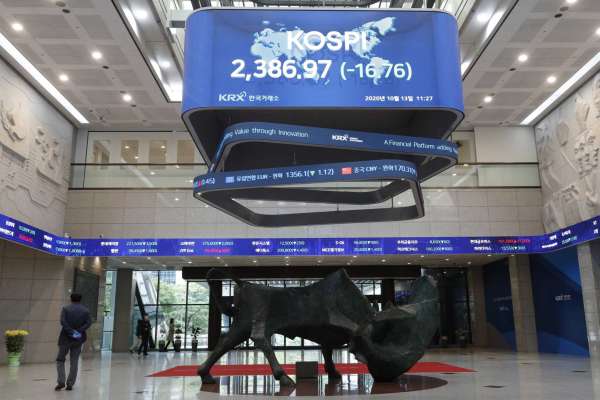 Shares fell in Paris and London, but edged higher in Tokyo and Shanghai after China reported its exports jumped nearly 10% in dollar terms in September as its economy recovered from the pandemic. U.S. futures were lower.

Hopes for a vaccine for the coronavirus were shaken after Johnson & Johnson said a late-stage study of its vaccine candidate was paused while the company investigates whether a study participant’s “unexplained illness” was related to the shot.

The head of the World Health Organization, Tedros Adhanom Ghebreyesus, told reporters at a briefing Monday that countries have reported record-high daily increases in COVID-19 cases for the previous four days, especially in Europe and the Americas.

The number of confirmed cases of the virus has climbed to more than 37.8 million worldwide, according to a tally by the Johns Hopkins University. More than 1 million have died, according to that tally, which experts say understates the actual number of cases.

Optimism over hopes for new aid for the U.S. economy has faded with signs a stalemate over more stimulus might persist until after the Nov. 3 presidential election. Investors also are sticking to the sidelines, analysts said, ahead of the release of third-quarter corporate earnings for the U.S., beginning Tuesday.

Sentiment in Asia got a modest boost from China's report that its exports rose 9.9% from a year earlier to $239.8 billion in September, while imports gained 13.2% to $202.8 billion.

The customs data showed exports to the United States rose 20.5% to $44 billion despite higher U.S. tariffs, while imports of American goods rose 24.5% to $13.2 billion.

Chinese exporters have benefited from China’s relatively early reopening from pandemic shutdowns and from strong global demand for masks and medical supplies.

“Exports continued to do well, most likely thanks to the recent strength of retail sales among China’s major trading partners. And a jump in imports suggests that domestic investment spending remains robust," Julian Evans-Pritchard of Capital Economics said in a report.

Australia's S&P/ASX 200 climbed 1% to 6,195.70, led by gains in banks' shares. Strong Chinese demand is good news for Australian exporters, though unconfirmed reports that Beijing is slowing or halting imports of Australian coal have raised concerns over the economic impact of political friction between the two countries.

Analysts are forecasting the upcoming earnings reporting season will show another quarter of weaker profits. S&P 500 earnings are expected to be down 20.5% from a year earlier, according to FactSet, better than the 31.6% drop in the spring quarter.

In energy dealings, U.S. benchmark crude gained 16 cents to $39.59 per barrel in electronic trading on the New York Mercantile Exchange. It lost $1.17 to $39.43 per barrel on Monday.