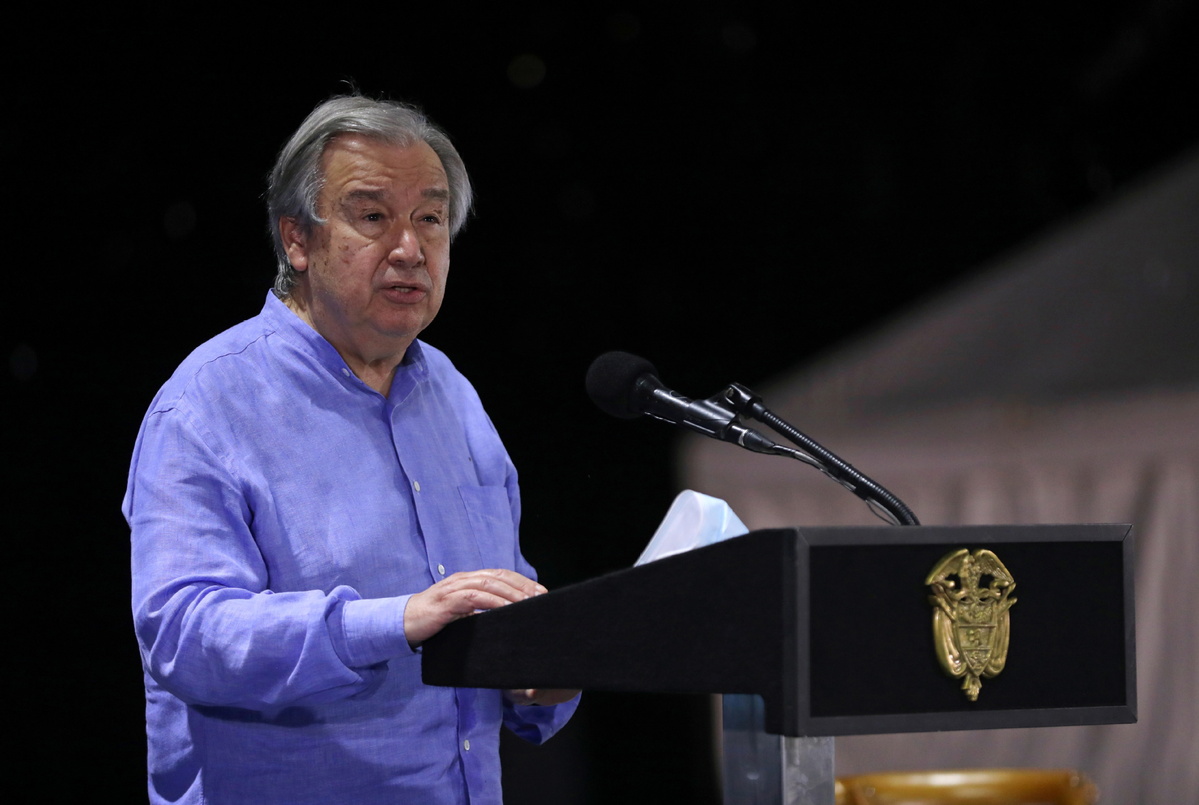 UNITED NATIONS - United Nations Secretary-General Antonio Guterres argued on Tuesday that "the only way out of a global pandemic and out of this unjust and immoral situation is through a global vaccination campaign."

The secretary-general was speaking at a meeting at the UN headquarters in New York of Foreign Ministers of the Group of 77 (G77) and China, where he noted that the COVID-19 pandemic "continues to wreak havoc" on developed and developing countries alike.

He said that the UN stands behind the vaccination strategy set out by the World Health Organization, with the goal of getting vaccines into the arms of 40 percent of people in all countries by the end of this year, and 70 percent by the middle of 2022.

"Everyone, everywhere, must have access to COVID-19 vaccines, tests and treatment," the top UN official said, asking for support for the ACT-accelerator and the COVAX facility.

The world economy is expected to grow by 5.9 percent this year, but the pace of recovery is extremely uneven, Guterres said.

When developed economies invest 28 percent of their GDP in recovery, middle income countries invest 6 percent, and least developed nations invest just 1.8 percent, this does not seem surprising to him.

In Sub-Saharan Africa, for example, the International Monetary Fund (IMF) projects that cumulative economic growth per capita over the next five years will be 75 percent less than the rest of the world.

"This dangerous divergence threatens to widen as growth rates are expected to decrease in 2022. Rising inflation could also have a negative impact on the cost of borrowing and servicing debt," he warned.

Climate change, inequality, and the development of new technologies were also addressed by the UN chief, who called for "a quantum leap in unity and solidarity" to address these global problems.

During the pandemic, the secretary-general highlighted the importance of multilateralism and the role of the United Nations.

For the secretary-general, it was recent reforms that enabled the world body to adjust and respond quickly.

"As a result, more than 90 percent of host governments have indicated that the United Nations today is more relevant to their country's development needs when compared to three years ago," he said.

On the 2030 Agenda and the Paris Agreement, the UN chief said that "we must intensify our efforts in this Decade of Action to deliver the Sustainable Development Goals. This is vital to achieving a fair globalization, boosting economic growth and preventing conflict."

Noting that the outcome of COP26 in Glasgow was the bare minimum required to keep the 1.5-degree promise of Paris alive, Guterres said that he counts on the leadership of the G77 and China over the coming year "to increase ambition and push for that ambition not only on mitigation, but on adaptation -- a basic need for so many countries -- on finance, and on loss and damage, where we still have such a long way to go."

"We need a quantum leap in unity and solidarity to make collective decisions on the global challenges we face, from the climate crisis to our suicidal war on nature, unsustainable levels of inequality, and the unchecked development of new technologies," he said.