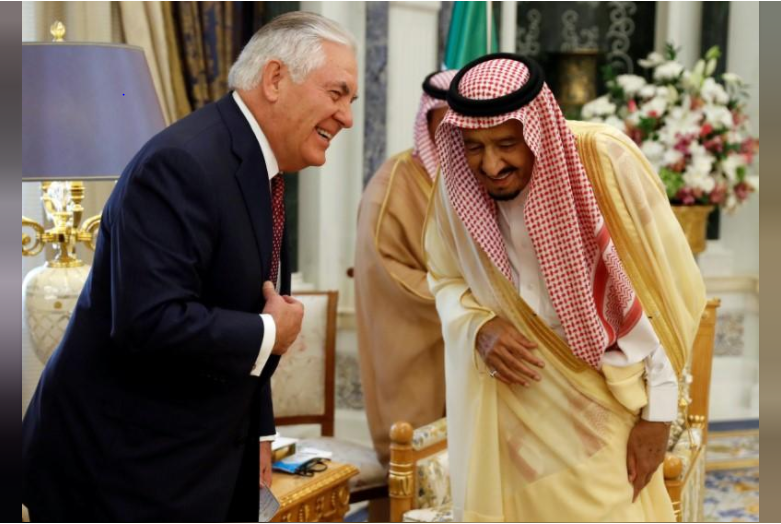 U.S. Secretary of State Rex Tillerson said on Sunday it was time for Iranian-backed militias and their Iranian advisers who helped Iraq defeat Islamic State to “go home”, after a rare joint meeting with the leaders of Iraq and Saudi Arabia.

The United States is concerned that Iran, a Shi‘ite regional power, will take advantage of gains against IS in Iraq and Syria to expand the influence it gained after the U.S. invasion in 2003, something Sunni Arab rivals such as Riyadh also oppose.

“Iranian militias that are in Iraq, now that the fight against Daesh and ISIS is coming to a close, those militias need to go home. The foreign fighters in Iraq need to go home and allow the Iraqi people to regain control,” Tillerson said at a joint news conference with Saudi Foreign Minister Adel Jubeir.

Tens of thousands of Iraqis heeded a call to arms in 2014 after IS seized a third of the country’s territory, forming the Popular Mobilization Forces (PMF), which receive funding and training from Tehran and have been declared part of the Iraqi security apparatus.

A senior U.S. official said Tillerson had been referring to the PMF and the Quds Force, the foreign paramilitary and espionage arm of the powerful Islamic Revolutionary Guard Corps (IRGC).

“Exactly what country is it that Iraqis who rose up to defend their homes against ISIS return to?,” Zarif said in a tweet. “Shameful US FP (foreign policy), dictated by petrodollars.”

Iraq’s military, armed by the United States but supported by the PMF, ejected the ultra-hardline Sunni Muslim militant group from Mosul and other cities in northern Iraq this year. Several thousand U.S. troops are still in the country, mostly for training but also to carry out raids against IS.

The campaign to uproot the militants left whole cities in ruins and has hit Iraq’s economy.

A new joint ministerial-level body between Iraq and Saudi Arabia convened its inaugural meeting earlier on Sunday to coordinate their fight against IS and on rebuilding Iraqi territory wrested from the group.

Jubeir emphasized historic ties between the two neighbors, which share a border, vast oil resources and many of the same tribes.

“The natural tendency of the two countries and people is to be very close to each other as they have been for centuries. It was interrupted for a number of decades. We’re trying now to make up for lost ground,” he said.

The rare senior meeting, signaling a thaw between states that have been at loggerheads for decades, was also attended by Saudi King Salman and Iraqi Prime Minister Haider al-Abadi.

“This will be critical to winning the peace that has been earned through the hard-fought military gains,” he said.

State media said the council had expressed satisfaction with global oil markets’ recovery as a result of a deal with other countries to boost prices by limiting production.

A second meeting will be held in Baghdad but no date was mentioned.

Saudi Commerce and Investment Minister Majid al-Qusaibi told Reuters his country seeks to boost exports and is eyeing investment opportunities in Iraq’s agricultural and petrochemical sectors, among others.

He said backing from the highest levels of both governments would produce “quick results on the ground”.

“Let’s not cry over spilt milk. Whatever happened in the past has happened. The good news is we are all here toward building a prosperous and beneficial future for both countries,” he said in a telephone interview.

Tillerson and Jubeir also discussed Washington’s hawkish new policy towards Iran, including a possible withdrawal from the 2015 nuclear deal and new sanctions on the IRGC.

“Both our countries believe those who conduct business with the Iranian Revolutionary Guard, any of their entities, European companies or other companies around the world really do so at great risk,” Tillerson said.

Relations between Riyadh and Baghdad were cut for 25 years, before recent rapprochement, after former Iraqi President Saddam Hussein invaded Kuwait in 1990. Saudi Arabia, along with the United Arab Emirates, is wooing Baghdad now in an effort to halt the growing regional influence of Iran.

Arriving in Doha later on Sunday for the next leg of a multi-country trip, Tillerson told a news conference that there was little chance of a swift breakthrough to resolve a blockade imposed on Qatar by Saudi Arabia and its Arab allies.

The kingdom, the United Arab Emirates, Egypt and Bahrain imposed trade and travel curbs on Doha in June for alleged support of terrorism and friendship with Iran - charges Qatar denies.

“There is not a strong indication that the parties are ready to talk yet,” Tillerson said.

The secretary of state’s six-day trip will also take him to Pakistan, India and Switzerland.