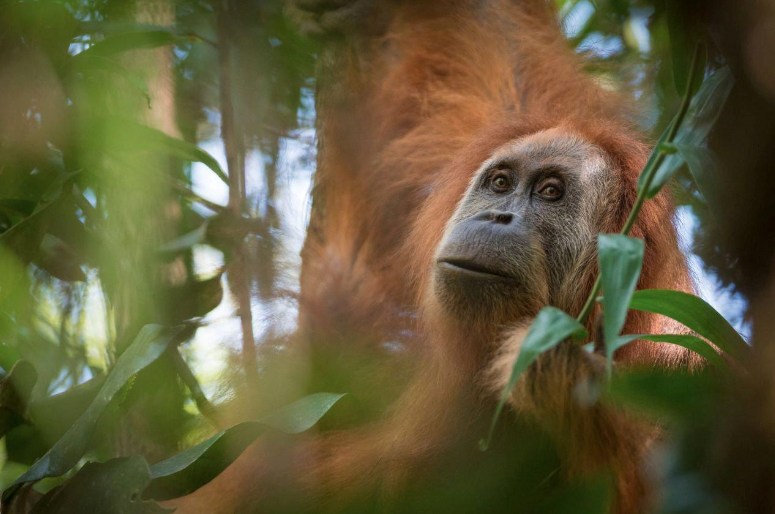 A photo of Pongo tapanuliensis, identified as a new species of orangutan is shown, found on the Indonesian island of Sumatra where a small population inhabit its Batag Toru forest, according to researchers November 2, 2017.    Photo: Reuters/Courtesy Andrew Walmsley

Scientists have identified a new species of great ape on the Indonesian island of Sumatra, finding that a small population of orangutans inhabiting its Batang Toru forest merits recognition as the third species of these shaggy reddish tree dwellers.

Researchers said on Thursday these orangutans boast genetic, skeletal and tooth differences from the two other species of orangutan, meriting recognition as a unique third species. That would bring to seven the number of great ape species worldwide aside from people, alongside Africa’s eastern and western gorillas, chimpanzees and bonobos.

Scientists are worried about the future of the newly identified species, one of humankind’s closest relatives. They have labeled the species the Tapanuli orangutan, with the scientific name Pongo tapanuliensis.

“There are no more than 800 individuals remaining across three fragmented forest areas,” said conservation biologist Matthew Nowak of the Sumatran Orangutan Conservation Programme.

In addition to threats like hunting by humans, Nowak said, “Significant areas of the Tapanuli orangutan’s range are seriously threatened by habitat conversion for small-scale agriculture, mining exploration and exploitation, a large-scale hydroelectric scheme, geothermal development and agricultural plantations.”

Orangutan means “person of the forest” in the Indonesian and Malay languages, and it is the world’s biggest arboreal mammal. Orangutans are adapted to living in trees, with their arms longer than their legs. They live more solitary lives than other great apes, sleeping and eating fruit in the forest canopy and swinging from branch to branch.

“It’s pretty exciting to be able to describe a new great ape species in this day and age,” said University of Zurich evolutionary geneticist Michael Krützen, adding that most great apes species are listed as endangered or critically endangered.

“We must do everything possible to protect the habitats in which these magnificent animals occur, not only because of them, but also because of all the other animal and plant species that we can protect at the same time.”

Orangutans long were considered a single species, but were recognized as having two species in 1996, one in Sumatra and one in Borneo.

The new species lives south of what was the known range for Sumatran orangutans. This population was unknown to scientists until two decades ago. In addition to genetic differences from the other species, the researchers said the skeleton of a Tapanuli orangutan that died after being wounded by villagers showed differences in tooth and skull shape.

The research was published in the journal Current Biology.