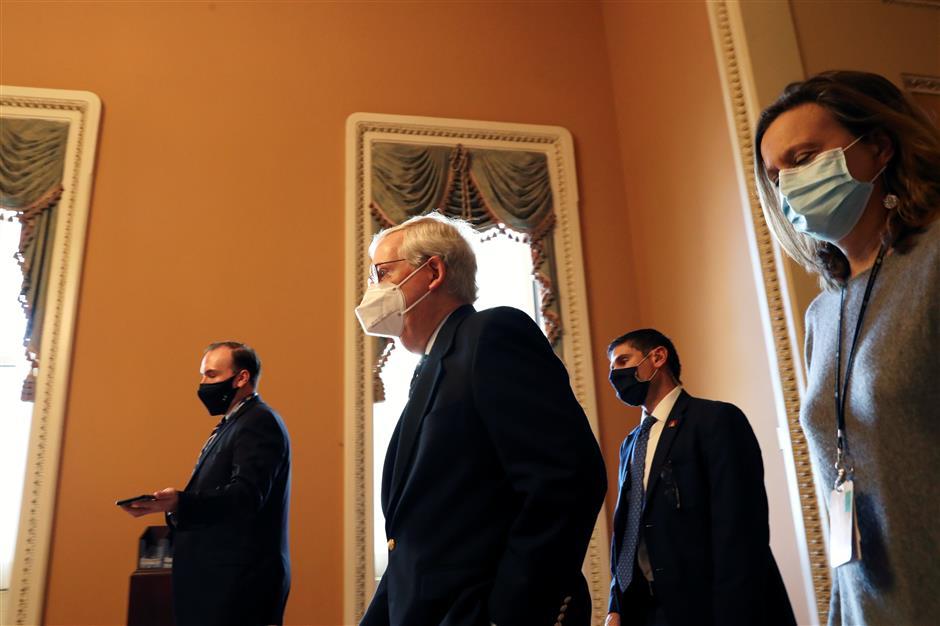 US Senate Majority Leader Mitch McConnell leaves the Senate floor as the Senate faces a decision over approving US$2,000 stimulus checks on Tuesday. (Photo: AP)

United States President Donald Trump’s push for bigger US$2,000 COVID-19 relief checks stalled out in the Senate as Republicans blocked a swift vote proposed by Democrats amid split within their own ranks over whether to boost spending or defy the White House.

The roadblock mounted on Tuesday by Senate Majority Leader Mitch McConnell may not be sustainable as pressure mounts.

Trump wants the Republican-led chamber to follow the House and increase the checks from US$600 for millions of Americans.

A growing number of Republicans have said they will support the larger amount. But most GOP senators oppose more spending.

“There’s one question left today: Do Senate Republicans join with the rest of America in supporting US$2,000 checks?” Senate Democratic leader Chuck Schumer said as he made a motion to vote.

The battle over the US$2,000 checks has thrown Congress into a chaotic year-end session just days before new lawmakers are set to be sworn into office for the new year.

McConnell instead signaled an alternative approach to Trump’s checks that may not divide his party so badly, but may result in no action at all.

The president’s last-minute push for bigger checks leaves Republicans split between those who align with Trump’s populist instincts and those who adhere to what had been more traditional views against government spending.

The two GOP senators from Georgia, David Perdue and Kelly Loeffler, announced on Tuesday they support Trump’s plan for bigger checks as they face Democrats Jon Ossoff and Raphael Warnock in runoff elections that will determine which party controls the Senate.

Other Republicans panned the bigger checks, saying the nearly US$400 billion price tag was too high, the relief is not targeted to those in need and Washington has already dispatched ample sums on COVID aid.