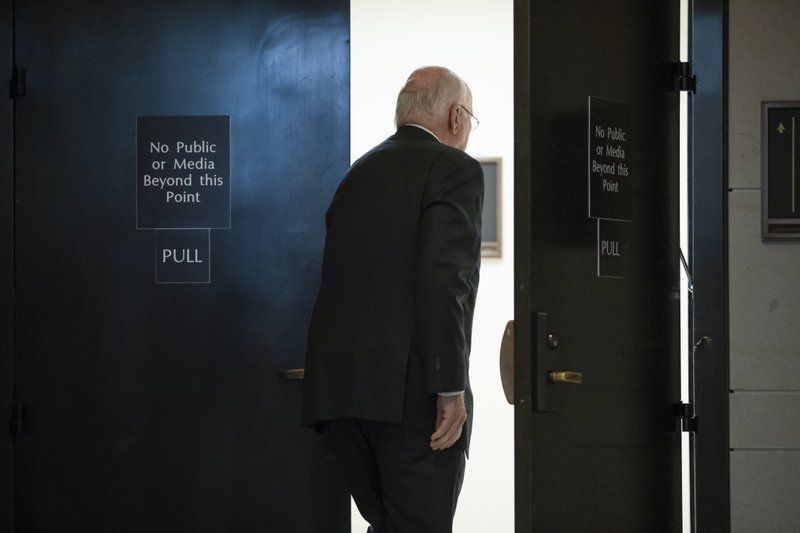 Sen. Patrick Leahy, D-Vt., a senior member of the Senate Judiciary Committee, enters a secure underground room in the Capitol to see a new FBI background file on sexual allegations that have been made against Supreme Court nominee Brett Kavanaugh, in Washington, Wednesday, Oct. 3, 2018. (Photo: AP/J. Scott Applewhite)

A high-stakes partisan row broke out Thursday over a confidential FBI report about allegations that Brett Kavanaugh sexually abused women three decades ago, with Republicans claiming investigators found “no hint of misconduct” but Democrats accusing the White House of slapping crippling constraints on the probe.

At the same time, Republican leaders seemed to show increasing confidence. Judiciary Committee Chairman Chuck Grassley of Iowa said he now expects the Supreme Court nominee to be confirmed in a Senate roll call on Saturday.

In a hardening of battle lines, one of two vacillating Democrats — North Dakota’s Heidi Heitkamp — said she’d oppose the Supreme Court nominee. Heitkamp, facing a tough re-election fight next month, said she was concerned about his past conduct and felt that his angry attacks on Democrats during last week’s Judiciary Committee hearing raised questions about his “current temperament, honesty and impartiality.”

However, in a potential sign of momentum for Kavanaugh, Sen. Jeff Flake, R-Ariz., told CNN that “we’ve seen no additional corroborating information” for the accusations and that the investigation had been comprehensive. Flake, who’s not stated his position on the nomination, was among three Republicans who had pressed President Donald Trump to order the renewed FBI background check.

Democrat Joe Manchin of West Virginia also has not declared how he’ll vote.

The battling commenced as the conservative jurist’s prospects for winning Senate confirmation remained at the mercy of five undeclared senators, including the three Republicans, with an initial, critical vote looming Friday. It followed the FBI’s early-morning release of its investigation.

“There’s nothing in it that we didn’t already know,” Grassley declared. He said he based his view on a briefing from committee aides and added, “This investigation found no hint of misconduct.”

Other Republicans who’d already voiced support for Kavanaugh echoed Grassley, saying after a briefing that there’d been no corroboration of wrongdoing by Kavanaugh. Said Sen. Lindsey Graham, R-S.C., “The senators who requested the supplemental background check got what they requested, and I am ready to vote.”

Top Democrats fired back at Grassley after getting their own briefing.

The Judiciary panel’s top Democrat, Dianne Feinstein of California, said it appeared that the White House had “blocked the FBI from doing its job.” She said that while Democrats had agreed to limit the probe’s scope, “we did not agree that the White House should tie the FBI’s hands.”

Senate Majority Leader Mitch McConnell, R-Ky., has already started a process that will produce a crucial test vote in his polarized chamber Friday on Kavanaugh’s fate. Should Republicans get the majority of votes they need — and Vice President Mike Pence is available to cast the tie-breaker, if necessary — that would set up a decisive roll call on his confirmation, likely over the weekend.

Several senators said 10 witnesses were interviewed for the report. One senator said it was about 50 pages long.

Sen. John Kennedy, R-La., said agents reached out to 10 but spoke only to nine. He said five were witnesses connected to accusations by Christine Blasey Ford and four involved a separate claim by Deborah Ramirez.

Feinstein complained Thursday that agents had not interviewed Kavanaugh or Ford, who has testified that he sexually attacked her in a locked bedroom during a high school gathering in 1982. Feinstein also said attorneys for Ramirez, who’s claimed Kavanaugh exposed himself to her when both were Yale freshmen, had no indication the FBI had reached out to people she’d offered for corroboration.

Grassley said the FBI could not “locate any third parties who can attest to any of the allegations,” and he said there is “no contemporaneous evidence.” He provided no specifics.

Senate Minority Leader Chuck Schumer, D-N.Y., said Democrats’ fears that the “very limited process” laid out for the investigation would restrain the FBI “have been realized.”

He also said, “I disagree with Sen. Grassley’s statement that there was no hint of misconduct.” Neither side provided any detail about what the report said, constrained by years-old arrangements that require the results of FBI background checks to remain confidential.

Earlier, White House spokesman Raj Shah rebuffed Democrats’ complaints, saying, “What critics want is a never-ending fishing expedition into high school drinking.” He said the FBI reached out to 10 people and interviewed nine, including “several individuals at the request of the Senate, and had a series of follow-up interviews ... following certain leads.”

While the FBI interviews were to focus on sexual assault allegations, Democrats have also questioned Kavanaugh’s drinking habits during high school and college and dishonest comments they say he has made about his background. Kavanaugh has said stories of his bad behavior while drinking are exaggerated.

Three women have accused him of sexual misconduct in separate incidents in the 1980s. Kavanaugh, 53, now a judge on the powerful District of Columbia Circuit Court of Appeals, has denied the claims.

The White House received the FBI report around 3 a.m. Thursday.

Trump weighed in hours later in a tweet in which he denounced what he called “the harsh and unfair treatment” of Kavanaugh. “This great life cannot be ruined by mean” and “despicable Democrats and totally uncorroborated allegations!”

Democratic Sen. Tammy Duckworth of Illinois told reporters Thursday that time slots for reading the FBI file are so full that senators are being told they might have to wait until Friday to read it. “They’re so swamped,” she said.

The report arrived at a Capitol palpably tense over the political stakes of the nomination fight and from aggressive anti-Kavanaugh protesters who have rattled and reportedly harassed senators. Feeding the anxiety was an unusually beefy presence of the US Capitol Police, who were keeping demonstrators and frequently reporters at arm’s length by forming wedges around lawmakers walking through corridors.

Barring leaks, it was unclear how much of the FBI report, if any, would be made public. While senators from both sides have expressed support for revealing at least parts of the findings, FBI background checks on nominees are supposed to remain confidential.

With Republicans clinging to a razor-thin 51-49 Senate majority and five senators — including three Republicans — still publicly undeclared, the conservative jurist’s prospects of Senate confirmation could hinge largely on the file’s contents.

Ford, now a California psychology professor, has testified that when the drunken Kavanaugh attacked her, she believed he was trying to rape her.

The FBI interviewed several people, including three who Ford has said attended a 1982 high school gathering in suburban Maryland where she says Kavanaugh’s attack occurred, plus another Kavanaugh friend. The agency has also spoken to a second woman, Deborah Ramirez, who has claimed Kavanaugh exposed himself to her at a Yale party when both were freshmen.