Republicans have succeeded this year in passing a range of voting restrictions in states they control politically, from Georgia to Iowa to Texas. They're not stopping there. 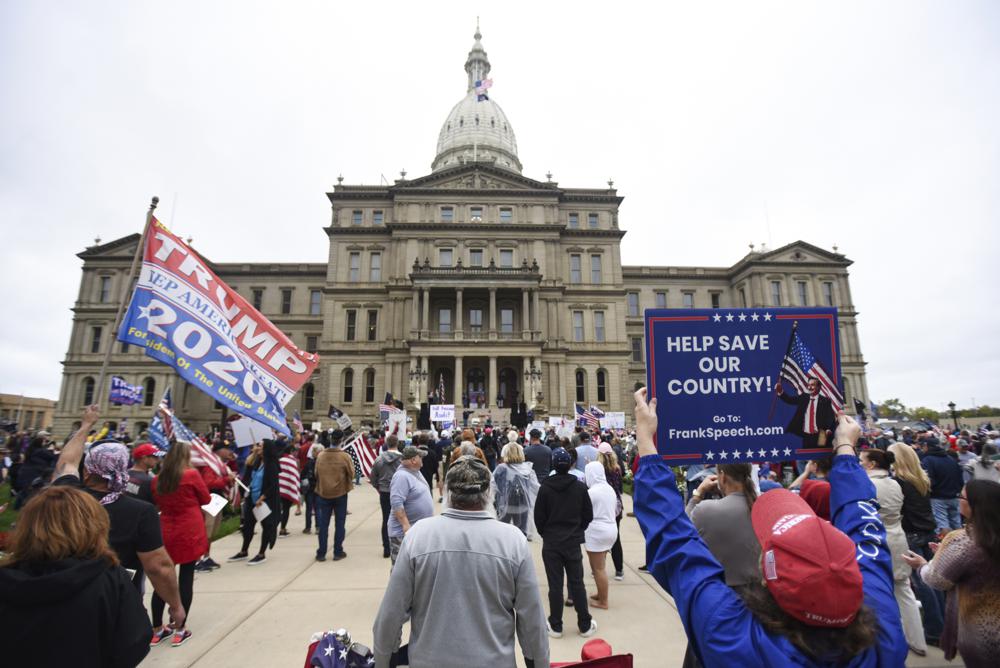 In this Oct. 12, 2021 file photo, rally-goers protest at the Michigan State Capitol in Lansing, Mich. Republicans have had wild success this year passing voting restrictions in states they control politically, from Georgia to Iowa to Texas. (Photo: AP)

Republicans in at least four states where Democrats control the governor's office, the legislature or both — California, Massachusetts, Michigan and Pennsylvania — are pursuing statewide ballot initiatives or veto-proof proposals to enact voter ID restrictions and other changes to election law.

In another state, Nebraska, Republicans control the governor's office and have a majority in the single-house legislature, but are pushing a voter ID ballot measure because they have been unable to get enough lawmakers on board.

Republicans say they are pursuing the changes in the name of "election integrity," and repeat similar slogans — "easier to vote, harder to cheat." Democrats dismiss it as the GOP following former President Donald Trump's false claims that widespread fraud cost him the election. They say Republicans have tried to whip up distrust in elections for political gain and are passing restrictions designed to keep Democratic-leaning voters from registering or casting a ballot.

"It's depressing that this is the way that (the Trump) wing of the Republican Party thinks they have to win, instead of trying to win on issues or beliefs," said Gus Bickford, the Democratic Party chairman in Massachusetts. "They just want to suppress the vote."

A common thread among the Republican proposals is toughening voter identification requirements, both for in-person and mail voting.

In Michigan and Pennsylvania, Republicans are trying to get around Democratic governors who wield the veto pen. Wisconsin Republicans say they also are considering such a strategy.

In California and Massachusetts, Republicans are a minority in both houses of the legislature. In Republican-controlled Nebraska, the hang-up is an officially nonpartisan legislature where more liberal lawmakers can derail legislation that enjoys broad conservative support.

The road to gain voter approval is uphill in California and Massachusetts, but there's a clearer path to success in the other states.

The leader of the California effort, Carl DeMaio of Reform California, said his organization is pursuing a ballot initiative because Democratic lawmakers will never take up his group's proposals.

"That would mean they're validating Donald Trump, and they have so much hatred for Donald Trump that they don't even want to acknowledge that there's even a problem here," DeMaio said.

Trump's baseless election fraud claims aside, DeMaio said Trump's message is resonating with people who have had doubts about the election system based on their own experience, such as getting duplicate ballots mailed to them at home.

Voter fraud is exceedingly rare, and when it's attempted is typically caught by local election offices.

In any case, Democrats say voter ID laws will do nothing to prevent the little fraud that exists. Rather, it will serve only to force the elderly, poor and disabled to go to unnecessary lengths to get proper government-issued identification cards they may not have, they say.

Despite Trump's false claims of a stolen election, his own Justice Department and scores of recounts have debunked them, and courts up to the U.S. Supreme Court have swept aside such assertions. The government's own cybersecurity agency declared the 2020 presidential election the most secure in U.S. history.

No state legislature has produced evidence of widespread election fraud. Even so, at least 10 Republican-controlled states have enacted laws so far this year that toughen voter ID or signature requirements or pare back opportunities to register to vote or cast a ballot.

Putting voter-related matters to a statewide vote is nothing new.

In recent years, for example, voters in California and Florida restored felons' right to vote. In 2018, Michigan voters approved a constitutional amendment allowing people to register on Election Day and request absentee ballots without having to give a reason.

The difference this year is Republicans using the process in an attempt to enact restrictions they couldn't pass otherwise.

In California, Massachusetts and Nebraska, Republicans are trying to gather enough signatures to get their proposals on ballots in next year's general election.

In Michigan, Republicans are using an unusual provision in the state constitution to gather enough petition signatures so the GOP-controlled Legislature can pass a veto-proof voter ID bill.

Among other things, the Michigan initiative would prohibit sending mail-in ballot applications to people who did not request them, with backers saying it sowed confusion and mistrust in 2020.

"Democratic leadership is out of step with their voters," said Jamie Roe, a Republican campaign consultant and strategist with the Secure MI Vote initiative.

Gov. Gretchen Whitmer, a Democrat, is preparing to veto similar legislation on her desk, telling reporters this month that there was not one "scintilla" of evidence of widespread voting fraud in last year's election and that Republicans are simply unhappy over Trump's loss.

"Our elections work. You don't like the outcome? Well, then you run in the next election and try to win and earn people's votes — not cut out a segment of people that cast their ballot as Americans and have a right to do that," Whitmer said.

In Pennsylvania, which allows no direct access to the ballot for citizen initiatives, the earliest the Republican-controlled Legislature could put its election changes on the ballot — through a proposed constitutional amendment — is 2023.

The Pennsylvania proposal is among several that would go beyond changes to voter ID.

As Trump allies go state to state, pushing partisan reviews of last year's presidential election, the measure in Pennsylvania would require election results to be audited by the state's auditor general. It would require paper ballots to bear a watermark and be open to "public inspection" after an election is certified.

The measure is awaiting a vote in the state House, perhaps as early as next week, before it can go to the Senate. Its sponsor, Republican Rep. Jeff Wheeland, said it will "give back to the voters surety" that their elections are safe and secure. Another Republican, Rep. Eric Nelson, said it would let voters "address what many feel is a frenzy of mistrust in our current election system."

Democratic Rep. Malcolm Kenyatta, referring to Trump's loss in the battleground state, said the only reason the measure is coming up "is because some are disappointed in the result of the election."

Under the proposed initiative in California, counties would be required to do more to clean up voter registration rolls, evaluate wait times for in-person voting in every election and show how they will fix "unreasonably long" waits.

In Nebraska, groups including Black Votes Matter and the League of Women Voters have joined forces to oppose the Republican-backed ballot initiative.

John Cartier, director of voting rights for Civic Nebraska, said the initiative would violate Nebraska's constitutional protections for voting access. He said there has never been a single conviction for voter impersonation fraud in the state's history.

Besides, he said, states such as Arizona and Georgia already have tough voter ID laws "and people don't really trust the system there," Cartier said. "So passage of a voter ID law doesn't do anything for trust. If anything, it hurts it."