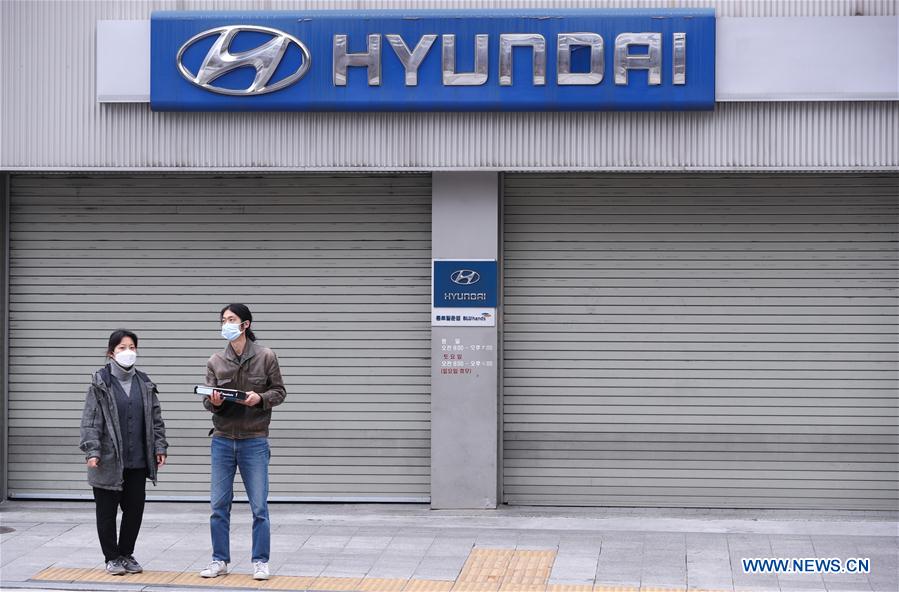 Armenia, the Dominican Republic, and the Czech Republic joined the list of countries reporting their first cases of COVID-19 on Sunday, while the worst-hit countries have been strengthening their efforts in the fight against the epidemic.

The first confirmed case in the Dominican Republic is a 62-year-old tourist from Italy, now in a stable condition in a military hospital, the country's health authority said.

The Czech Republic reported the first three confirmed cases, two of which are in Prague's Na Bulovce Hospital, and the third is in Masaryk Hospital in Usti nad Labem. The two men and a woman have all traveled to Italy recently, said Health Minister Adam Vojtech.

The first confirmed case in Armenia is a male Armenian citizen, who returned on Friday on a repatriation flight from Iran and on Sunday tested positive for COVID-19. As a precautionary measure, 30 others are to be quarantined, according to Prime Minister Nikol Pashinyan.

Many countries facing new confirmed cases have been stepping up their efforts against the disease.

In the United Kingdom, local government on Sunday reported the first confirmed case in Scotland, bringing the total number across the UK to 36. The patient, who recently returned from northern Italy, is being treated in isolation, and clinicians have begun contact tracing.

In light of the situation, the British government has arranged a meeting of its emergency committee, to be chaired by British Prime Minister Boris Johnson on Monday.

The U.S. state of New York confirmed its first case on Sunday, a woman in her late 30s who contracted the virus while traveling in Iran. Meanwhile, Washington State reported its second coronavirus death on Sunday evening, one day after it declared a state of emergency after the first death caused by the disease in the United States was reported in the state.

More cases of COVID-19 of unknown origin have been reported in western U.S. states, triggering concern about local person-to-person spread of the infectious disease. Oregon reported a confirmed case of a patient with no travel history nor close contact with infected individuals.

The U.S. Centers for Disease Control and Prevention has warned the public of an inevitable outbreak of coronavirus within the country.

The Irish Health Department said Sunday that a secondary school in the east of Ireland will be closed for 14 days, after links with the first confirmed COVID-19 case in the country were discovered.

Meanwhile, the governments of some of the worst-hit countries have rolled out extra measures to contain a further spread of the disease.

South Korea confirmed 476 more cases on Monday, taking the total number of infections to 4,212 and the death toll to at least 22.

With virus infections soaring over the past two weeks, the country has raised its four-tier virus alert to the highest level, and designated Daegu and its neighboring county in the south Cheongdo as "special care" zones.

Daegu, about 300 km southeast of the capital Seoul, is the epicenter of the viral spread in the country. The Daegu outbreak has been closely connected with the homegrown religious sect Sincheonji, with 2,113 infections linked to the group as of Sunday morning.

South Korean President Moon Jae-in vowed Sunday to overcome the outbreak through national unity at home and in cooperation with neighboring countries such as the Democratic People's Republic of Korea, China, Japan, and nearby Southeast Asian nations.

Japan has reported more than 900 domestic cases of infection as of Friday, with over 700 related to the Diamond Princess, a cruise ship previously quarantined near Tokyo.

The government has said that the coming two-week period is crucial to containing the spread of the virus. Many large public events have been canceled, as per the government's requirements, while popular theme parks such as Tokyo Disneyland and Universal Studios Japan have been temporarily shut.

The government has also asked all elementary, junior-high and high schools to temporarily close beginning March 2 for around a month.

Hokkaido has declared a state of emergency in the northernmost prefecture, where at least 66 infections have been confirmed as of Friday.

Iran's Ministry of Health and Medical Education said Sunday that the outbreak has affected 987 people and killed 54 in the country.

In the central Yazd city, the construction of a hospital for the exclusive use of treating COVID-19 patients kicked off on Sunday morning, and is expected to be finished within days.

Meanwhile, people showing symptoms have been barred from leaving the city of Qom, where the country's first two cases were reported, while educational centers have been shut down in cities and provinces seriously hit by the virus. Iran's parliament also said Friday it would stop working temporarily.

Italy on Sunday reported a total of 1,577 confirmed cases and a death toll of 34. A total of 15 regions and one autonomous province have seen infections, with most of those infected in the northern part of the country, including Lombardy, Emilia-Romagna, and Veneto.

Giovanni Rezza, head of the Italian High Institute of Health's Department of Infectious Diseases, said peak acceleration in Italy was still several days away, while most containment measures were put into place a week ago.

The cabinet passed a first package of measures to support households, companies, and economic sectors in the worst affected areas on Friday, and a second package to contain the impact on the overall domestic economy was announced.

By 1500 GMT on Sunday, data from the World Health Organization (WHO) showed that 87,161 cases have been confirmed in 60 countries, and death cases have increased to 2,980.

On Friday, the WHO raised the risk assessment of COVID-19 from "high" to "very high" at the global level, as an increasing number of cases in more countries were reported over the last few days.