WORLD Government shutdown begins and so does the finger-pointing

Government shutdown begins and so does the finger-pointing 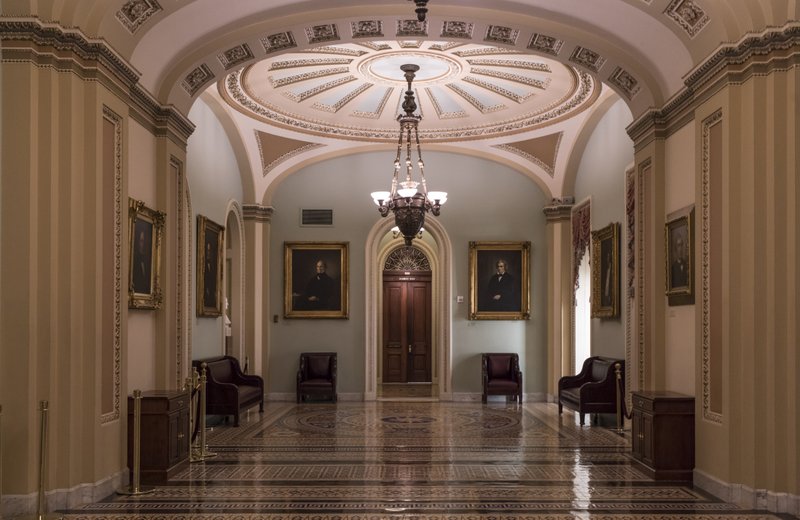 Americans awoke Saturday to learn that quarreling politicians in Washington had failed to keep their government in business, halting all but the most essential operations and marring the anniversary of President Donald Trump’s inauguration.

It was a striking display of Washington dysfunction, and the finger-pointing came quickly. Trump tweeted that Democrats “wanted to give me a nice present” to mark the start of his second year in office.

The Republican-controlled Congress scheduled an unusual weekend session to begin considering a three-week version of a short-term spending measure and to broadcast to the people they serve that they were at work as the closure commenced. It seemed likely that each side would push for votes aimed at making the other party look culpable for shuttering federal agencies.

Democrats say they oppose the three-week plan, which they view as a way to stall negotiations over the future of the “Dreamers” — the young immigrants brought to the U.S. as children and facing possible deportation when their protection expires in March. Republicans declared they would not reopen talks until the government shutdown ends, a strategy aimed at trying to erode Democratic cohesion.

“Negotiations will not go on until we open the government up and start being serious about the fundamental issue that is before us all,” Rep. Mark Meadows, a conservative leader, said Saturday.

House Democratic leader Nancy Pelosi said Saturday on the House floor that Trump had earned an F for “failure in leadership.” She said Republicans are “so incompetent and negligent that they couldn’t get it together to keep the government open.”

The fourth government shutdown in a quarter-century began at the stroke of midnight Friday, shortly after Senate Democrats blocked a four-week budget extension and a flurry of last-minute negotiations could not beat the clock.

The closure began at the start of a weekend, so many of the immediate effects will be muted for most Americans. Damage could build quickly if the closure is prolonged. And it comes with no shortage of embarrassment for Trump and political risk for both parties, as they wager that voters will punish the other at the ballot box in November.

Trump said Democrats “could have easily made a deal but decided to play Shutdown politics instead.” In a series of tweets hours after the shutdown began, the president tried to make the case for Americans to elect more Republicans to Congress in November “in order to power through this mess.” He noted that there are 51 Republicans in the 100-member Senate, and it often takes 60 votes to advance legislation.

Social Security and most other safety-net programs are unaffected by the lapse in federal spending authority. Critical government functions will continue, with uniformed service members, health inspectors and law enforcement officers set to work without pay. But if no deal is brokered before Monday, hundreds of thousands of federal employees will be furloughed.

After hours of closed-door meetings and phone calls, the Senate scheduled its late Friday night vote on a House-passed plan. It gained 50 votes to proceed to 49 against, but 60 were needed to break a Democratic filibuster.

Democrats balked in an effort to put pressure on the White House to cut a deal to protect immigrants brought to the country as children and now here illegally — commonly called “Dreamers” — before their legal protection runs out in March.

Democrats are laying fault for the shutdown on Republicans, who control both chambers of Congress and the White House and have struggled with building internal consensus. Republicans are holding Democrats responsible after they declined to provide the votes needed to overcome a filibuster over their desire to force the passage of legislation to protect some 700,000 younger immigrants from deportation.

“Democrats are far more concerned with Illegal Immigrants than they are with our great Military or Safety at our dangerous” border with Mexico, Trump tweeted.

Republicans branded the confrontation a “Schumer shutdown,” after New York’s Chuck Schumer, the Democratic leader. He said a “Trump shutdown” was more accurate.

Earlier Friday, Trump had brought Schumer to the White House in hopes of cutting a deal on a short-term spending agreement.

The two New Yorkers, who pride themselves on their negotiating abilities, started talking over cheeseburgers about a larger agreement that would have included greater military spending and money for a Southern border wall. But the talks fell apart almost as abruptly as they started.

Nonetheless, White House budget director Mick Mulvaney predicted a deal would be reached by Monday, when most government offices are to reopen after the weekend.

Trump had been an unreliable negotiator in the weeks leading up to the showdown. Earlier this week he tweeted opposition to the four-week plan, forcing the White House to later affirm his support. He expressed openness to extending the Deferred Action for Childhood Arrivals program, only to reject a bipartisan proposal. His disparaging remarks about African and Haitian immigrants last week helped derail further negotiations.

Trump had been set to leave Friday afternoon to attend a fundraiser at his Palm Beach, Florida, estate marking the inauguration anniversary but delayed his travel.

The last shutdown came in 2013. Tea party Republicans, in a strategy not unlike the one Schumer is employing now, sought to use a must-pass budget bill to try to force President Barack Obama to delay implementation of his health care law. At the time, Trump told “Fox & Friends” that the ultimate blame for a shutdown lies at the top. “I really think the pressure is on the president,” he said.

Arguing that Trump’s predecessors “weaponized” that shutdown, Mulvaney said his budget office would direct agencies to work to mitigate the impact this time. That position is a striking role reversal for the conservative former congressman who was one of the architects of the 2013 shutdown.