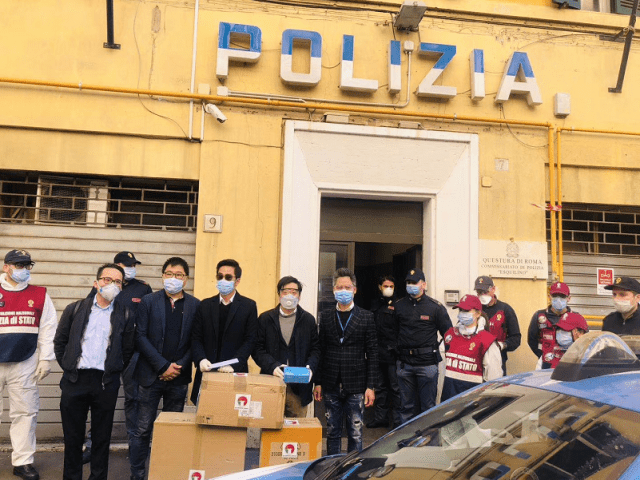 On March 23 of Italian time, Zeng bufeng, president of the Federation of Overseas Chinese and Chinese Youth in Italy, received a special handwritten letter from Carmine Esposito, governor of the Rome provincial police that read "Thank you very much for the 3,500 masks you donated! We will give them to the patrolling policemen as soon as possible. They are in great need of the masks."

Zeng Bufeng said that a few days ago, he received an email requesting support from the local police station in Rome. Because of the shortage of epidemic prevention materials, they decided to seek help from the local overseas Chinese. After reading the mail, Zeng Bufeng made a quick decision and began to collect masks with the local overseas Chinese. With the help of Zhang Guoquan, vice chairman of the Ouhai district Overseas Chinese Federation, they finally collected enough masks and donated 3,500 and 1,000 masks to the Roman police station and the National Police Association respectively on the morning of March 23.

"We haven't heard any information about overseas Chinese infected with COVID-19 in Roma yet,” said Zeng Bufeng. The panic at the early stage of the accelerated spread of the epidemic in Italy has gone, and the mood of the overseas Chinese in Italy has gradually stabilized. Everyone has taken effective protective measures and their businesses have all been paused long before the Italian government decided to close the cities. All of them are self-quarantined at home.

On March 10, Zhejiang Institute of Traditional Chinese Medicine donated 10,000 copies of preventive traditional Chinese medicine granules to the Italian Overseas Chinese Youth Association. Zeng Bufeng said that these granules had arrived in Rome, Italy, a few days ago and that the federation organized on-site collection and distribution in the warehouse district of Rome. The federation delivered the materials to the local overseas Chinese for whom the on-site collection was not convenient in a timely manner.