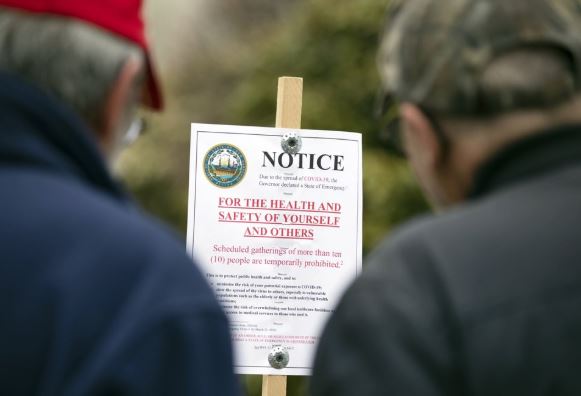 Tom Ploszaj, left, and Tony Stelik read a sign prohibiting gatherings of 10 or more people as they arrive at the State House for a scheduled protest against the state lockdown due to COVID-19, Saturday, April 18, 2020, in Concord, NH. (Photo: AP)

Stores in Texas can begin selling merchandise with curbside service, and hospitals can resume nonessential surgeries. In Florida, people are returning to beaches and parks. And protesters are clamoring for more.

Governors eager to rescue their economies and feeling heat from demonstrators and President Donald Trump are moving to ease restrictions meant to control the spread of the coronavirus, even as new hot spots emerge and experts warn that moving too fast could prove disastrous.

Protests against stay-at-home orders organized by small-government groups and Trump supporters were planned for Saturday in several cities after the president urged supporters to “liberate” three states led by Democratic governors.

But protests were planned in Republican-led states, too, including at the the Texas Capitol. Republican Gov. Greg Abbott already has said that restrictions would begin easing next week.

Rhode Island, sandwiched between the hot spots of Massachusetts and New York, has seen a steady daily increase in the number of infections and deaths, with nursing home residents accounting for more than 90 of the state’s 118 deaths. The state’s death rate of around 10 people per 100,000 population is among the highest per capita in the nation, according to data compiled by the COVID Tracking Project.

Massachusetts had its highest number of deaths in a single day on Friday with 159. Republican Gov. Charlie Baker said it would be premature for states to begin lifting restrictions when deaths are still climbing.

Citing the advice of health experts, he said states should look for infection rates and hospitalizations to be on the decline for about two weeks before acting.

Trump, whose administration waited months to bolster stockpiles of key medical supplies and equipment, appeared to back protesters taking to the streets in several US states to vent their anger with the economy-strangling restrictions.

“LIBERATE MINNESOTA!” “LIBERATE MICHIGAN!” “LIBERATE VIRGINIA, ” Trump said in a tweet-storm in which he also lashed out at New York Gov. Andrew Cuomo, a Democrat, for criticizing the federal response. Cuomo “should spend more time ‘doing’ and less time ‘complaining,’” the president said.

Trump is pushing to relax the US lockdown by May 1, a plan that hinges partly on more testing.

Public health officials said the ability to test enough people and trace contacts of those who are infected is crucial before easing up on restrictions, and that infections could surge anew unless people continue to take precautions.