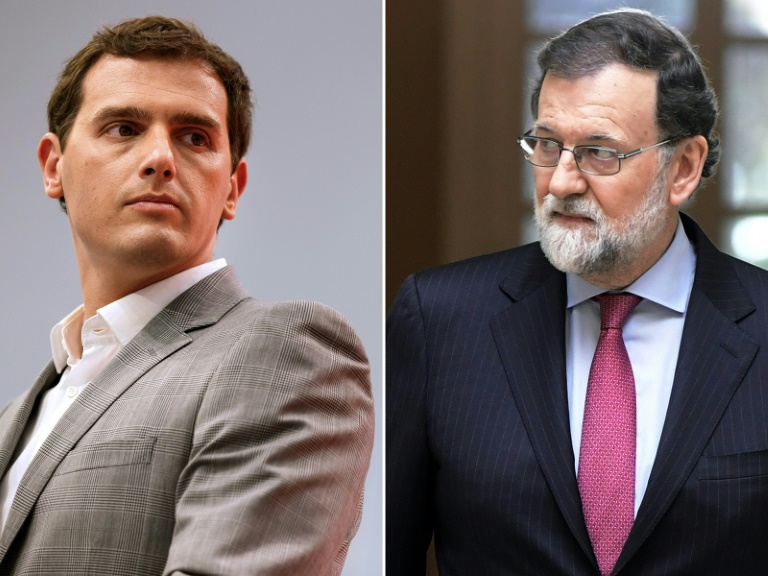 Spanish Prime Minister Mariano Rajoy on Friday faced a Socialist no-confidence motion and calls for a snap election after his Popular Party was found guilty of benefiting from illegal funds in a massive graft trial.

Spain's biggest opposition party, the Socialists, filed the motion seeking Rajoy's ouster in the 350-seat lower house of parliament, a day after the court ruling was announced.

No date has been set for the vote on the motion, which could not take place before next week.

Rajoy responded angrily, accusing Socialist leader Pedro Sanchez of trying to gain power "at any cost", and warned that the motion would damage Spain's economic recovery and stability just days after parliament approved his 2018 expansionist budget.

"It is bad for Spain," he told a news conference.

To succeed, the motion will need the support of an absolute majority of 176 lawmakers, a difficult task as the opposition parties are deeply divided.

The Socialists would need the support of anti-establishment Podemos party, which has already called a no-confidence vote, as well as that of several tiny regional parties, including Catalan separatist formations which have clashed with Sanchez in recent months over their independence drive.

Rajoy's allies Ciudadanos, which has overtaken his Popular Party (PP) in some recent polls thanks to its hard line on Catalan separatism, immediately said it would oppose the no-confidence motion and instead called for snap polls, a demand Rajoy rejected.

"We need a clean and strong government to confront the separatist challenge. Either Rajoy calls elections or parliament will do it," Ciudadanos head Albert Rivera said in a Twitter message.

Analysts said Ciudadanos has no reason to support a no-confidence motion that could lead to an alternative left-wing government headed by the Socialists.

Spain's National Court said Thursday it had uncovered a vast system of bribes given to former PP officials in exchange for lucrative public contracts between 1999 and 2005 in various regions including Madrid.

The court sentenced 29 people in jail for a total of 351 years for corruption, embezzlement and money laundering in the so-called Gurtel trial, named after the code name of the police investigation.

The PP itself was not on trial for direct involvement in the scheme but was found to have benefited from funds obtained illegally. It was ordered to pay back 245,000 euros ($290,000).

"There is only one person responsible for the crisis of confidence... and his name is Mariano Rajoy," Sanchez told reporters, adding that the prime minister's response to the sentence had been "to look the other way".

Rajoy reaffirmed that the PP, which lost its absolute majority in parliament two years ago, would appeal the court's ruling.

Under Spanish law, lawmakers can not simply vote to oust the government with a no-confidence vote and hold elections. Instead, they need to agree on who the next leader should be, making it harder for opposition parties to reach consensus.

There is only a "20 percent probability" that the motion will succeed since "opposition parties will be unable to coordinate in order to oust Rajoy," said Teneo Intelligence analyst Antonio Barroso.

But political consultant Ignacio Varela said "Sanchez could win the no-confidence motion with a Frankenstein majority" that groups several, contradictory parties, although he warns the Socialists would find it hard to govern after and would have to negotiate "each step" with Catalan separatists.

Spain's benchmark Ibex-35 index of most traded shares fell by over two percent spooked by the political turmoil.

"Chances of completing the full four-year term were always minimal given PP's position in Congress so it was just a matter of reaching the right time/find the right trigger," he added.