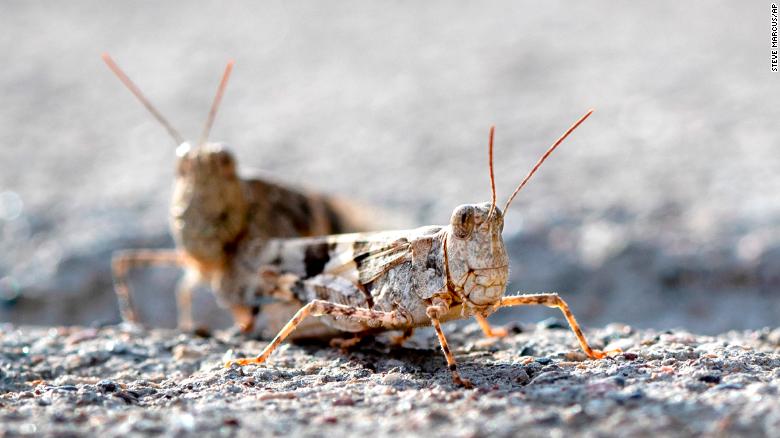 Massive swarms of grasshoppers have descended on the Las Vegas Strip this week, startling tourists and residents as they pass through town on their northbound migration.

Videos posted on social media show swarms of the bugs, called pallid-winged grasshoppers, converging on the bright neon lights of the Strip and sidewalks covered with the insects.

The Nevada Department of Agriculture said the rare invasion was linked to an unseasonably wet winter and spring.

Jeff Knight, an entomologist at the Agriculture Department, said while the insects may freak out many, they are harmless and not a sign of the end of time.

"They don't carry any diseases. They don't bite. And they are not even one of the species that we consider a problem," Knight told reporters on Friday. "They probably won't cause much damage in a yard."

He said the grasshoppers, measuring about 1.5 inches (3.80 centimetres), will all have flown out of the Las Vegas area within a couple weeks at the most.

"They're moving through," he said. "Basically, they come in, settle in, then at night they take off and fly."

He said the best away to avoid attracting the insects, which are drawn to ultra violet light, is to install yellow or amber lights which should deter them.

And in the event the bugs end up inside a home, Knight had simple advice.

"Just use a vacuum cleaner," he said.