The Great Lakes region is warming faster than the rest of the US, a trend likely to bring more extreme storms while also degrading water quality, worsening erosion and posing tougher challenges for farming, scientists reported Thursday. 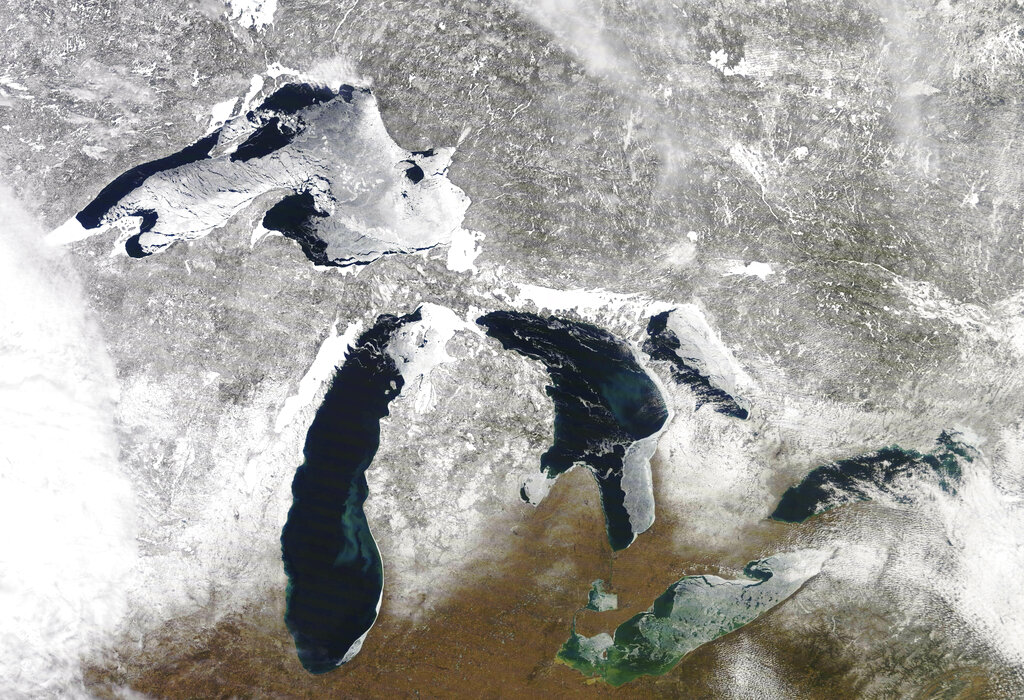 In this March 12, 2019 satellite photo provided by NOAA, shows the Great Lakes in various degrees of snow and ice. (Photo: AP)

The annual mean air temperature in the region, which includes portions of the US Midwest , Northeast and southern Canada, rose 1.6 degrees (0.9 Celsius) from 1901-60 and 1985-2016, according to the report commissioned by the Chicago-based Environmental Law & Policy Center. During the same periods, the mean temperature for the remainder of the contiguous US rose 1.2 degrees (0.7 Celsius).
Warming is expected to continue this century, with rates depending on the volume of heat-trapping gases such as carbon dioxide and methane that humans pump into the atmosphere. As the air warms, it will hold more moisture, which likely will mean heavier winter snowstorms and spring rains — with more flooding in vulnerable areas. Yet summers will be hotter and drier.
"Climate change is already affecting the climate of the Great Lakes region and the physical behavior of the Great Lakes themselves," said Don Weubbles, an atmospheric scientist at the University of Illinois and former assistant director of the Office of Science and Technology Policy in the Obama administration.
The Great Lakes hold about one-fifth of the world's surface fresh water and are so large that they influence regional weather. They keep nearby lands cooler in summer and warmer in winter than those farther inland, while their humidity fuels "lake-effect" snowfall and summer rains. In addition to providing drinking water for millions of people, they are the backbone of an economy built on manufacturing, agriculture and tourism.
A warming climate will add to stresses the lakes have suffered from industrial pollution and development, particularly overflows from urban sewer systems that carry harmful bacteria, said the report produced by 18 scientists, most from Midwestern universities as well as the National Oceanic and Atmospheric Administration.
While annual US precipitation increased 4 percent between 1901 and 2015, it jumped nearly 10 percent in the Great Lakes region, with much of the increase due to unusually large storms, the report said. Future precipitation is likely to happen less evenly, decreasing 5 to 15 percent in the summer by 2100.
Heat waves should become more common, posing risks for the elderly and children with asthma. By the end of the century, the region should have up to 40 additional days with temperatures exceeding 90 degrees (32.2 Celsius).
Winter snowfall should decrease in most places, although locales accustomed to "lake-effect" squalls can expect them to dump even more snow — particularly along the Lake Ontario snowbelt in New York.
The study did not include a cost-benefit analysis of a warming climate's likely results. Several of the scientists said in a phone news conference there may be some bright spots but that the economic impact would be mostly negative.
The region could have longer growing seasons, said Brad Cardinale of the University of Michigan's Cooperative Institute for Great Lakes Research. But the report suggests that benefit could be offset by wetter springs that make it harder to plant crops, plus increasing drought and heat in summer. Corn and soybean yields are expected to drop 10 to 30 percent by the century's end.
Drinking water quality will be degraded by more releases of untreated sewage during heavy storms and runoff of nutrients that feed harmful algae blooms, some toxic. While such blooms are common on Lake Erie and portions of Lakes Huron and Michigan, they've also begun showing up in deep, frigid Lake Superior — an unprecedented development, said Lucinda Johnson of the University of Minnesota at Duluth.
Beaches, dunes and shorelines will experience more erosion from heavier rainfall, the report predicted.
It's uncertain how climate change will affect water levels in the Great Lakes, which already fluctuate periodically, the scientists said. Warmer temperatures will produce less ice cover, boosting evaporation and pushing levels down. But they could rise in years with especially heavy precipitation and temporary deep freezes caused by southward migration of frigid polar air.
Although the Trump administration has reversed federal policies intended to prevent climate change, states and local governments can take measures such as increasing energy efficiency, stepping up use of renewable sources and preventing runoff of nutrient-rich manure from large livestock farms, said Howard Learner, president of the Environmental Law & Policy Center.
"We cannot wait for the Trump administration to accept sound science," Learner said. "We need to step up and act."