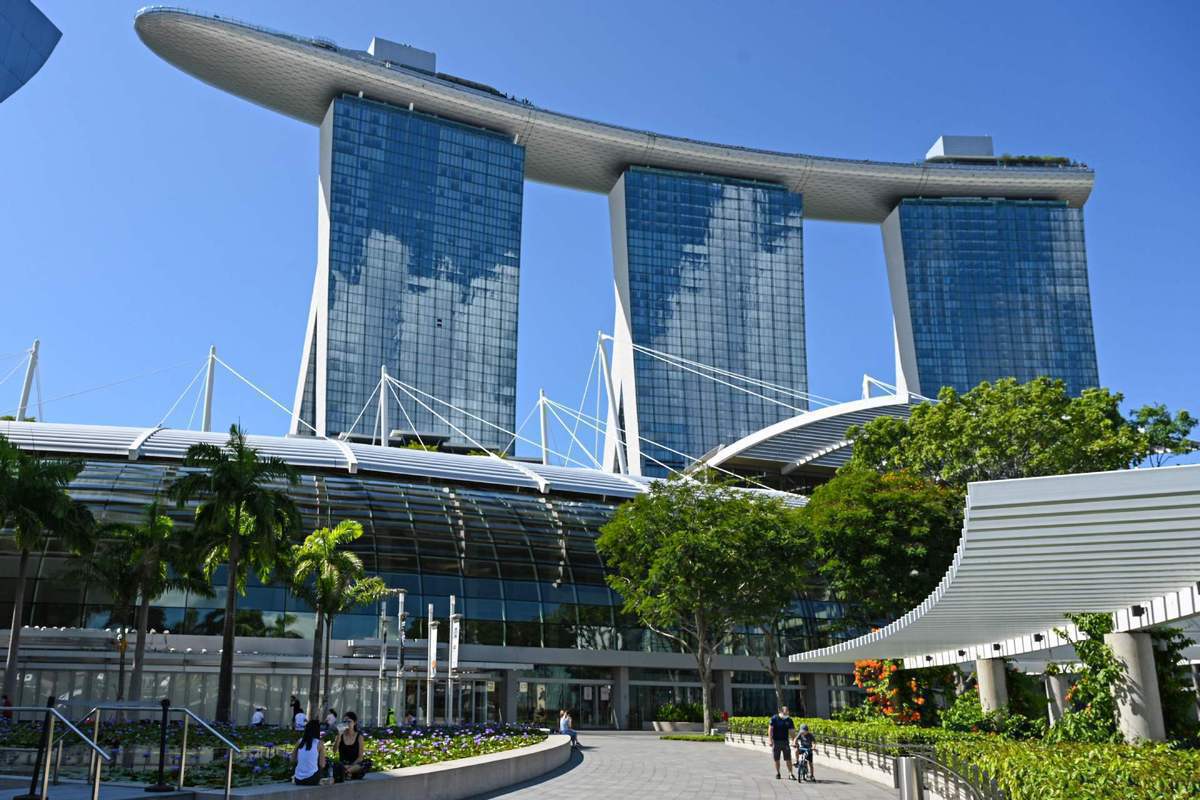 This photograph taken on June 14, 2021, shows people sitting next to a pond outside the Marina Bay Shoppes shopping center in Singapore. [Photo/Agencies]

Workers in the informal sector need institutional support so that they can move to jobs that will provide them with social security and benefits, according to participants at a regional labor forum.

This is especially important in the Asia-Pacific region where nearly 70 percent of the workers are in the informal sector, speakers said during the International Labor Organization's 17th Asia-Pacific Regional Meeting, or APRM, which is being held in Singapore.

Representatives from the government, employer and worker sectors weighed on this issue at the four-day conference that began on Dec 6.

Sonia George, general secretary of the India-based Self-Employed Women's Association, or SEWA, trade union, said workers in the informal sector are the "most marginalized" members of the workforce.

She said the pandemic has been a big challenge, as those workers do not have the social protection that can cushion the impact of an economic slowdown and job losses. As the global economy recovers from the pandemic, George said it is important to not only address the issue restoring livelihoods but also to define the rights of the informal workers.

"It's important … for countries and social partners to define the informal economy," George said in a panel discussion. She said social security schemes, for example, need to be more inclusive and cover the informal sector.

Career transition is difficult for most workers owing to lack of institutional support, according to Sara Elder, senior lead economist at the ILO's regional economic and social analysis unit.

To transition jobs from the informal sector, "one way of doing that is it has to do with the registration of the enterprises," she said. "Most of these jobs are not jobs per se. These are livelihoods. There are people that are doing their own micro enterprises and we need to convince them," Elder said.

Some countries are taking the issue of transition to formal employment very seriously now, she said.

In its latest employment and social outlook released on Dec 7, the ILO said the pandemic exposed the "precarity of the region's informal workers". While labor laws and expanded government wage subsidy programs protected those in the formal employment sector, "most informal workers were left to their own devices to sustain themselves and their families," according to the ILO.

"As economies and labor markets in all regions struggle to get back on track after experiencing the most significant setbacks since the Second World War, it is important to consider what 'on track' means and whether it is the right track for the longer-run transformation of countries," the ILO said.

While Asia-Pacific economies have been booming in the pre-pandemic era, the ILO said the region only had "limited gains on decent work outcomes".

Florence Willie, executive director of Employers' Federation of Papua New Guinea, said informal work is a greater burden for women as it is usually women in developing countries who end up in this sector. She said labor market institutions need to be strengthened to support the transition to formal work.

Employers also need this support as this will "enable us to participate and use our productive role" in supporting the transition from informal to formal work, Willie said. She cited how the pandemic has accelerated digital transformation, and said she hopes that this will continue as most small and medium enterprises are using digital technology to grow their business.

Shayma Al Awadhi, acting assistant undersecretary for communication and international relations at the United Arab Emirates, said her country has launched an unemployment insurance scheme in partnership with the private sector to offer more protection to workers.

Apart from providing wage subsidies to workers who lost their jobs, the scheme also covers the cost of repatriation for migrant workers. The UAE is one of the world's biggest labor receiving countries.

"We have strong partnerships with the embassies of the countries. We (coordinate) with them in case they want to return our workers to their own countries," Al Awadhi said.

The official added that during the pandemic, the UAE "established a virtual labor market where workers who have lost their jobs (were) able to apply for temporary employment in the UAE".

Jan Yumul contributed to this story from Singapore.