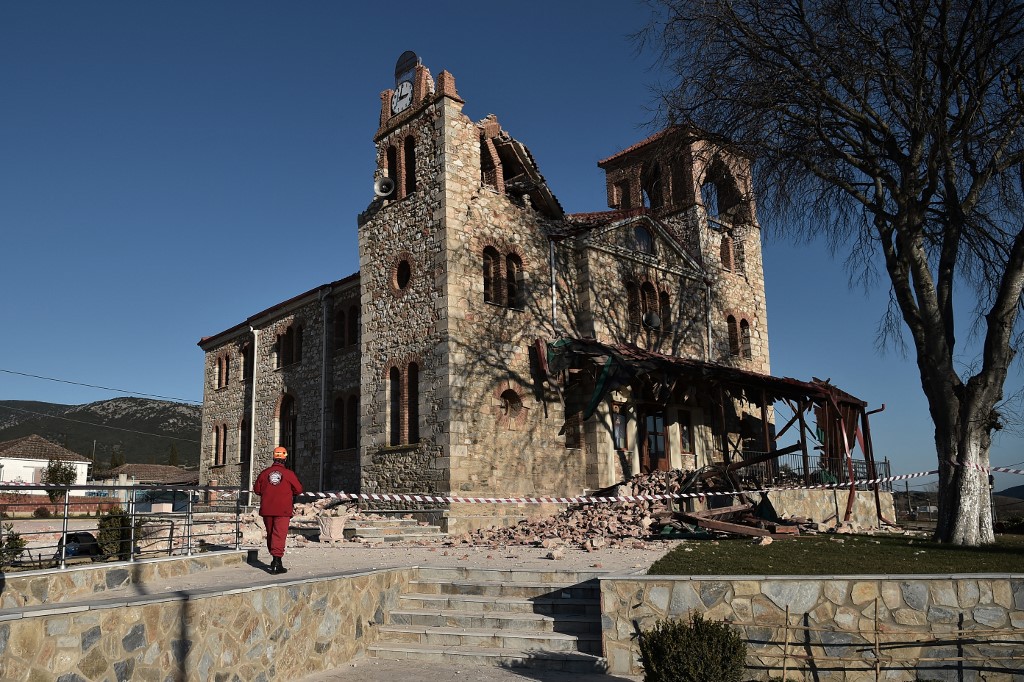 A man walks past a damaged church in the village of Mesohori, near the town of Tyrnavos, after a strong 6,3-magnitude earthquake hit the Greek central region of Thessaly on March 3, 2021. (Photo: AFP)

Engineers in central Greece on Thursday were assessing the damage from a strong 6.3 magnitude quake that injured at least 11 people, damaged hundreds of buildings and spread panic.

The recovery work began as scores of people from the villages of Damasi and Mesochori, some 240 kilometres (149 miles) north of Athens, spent the night away from their homes after Wednesday's quake, many sleeping in their cars.

Civil protection officials said tents had been set up at Damasi's outdoor stadium for temporary accommodation, in addition to five hotels in the nearby town of Trikala and the main city of Larissa.

Repeated aftershocks have struck the area, including a strong 5.2 magnitude tremor on Wednesday evening.

Crews inspected schools, hospitals and other vital public buildings in the area, in addition to homes, state news agency ANA said, adding that schools were closed on Thursday.

The earthquake also appears to have affected the water supply around the Larissa area, with many households reporting cloudy water.

The local water company has warned consumers in affected areas to avoid drinking tap water for at least a day.

An elderly disabled man in Mesochori had a narrow escape when an entire side of his house collapsed, and over 60 children at the Damasi school, built over 80 years ago, were able to leave the building unharmed.

The state ambulance service said it had given assistance to 10 slightly injured people.

In the main city of Larissa, a 55-year-old man was hospitalised with head injuries after being hit by falling masonry, a local hospital supervisor told AFP. He is believed to have escaped immediate danger.

The culture ministry said four churches, including one dating back to the 17th century, had been damaged.

The US Geological Survey said Wednesday's 12:16 pm (1016 GMT) quake, which was felt across mainland Greece, was of 6.3 magnitude.

The Institute of Geodynamics in Athens has measured the quake at a magnitude of 6.0.

According to the Athens observatory, the epicentre was 16 kilometres (10 miles) south of the town of Elassona and eight kilometres deep.

Experts have stressed that fault lines in the area rarely produce tremors larger than the one registered on Wednesday.

"It is 99.9 percent (certain) that it was the main quake. Local fault lines have a ceiling of 6.2 magnitude," Efthymios Lekkas, head of Greece's quake protection authority, told reporters in Damasi.

Greece is located on a number of fault lines, and is sporadically hit by earthquakes. But they mostly occur at sea and do not cause casualties.

In October, a 7.0 magnitude quake struck in the Aegean Sea between the Greek island of Samos and the city of Izmir in western Turkey. Two teenagers died on the island of Samos in a building collapse.