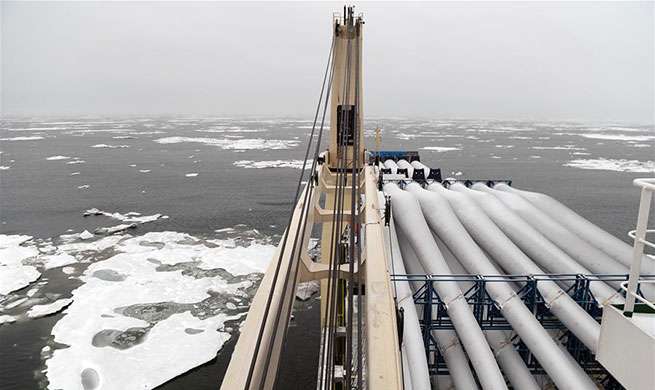 ATHENS, Jan. 2 (Xinhua) -- Greece, Cyprus, and Israel signed on Thursday in Athens an intergovernmental agreement for the construction of the Eastern Mediterranean (EastMed) natural gas pipeline, which is to link the region's gas reserves to Greece and the rest of Europe.

The project aims to "contribute to the energy security of EU member states by diversifying energy sources and paths," said an emailed press statement issued by the Greek Prime Minister Kyriakos Mitsotakis' office after the signing ceremony.

The agreement was signed in the presence of Mitsotakis, his Israeli counterpart Benjamin Netanyahu, and Cypriot President Nicos Anastasiades, by the energy ministers of the three countries.

Thursday's deal -- which follows an initial framework agreement signed last year in Israel -- contains provisions on measures for the protection and security of the pipeline, as well as the regulatory-licensing framework for facilitating the project and the common taxation framework that governs it, Greek national news agency AMNA reported, citing government sources.

At a joint press conference after the signing of the agreement, all three leaders stressed that the EastMed was a "pipeline of peace."

The agreement for the EastMed "has a financial, development, diplomatic and geostrategic aspect. It is one of the largest pipelines of natural gas in the world. (It) will have obvious positive benefits for the participating countries, but will also contribute to peace and geopolitical stability," Mitsotakis said at the press conference.

"The cooperation we have developed is not aimed against any third country. On the contrary, any country wishing to take part, is most welcome as long as it fully complies with the principles of international law," Anastasiades added.

"From every point of view, this is a day of history," Netanyahu stressed on his part.

The EastMed pipeline is scheduled to run across the Mediterranean Sea from the gas reserves which have been found off Israel in recent years to Crete Island, western Greece and then to Italy.

The project could also accommodate future gas finds in waters off Cyprus and Greece, where exploration is under way.

Italy is expected to sign the agreement at a later stage, the Greek government has said.

The pipeline will be 1,872 km long with initial capacity of 10 billion cubic meters (bcm) of gas annually at a minimum budget of 5.2 billion euros (5.81 billion U.S. dollars), and could expand to twice that with the latest compression technology, according to a Greek Environment and Energy Ministry press release.

The ministry added that the pipeline will provide Greece with a geopolitical advantage compared to alternative solutions for the distribution of North Mediterranean natural gas.

The project, which is backed by the European Union and the U.S., aims to help diversify Europe's energy sources, said the three parties.

Earlier on Thursday in Athens, the Public Gas Corporation of Greece (DEPA) signed a letter of intent with the London-based Energean Oil & Gas company for the supply of 2 billion cubic meters (bcm) of natural gas annually from Energean's gas fields offshore Israel through the EastMed.

It was the first commercial agreement sealed for the pipeline, noted an e-mailed joint press release issued by the two companies. (1 euro = 1.12 US dollars)