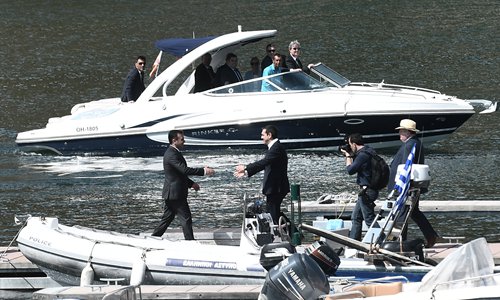 Greece and Macedonia set aside three decades of dispute on Sunday as they agreed on a new name for the former Yugoslav republic, paving the way for its possible admission to the European Union and NATO.

The foreign ministers of the two countries signed an accord to rename the former Yugoslav republic the "Republic of North Macedonia," despite angry protests on both sides of the border over a deal seen as a national sellout by some on both sides.
In the idyllic setting of Prespes, a lake region that borders Greece, Macedonia, leaders from the two countries embraced and shook hands in the presence of European and United Nations officials.
The agreement still requires the approval of both parliaments and a referendum in Macedonia. That approval is far from assured, as it faces stiff opposition from the Greek public, and Macedonia's president has vowed to block the deal.
"Very few believed we would be able to leave behind 26 years of unfruitful dispute," said Greek Prime Minister Alexis Tsipras, who survived a no-confidence vote mounted by the opposition in parliament on Saturday.
"We have a historic responsibility that this deal is not held in abeyance," Tsipras said as he and his Macedonian counterpart Zoran Zaev received a standing ovation.
In the Macedonian capital Skopje, police fired stun grenades and tear gas on Sunday night to disperse a protest rally by several hundred nationalists.
A Reuters witness saw protesters pelting police with stones, chanting "Macedonia, Macedonia we will give our lives for Macedonia." Some of the demonstrators were arrested.
Across the border, up to 70 percent of Greeks object to the name compromise, an opinion poll by the Proto Thema newspaper showed on Saturday. In Psarades, the tiny lakeside community where the deal was signed, the church bell tolled in mourning, draped in a Greek flag.
Some 30 kilometers away in the Greek village of Pisoderi, about 3,000 people rallied against the deal and at least six were injured in clashes with police who fired tear gas to disperse an angry crowd on a hillside.
"We don't accept anything, we don't recognize anything. For us none of it is valid," said Costas Venetikidis, a protester. "Macedonia is in our soul, that's why we're here."
Not far from the Greek border in the Macedonian city of Bitola, thousands protested draped in national flags, chanting "This is Macedonia."
Top image: Prime ministers of Greece Alexis Tsipras (center right) and of North Macedonia Zoran Zaev (center left) meet before the signing ceremony for the historic agreement between the two countries on the naming dispute, in Prespes, a border lake, on Sunday. (Photo: AFP)