ATHENS, March 25 (Xinhua) -- Greece marked on Monday the 198th anniversary of the beginning of the Greek War of Independence on March 25, 1821 against the 400-year Ottoman rule with a customary military parade in the center of Athens. 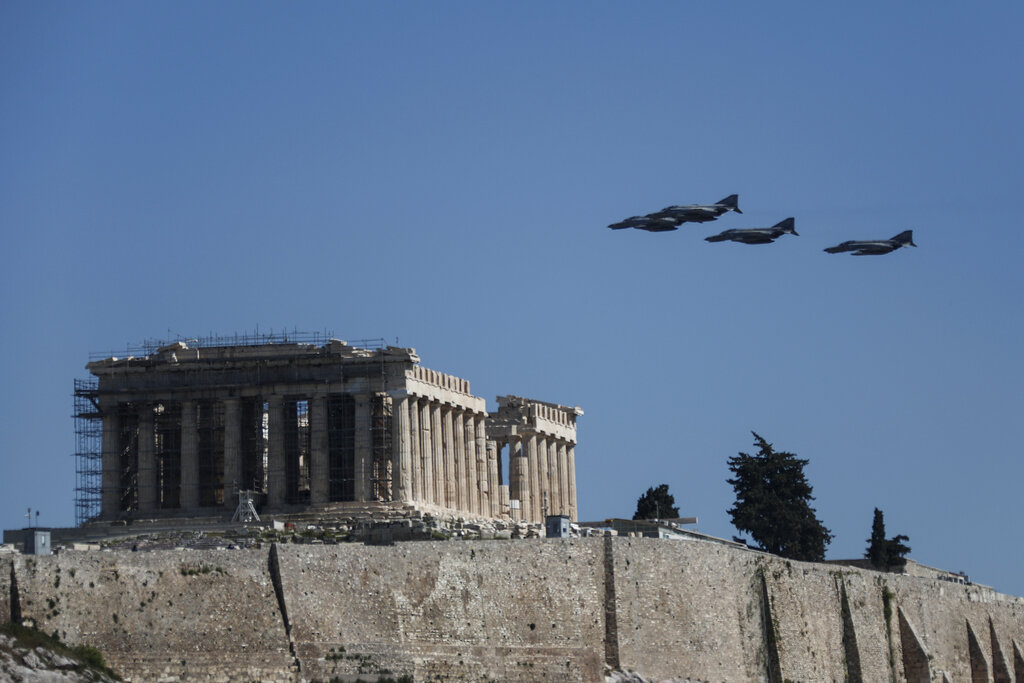 Military aircraft fly over the temple of the Parthenon during a parade in Athens, on Monday March 25, 2019. (Photo: AP)

Soldiers and mechanized units of the Greek Armed Forces paraded in front of the Parliament building, military jets flew and helicopters hovered over the crowd as people were cheering and waving Greek national flags.

In his message for the day, President Prokopis Pavlopoulos, who attended the parade in Athens, urged Greeks to continue defending freedom, friendship and cooperation among nations.

"Our ancestors fought for freedom for every man, because for Greeks freedom is an integral part of human beings. Therefore, today we fight for all peoples' freedom beyond our borders. This is very important concerning our big European family ahead of the upcoming crucial European Parliament elections," Pavlopoulos told the press after the parade, referring to the May ballots.

"We are all aware that forces of populism and racism which border on Nazism openly fight against the European structure, they seek the collapse of European democracy and European civilization. Each European citizen, including Greeks, should give them this message in the elections: You will not succeed," the Greek president stressed.

"We must look back to our history and learn. We are inspired by the heroes of 1821, who gave their blood so that we can live today in a free country," Defense Minister Evangelos Apostolakis said.

Greece's Armed Forces protect the country's territorial sovereignty and support the strengthening of peace and cooperation in the region, the minister underlined.

In addition to the military parade in the center of the Greek capital, thousands of Greek youth participated in student parades nationwide.