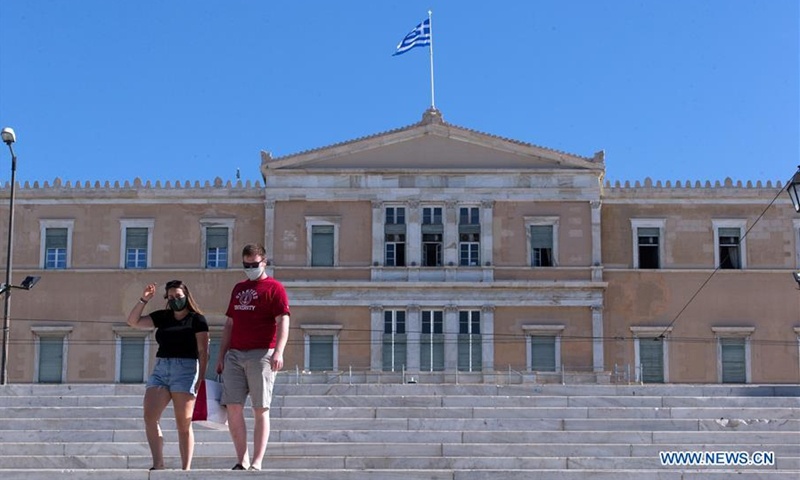 Greece's COVID-19 infections hit the 2,000 cases mark on Saturday, as the government announced tougher restrictive measures to control the further spread of the coronavirus.

The National Public Health Organization announced 2,056 new infections in the past 24 hours which bring the country's total to 39,251 since the first case was diagnosed in Greece on Feb. 26.

It is a new daily record high in the past eight months and the 10th time a new record was being set in October. The previous one was registered a day earlier with 1,690 cases.

Six people have died since Friday, bringing the total fatalities to 626.

Currently 135 patients were treated in ICUs, it was also announced.

Amidst the surge of cases, Greek Prime Minister Kyriakos Mitsotakis earlier on Saturday announced a new set of restrictions that will start on Nov. 3 and will last until December in an effort to avoid a full nationwide lockdown like the one imposed in spring.

The use of protective face masks becomes compulsory indoors and outdoors across the country, while a night curfew from midnight to 5 a.m. which applied only to regions with heavy epidemiological load, is extended nationwide.

All gatherings are suspended, universities will be offering online courses only, while schools will continue to remain open and half of the working force in the public and private sectors will be working from home.

In regions of high alert with heavy epidemiological load, which include Attica, restaurants and cafeterias are closing with the exception of take away and delivery services.

As the world is struggling to contain the pandemic, countries including Germany, France, China, Russia, the United Kingdom and the United States are racing to find a vaccine.

According to the website of the World Health Organization, as of Oct. 29, there were 201 COVID-19 candidate vaccines being developed worldwide, and 45 of them were in clinical trials.