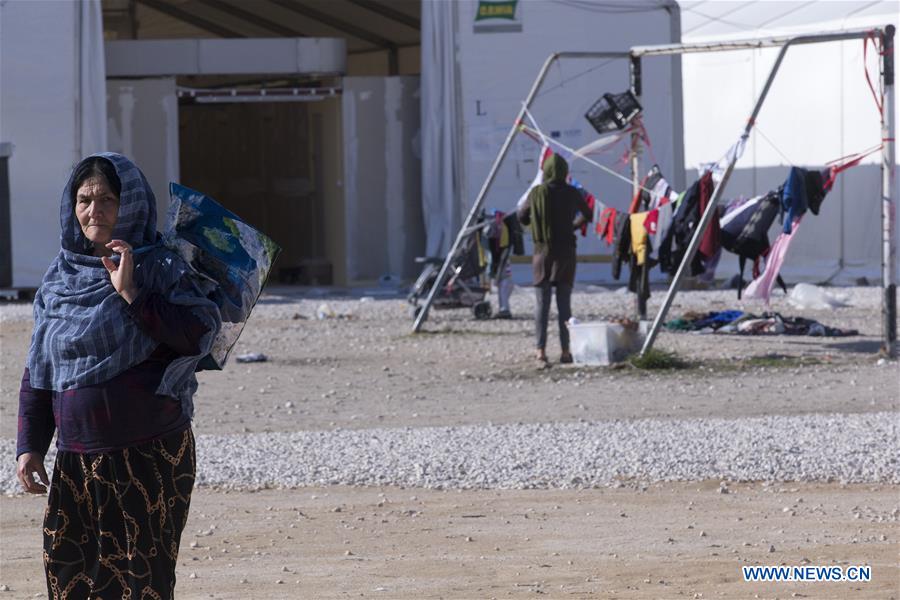 A woman is seen at the Corinth refugee transit camp in Corinth, Greece, on Dec 8, 2019. (Photo: Xinhua)

Greece is predicting 100,000 more migrants will arrive on its shores from Turkey in 2020, as the nation continues to face a crisis coping with an influx of refugees.

Government commissioner for migration, Manos Logothetis, said bursting migrant camps in Greece are already under immense strain, and now the situation was "critical". "The crisis is happening now, and it is serious," he told the German Funke media group on Wednesday.

According to the government, more than 45,000 refugees have arrived in Greece in the past six months and more than 41,000 people are waiting in its three largest migrant camps on its islands near Turkey.

Aid groups have increasingly raised the alarm over what many are calling a humanitarian disaster. Officially, reception facilities on the islands of Samos, Lesbos, Chios, Kos and Leros have a capacity to accommodate just 5,400 people, a Guardian report said.

The number of migrants and refugees crossing from Turkey to Europe rose sharply in comparison with last year, according to a confidential European Union report published by

From January to mid-December, 70,002 migrants reached the EU from Turkey, representing a jump of 46 percent compared with the same period in 2018, Die Welt reported on Tuesday. It said the vast majority are refugees fleeing persecution and war.

The government commissioner said the situation was "clearly more critical" for Greece than the 2015 migrant crisis, when more than one million people crossed from Turkey fleeing the civil war in Syria. He said this is the highest number since the EU-Turkey refugee pact helped stem the flow in 2016.

In 2015, migrants passed through Greece on their way to other EU countries, but now they are largely held at the island reception centers, which are increasingly beyond capacity.

Logothesis announced that the Greek government wants to deport 10,000 asylum-seekers to Turkey, but to do it will need 270 asylum case reviewers.

The decision to deport migrants comes after Greece elected the New Democracy party, which adopted a more hardline approach to migrant arrivals, focusing on deportation and faster decisions over asylum applications.

Last month, the Greek government announced plans to build new arrival centers on each of the five islands where most migrants arrive after crossing the Aegean Sea. Aid groups criticized the plans to create "prison" island camps, which would be closed installations replacing the vastly overcrowded, open-air camps.

Prime Minister Kyriakos Mitsotakis conceded that pressure on Greece to patrol its eastern frontiers had risen dramatically in the wake of Europe's decision to seal off the nation's northern borders against migrant flows.

"The country needs a national strategy," he said, vowing that the era of notorious island camps would finally be replaced "by images of modern, properly functioning installations".