THESSALONIKI, Greece, Nov. 14 (Xinhua) -- Greece will close for two weeks all primary schools and kindergartens across the country as of Nov. 16 as part of the efforts to curb the spread of the novel coronavirus, Minister of Education and Religious Affairs Niki Kerameus announced on Saturday. 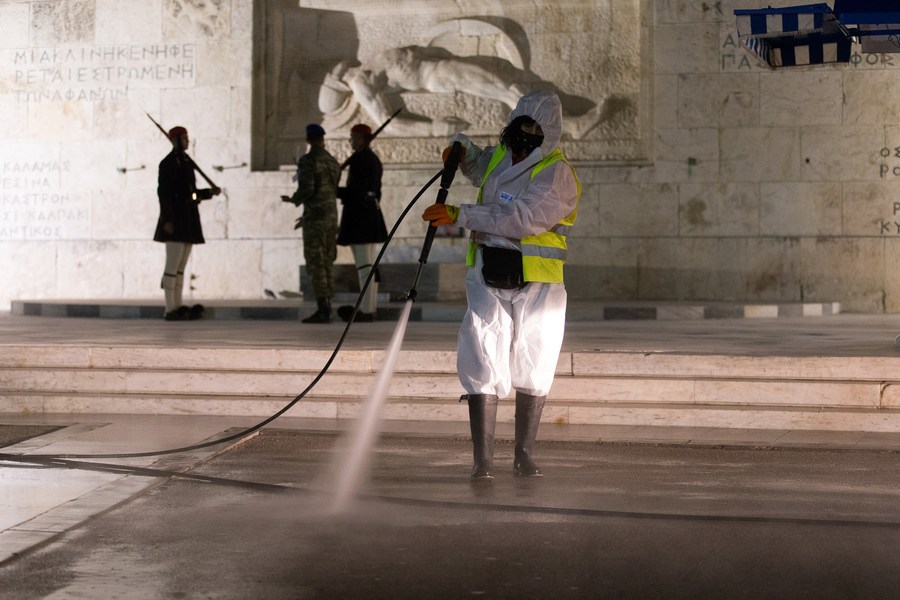 An employee of the Municipality of Athens sprays disinfectant at the Tomb of the Unknown Soldier in Athens, Greece, on Nov. 13, 2020. (Xinhua/Marios Lolos)

Lessons will be offered through tele-education platforms, as in the case of middle schools, high schools and universities which closed a few days earlier. Only schools for disabled children are exempted.

The measure is deemed necessary to further limit movements by parents, the minister stressed during a press briefing broadcast on national television ERT.

"Due to the recent development of the pandemic, these measures are necessary so that we can face decisively all together -- each one of us with personal sacrifices -- the spread of the coronavirus in the country. Our goal is to soon return to the classrooms of our schools and the company of our loved ones," Kerameus said.

The new measure comes as Greece has already been placed in a full nationwide lockdown -- the second this year -- since Nov. 7 until Nov. 30, and an additional night curfew started on Friday evening throughout the country.

Greek authorities reported on Saturday 2,835 new cases of COVID-19 along with 38 deaths, bringing the country's total confirmed cases to 72,510, while the toll from the coronavirus has topped 1,000.

In recent weeks, Thessaloniki region has led in the daily new cases in the country and local officials are warning against complacency and urging for strict observance of protection measures.

On Friday night, the center of Thessaloniki city port in northern Greece resembled a ghost city, with only a few cars and pedestrians on the streets, while police officers stopped people to check whether their movements were justified.

Similar images flooded social media on Saturday from all over Greece.

Seventy-two percent of people in Greece deemed the second lockdown necessary after the daily records of cases, deaths and the intubated have been broken over a dozen times since early October, according to an opinion poll conducted by Alco polling firm on Nov. 6-11 for local tv channel OPEN.

At the same time, 65 percent of respondents felt the tougher measures were announced with delay, and 52 percent said they were not happy with the government's response this time around compared with the reaction during the first wave of the pandemic in spring.

As the world is struggling to contain the pandemic, countries including France, Germany, China, Russia, the United Kingdom and the United States are racing to find a vaccine.

According to the website of the World Health Organization, as of Nov. 12, there were 212 COVID-19 candidate vaccines being developed worldwide, and 48 of them were in clinical trials. (1 euro= 1.18 U.S. dollars)