ATHENS, April 2 (Xinhua) -- Greece will continue to administer AstraZeneca's COVID-19 vaccine despite the decision by some other European Union (EU) countries to suspend its use for certain age groups, Greek officials said on Friday. 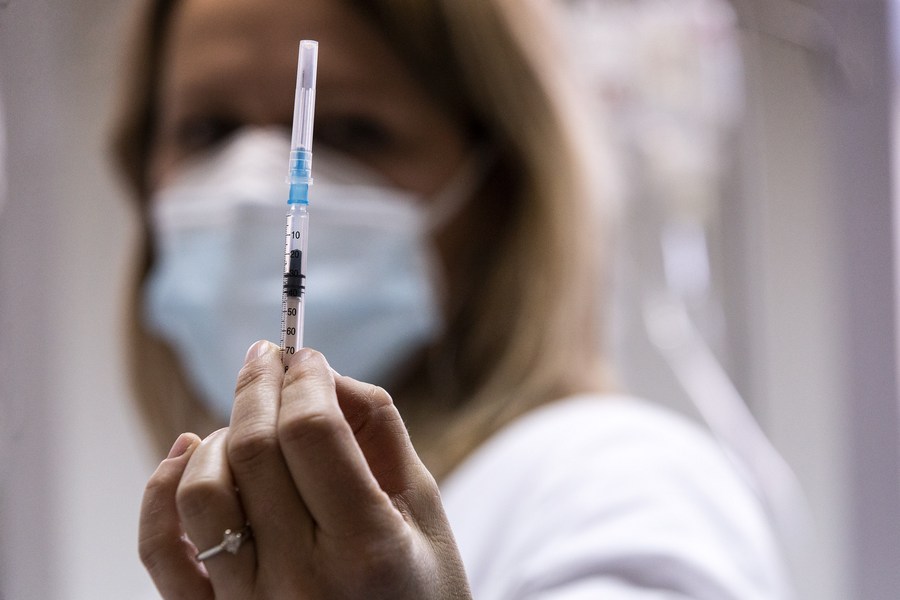 "We will stay on course as scheduled," Vana Papaevangelou, associate professor of pediatrics and member of the committee of experts advising the Greek Health Ministry on the management of the COVID-19 crisis, told a regular press briefing carried by national broadcaster ERT.

Following reports of blood clots and deaths after use of the AstraZeneca shot, for the second time this spring some European countries have suspended the use of the vaccine for people younger than 60.

Greece administers three vaccines free of charge and on a voluntary basis. To date, more than 1.7 million vaccine doses have been administered in the country. Over 600,000 people have received both doses, according to the latest official figures released on Thursday.

Greek officials said that the country expects to administer around three million vaccine doses by June. Greece counts on the delivery of more doses in the coming weeks and is working to increase the number of vaccination centers.

Two huge vaccination centers designed to welcome thousands of people per day opened this week at the old airport of Athens by the seaside and in the western suburb of Peristeri, one the most populous districts of the Greek capital.

Meanwhile, 269 candidate vaccines are still being developed worldwide -- 85 of them in clinical trials -- in countries including Germany, China, Russia, Britain, and the United States, according to information released by the World Health Organization on Friday.

Greece registered 3,080 new coronavirus infections and 72 deaths in the past 24 hours, the National Public Health Organization (EODY) reported on Friday. A total of 270,230 infections and 8,232 deaths have been confirmed since the start of the pandemic in the country 13 months ago. On Friday, 753 patients were on ventilators in hospitals across the country.

Greece has been in a nationwide lockdown since Nov. 7, 2020. Despite the persistently high number of new cases, hospitalizations and fatalities, the country's officials decided to ease some restrictions starting this weekend to give people a breathing space after a very difficult winter, they told Friday's press briefing.

As of Saturday and on weekends only, citizens will be allowed to move between municipalities to exercise and as of Monday retail trade will reopen again under restrictions.