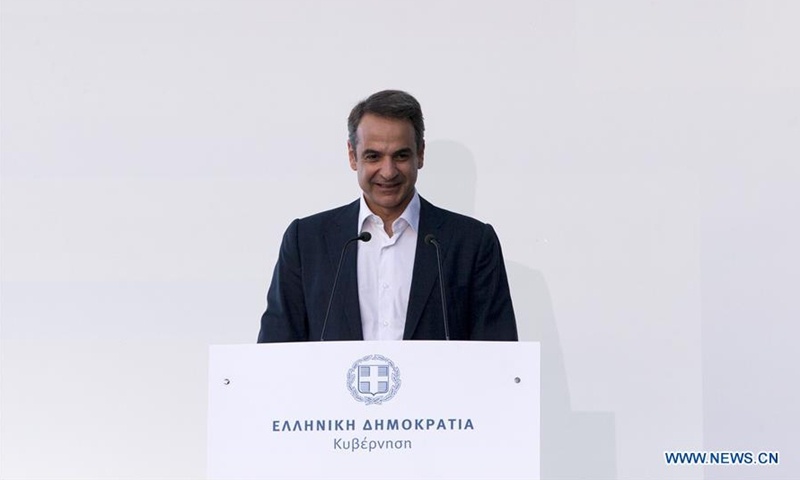 Greek Prime Minister Kyriakos Mitsotakis delivers a speech at an event on public health in Athens, Greece, on July 1, 2020. Greek Prime Minister Kyriakos Mitsotakis expressed the government's gratitude on Wednesday to donors for their continuing support to the National Health System in the war against COVID-19, at an event here on the occasion of a new donation made by Stavros Niarchos Foundation (SNF). (Photo: Xinhua)

Diplomats from NATO members Greece and Turkey failed to reach a breakthrough on Tuesday during a latest round of talks on their standoff over eastern Mediterranean borders and energy rights.

Greek Foreign Minister Nikos Dendias told reporters afterwards that his country was "participating in these talks in good faith."

But the two sides seemed far apart both on the scope and details of the talks.

Turkish President Recep Tayyip Erdogan said afterward it was "out of the question for us to make any concessions."

Tuesday's talks were the second meeting in 2021 after the two sides met in Istanbul in January, ending a nearly five-year pause in the dialogue - and taking place only after European Union pressure.

Another meeting is scheduled in Istanbul, Greek state broadcaster ERT reported. But more than 60 such meetings since 2000 have yielded scant progress.

The latest talks did not start in the best of conditions, after a diplomatic note from Ankara a day earlier drew a line in the sand.

The note was addressed to Israel, Greece and the European Union, Turkish media reported, telling them to seek Ankara's permission before proceeding with work on a proposed undersea power cable in disputed eastern Mediterranean waters.