Greece's migration ministry on Wednesday announced new restrictions to the movement of asylum-seekers in island camps to keep out the new coronavirus, and accelerated work on new closed facilities. 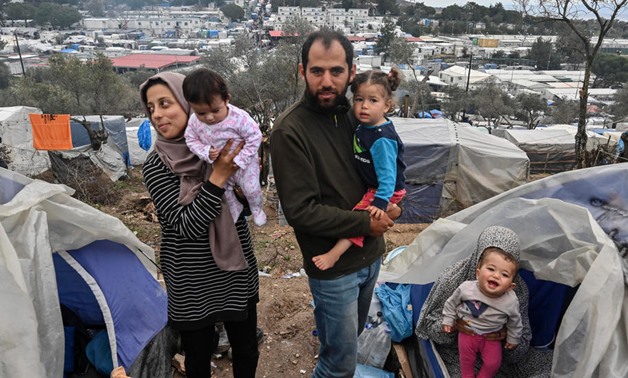 The Moria camp on the island of Lesbos is overcrowded (File photo: AFP)

"As of today, the movement of island camp residents will be drastically reduced," Migration Minister Notis Mitarachi said in a statement.

The ministry said that for the next 30 days, the movement of camp residents to nearby communities would be restricted to "small groups" between 7am and 7pm.

"These groups can only include one person per family," the ministry said, adding that the movements would be on "controlled" public transport and regulated by police.

"Wherever possible, supply will be conducted via phone order," the ministry said.

Specialised medical teams were being deployed to the camps and virus isolation areas would be created, authorities said.

On Tuesday, Greek authorities said camp access to outside visitors would be barred for two weeks, excepting only authorised staff.

"Visits (to camps) by individuals and organisations are suspended for at least 14 days," the migration ministry said.

"Entry will be allowed only to staff and there will be a compulsory temperature check for new arrivals," it said.

Greece has progressively tightened restrictions on trade and public gatherings, with the national death toll from the virus now at five with 387 cases.

There are tens of thousands of asylum seekers in camps on the Greek mainland and islands near Turkey, and most of them are badly overcrowded.

Hundreds more arrived this month after Turkey announced it would no longer stop people from attempting to reach the EU -- going against a deal reached with the bloc in 2016 -- leading to days of chaos at the Greek border.

The ministry on Wednesday said no new arrivals after March 1 would be allowed in existing camps as a health precaution.

In a statement to mark four years since the deal on Tuesday, the Greek Council for Refugees and Oxfam said "suffering has reached unimaginable levels".

The Greek migration ministry recently opened two camps on the mainland for hundreds of new arrivals on the islands from Turkey.

On Wednesday, the ministry said efforts to build new closed camp facilities on the islands would redouble.

Migration minister Notis Mitarachi said construction of a new camp on the island of Samos would "accelerate".

And work to expand smaller camps on the islands of Kos and Leros would begin "immediately", the ministry said.

The ministry did not mention the islands of Lesbos and Chios, where an attempt last month to begin work on new camps resulted in days of clashes with locals.