Orange flames engulfed pine forests, turning them to ash and leaving lines of charred cars in the smoke-filled streets of seaside towns near Athens. 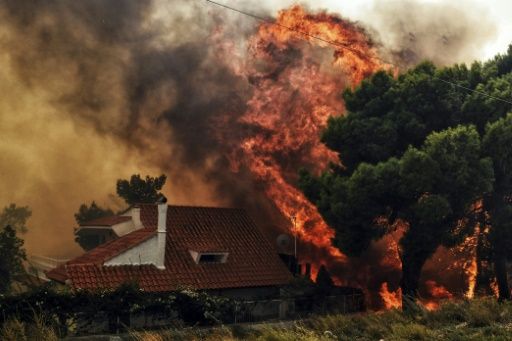 Rescuers rushed to evacuate residents and tourists stranded on beaches after some were caught by the flames in their cars or on foot.

"I saw the fire move down the hill at around 6:00 pm and five or ten minutes later it was in my garden," said 60-year old Athanasia Oktapodi.

His home is surround by dry pine trees.

"They caught fire. I ran out like a crazy person, got to the beach and put my head in the water. Then the patrol boats came."

The toll soared to 50 after the bodies of 26 people, including small children, were discovered in the courtyard of a villa at the seaside resort of Mati, 40 kilometres (25 miles) northeast of the capital. 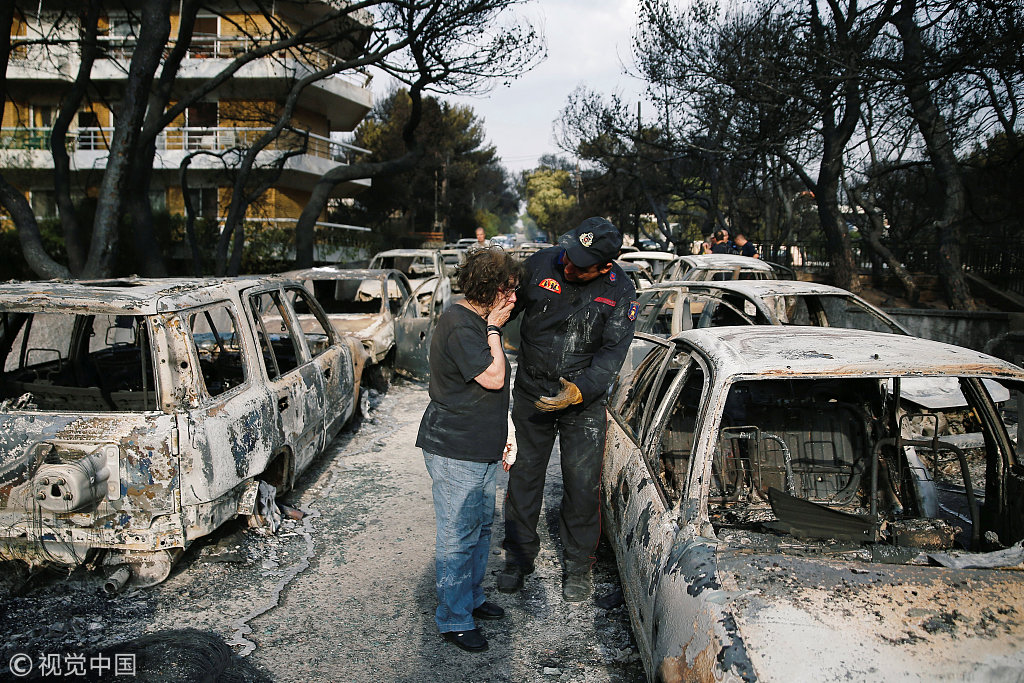 A woman reacts as she tries to find her dog, following a wildfire at the village of Mati, near Athens, Greece July 24, 2018. (Photo: VCG)

Local councillor Myron Tsagarakis in Rafina, the largest town in the area most affected by the fires, later told AFP that 60 had been counted dead overall.

He said the toll could continue to rise since more people were thought to have been trapped in their homes by the blaze.

The charred bodies in Mati were entwined in groups in "a final attempt to protect themselves", said rescuer Vassilis Andriopoulos.

Winds of more than 100 kilometres per hour (60 mph) in Mati caused a "sudden progression of fire" through the village, said fire brigade spokeswoman Stavroula Maliri.

"Mati no longer exists," said the mayor of nearby Rafina, Evangelos Bournous. He added that more than a thousand buildings and 300 cars had been damaged.

The government said at least 172 people were hurt, including 16 children, with 11 adults in a serious condition.

Officials said they were Greece's deadliest blazes in more than a decade.

Some of the survivors spent hours choking on clouds of ash at the edge of the water as they waited for help.

At least five people died trying to escape the flames into the sea. Some 715 people were evacuated by boats to Rafina, the government said.

"People are shocked, lost. Some of them have lost everything: children, parents, homes," said Red Cross spokeswoman Georgia Trisbioti.

Firefighters said the fire had stopped spreading around Mati but another blaze was raging in the beach town of Kineta, 50 kilometres west of the capital.

European Commission chief Jean-Claude Juncker tweeted Tuesday that the EU "will spare no effort to help Greece and the Greek people".

Tsipras said "all emergency forces" have been mobilised to battle the fires.

Near the town of Marathon, residents fled to safety along the beach, while 600 children were evacuated from holiday camps in the area.

Officials raised the possibility they could have been started deliberately by criminals out to ransack abandoned homes.

"I am really concerned by the parallel outbreak of these fires," Tsipras said.

Supreme court prosecutors announced they had opened an investigation into the causes of the fire.

Fires are a common problem in Greece during the summer. Blazes in 2007 on the southern island of Evia claimed 77 lives.

After temperatures climbed to 40 degrees Celsius (104 degrees Fahrenheit), forecasters said conditions would remain challenging on Tuesday, although showers and falling temperatures were expected in Athens.

Sweden is experiencing an unprecedented drought and the highest temperatures in a century. It has counted more than 20 fires across the country.

In Finland's northernmost Lapland province -- which calls itself the "official home" of Santa Claus -- fires have ravaged woods and grassland close to the border with Russia.