Hundreds of firefighters were battling to control two massive wildfires in Greece on Wednesday, one raging for nine straight days that have left hundreds homeless and caused incalculable damage. 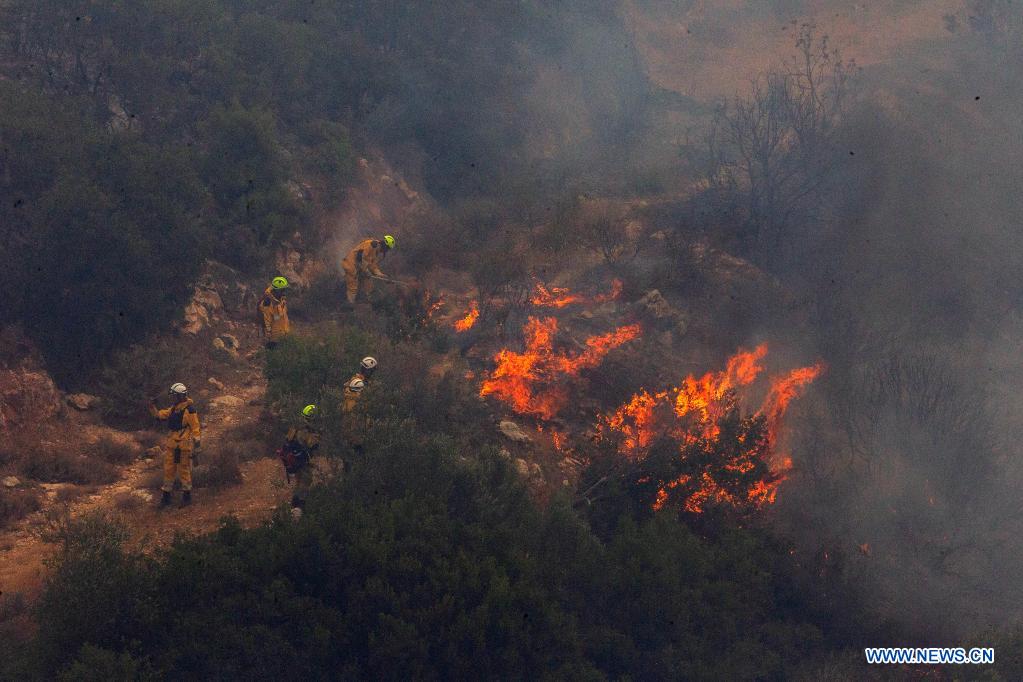 Firefighters try to put out a fire in Afidnes, some 30 kilometers away from the Greek capital of Athens, on Aug. 6, 2021. (Photo: Xinhua)

With the assistance of a huge multinational force, Greek fire crews were fighting to beat back blazes on the island of Evia and in the Peloponnese peninsula in rugged terrain.

"I think we can say that the fire fronts are slowly coming under control," Yiannis Kontzias, mayor of the Evia town of Istiaia that has been under threat for days, told state TV ERT.

"Yesterday, we saw the light of the sun for the first time in days," he said, referring to giant smoke clouds that have choked residents and obstructed water drops by firefighting aircraft.

The situation was more precarious in the mountainous Peloponnese region of Gortynia, home to thick forests and deep ravines. Christos Lambropoulos, deputy governor for the broader Arcadia region, said efforts were concentrated on keeping the fire from reaching the thickly forested Mount Mainalo.

"Villages do not seem at risk at the moment... but conditions change by the hour," he told ERT.

Three people have died in the latest fire wave, which came in the midst of Greece's most severe heat wave in decades. Many here admit that help from abroad has been critical in averting an even greater disaster.

EU states and other countries have so far contributed 21 aircraft, 250 vehicles and more than 1,200 firefighters, some of whom were due to arrive by Friday.

There have been growing calls in Greece for the resignation of top public safety officials who as recently as June had insisted that the country was well-prepared.

"[Our resources were] stronger than ever before. We faced an operationally unique situation with 586 fires in eight days during the worst weather phenomenon in 40 years," civil protection deputy minister Nikos Hardalias insisted on Tuesday.

Greek Prime Minister Kyriakos Mitsotakis this week apologized to the nation for any possible "shortcomings" in the state's response.