By Jonathan Powell in London | chinadaily.com.cn 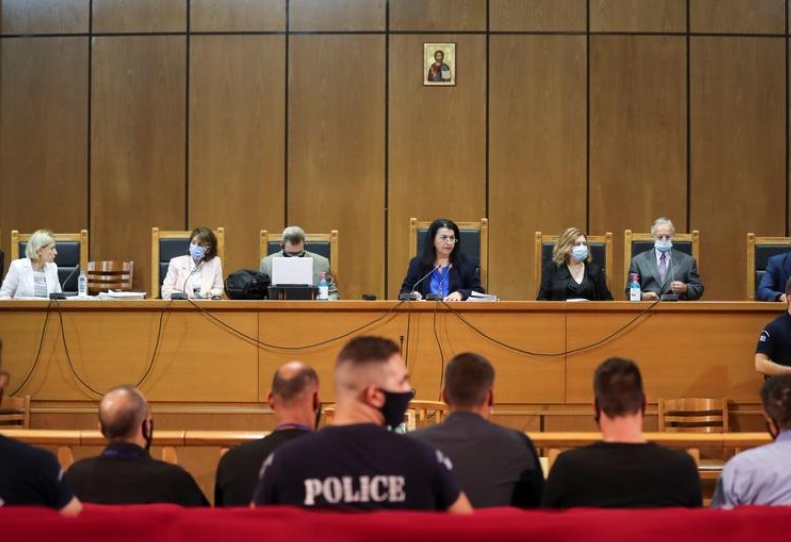 Presiding judge Maria Lepenioti attends a trial of leaders and members of the Golden Dawn far-right party in a court in Athens, Greece, October 7, 2020. [Photo/Agencies]

The leadership of Greece's neo-Nazi party Golden Dawn has been convicted of running a criminal organization, after a trial lasting more than five years.

The landmark verdict, against 68 leaders and members of the party, was met with applause from more than 15,000 people gathered for an anti-fascist rally outside the court, where hundreds of police were deployed.

The court assessed four cases: the fatal stabbing of anti-fascist campaigner and hip-hop artist Pavlos Fyssas, attacks on migrant fishermen, attacks on left-wing activists and whether Golden Dawn was operating as a criminal organization.

The neo-Nazi populist political party had members within the Greek Parliament from 2012, when Greece was battered by a financial crisis, until July 2019, when Golden Dawn failed to receive 3 percent of the vote as required in the general election.

The case, regarded as one of the most important in the country's modern political history, began after a series of delays in April 2015, after the September 2013 murder of Fyssas, in the port of Piraeus.

Giorgos Roupakias, a self-confessed member of Golden Dawn, was charged with the brutal murder.

It was alleged by Greek prosecutors that the Golden Dawn members "ordered or at the very least were aware" of the murder of Fyssas.

Agencies reported that the Golden Dawn defendants in the trial were also convicted of other violent attacks on migrants and left-wing political opponents.

The key verdict was that Golden Dawn was a criminal group and leader Nikos Michaloliakos and six colleagues were convicted of heading it.

Roupakias was found guilty of murdering the musician Fyssas and 15 others were convicted of conspiracy in the case.

Reuters news agency noted that this was the first time that elected politicians had been jailed in Greece since a military coup in 1967.

The Agence France Presse news agency reported that police outside the court used tear gas and a water cannon to disperse fringe protesters who threw firebombs at them.

One Athens resident and protester, Sophia, 50, told the Al Jazeera news network why the case was so significant.

"All over the world I think it's very important to show resistance and demand the biggest punishment for all these years," she said. "Many people fight against fascists and racism so we must be here to support (them) but also support immigrants and all people who have been threatened by Nazis and government politics."