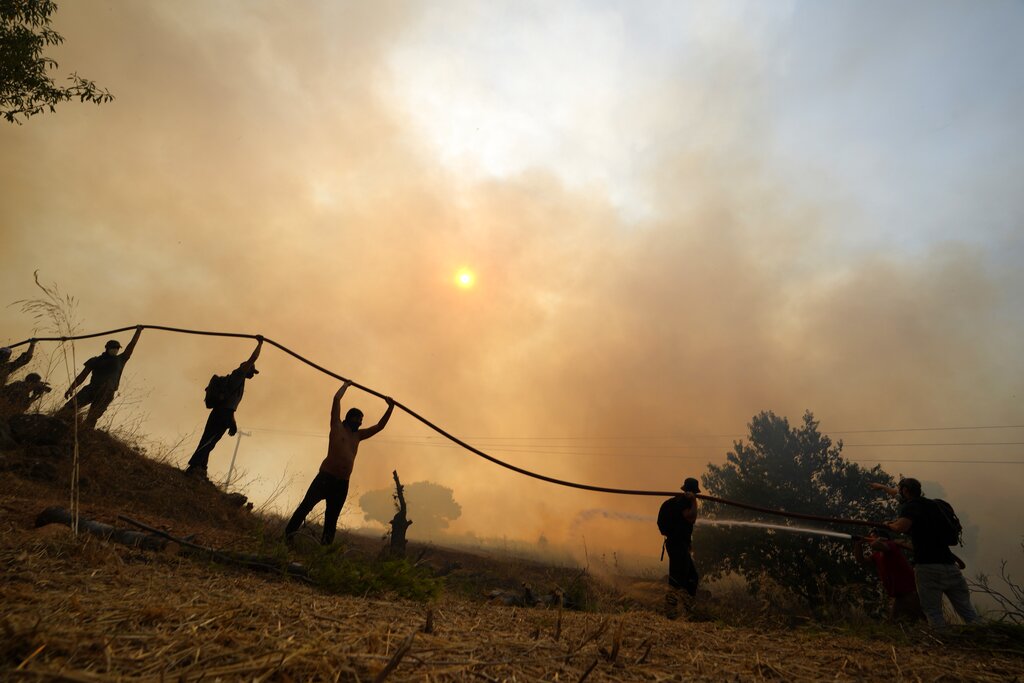 A firefighter tries to extinguish a fire as volunteers hold the water hose during a wildfire in Agios Stefanos, in northern Athens, Greece, Friday, Aug 6, 2021. (Photo: AP)

Greece's economy will weather the twin blows of the Covid-19 pandemic and massive wildfires this year, aided by better-than-expected tourism arrivals, the finance minister said Friday.

"Our estimate for 3.6-percent (economic) growth this year is absolutely feasible, and may actually be too conservative," he said.

Greece had expected to recover only 45 percent of the pre-pandemic levels of revenue from 2019, but arrivals are currently at 70 percent, Staikouras said.

Greece reopened to foreign travellers in May after a sustained campaign to vaccinate residents in islands and other tourism destinations.

Tourism is crucial to the Greek economy, as it accounts for 20 percent of GDP.

The results have been mostly positive, with virus spikes limited in scope.

The popular island of Mykonos went into curfew in July after a flurry of cases. Similar restrictions were imposed in Zakynthos and in two cities in Crete in recent days.

Greece has spent billions of euros propping up businesses during lockdowns since 2020, and additional spending will be required to sustain residents in areas devastated by wildfires over the past three weeks.

Hundreds of homes and many businesses have been destroyed in Evia, Arcadia and the outskirts of Athens in the prolonged fire wave that struck Greece from late July and intensified last week, during the worst heatwave in decades.

Staikouras said the government would disburse an additional 500 million euros ($586 million) this year in the wake of the fire disaster.