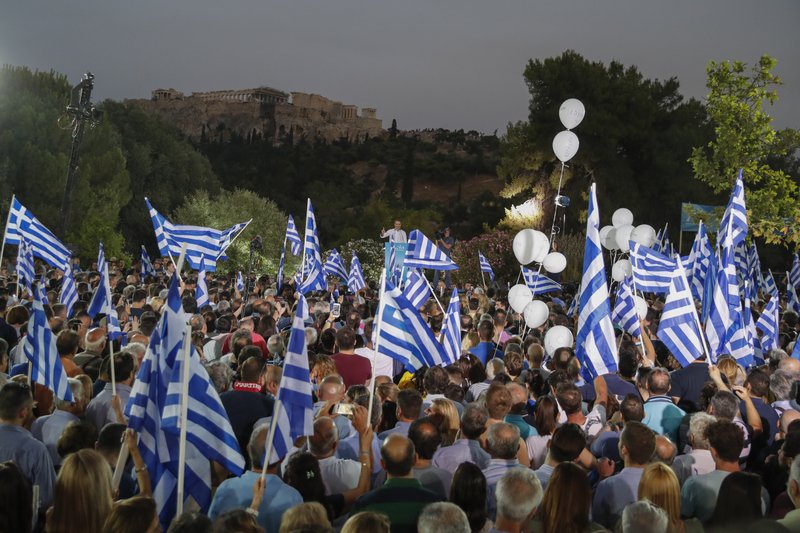 Greek voters appear set to defy a surge of support populist parties across Europe in a general election Sunday, with the pro-EU center-right opposition firmly in the lead.

Left-wing Prime Minister Alexis Tsipras called the snap poll after being trounced in May’s European parliamentary elections and several months after his coalition with a nationalist partner collapsed. It followed a grueling four years in office for Tsipras, largely defined by economic hardship and a slow recovery after Greece limped out of an international bailout.

The government’s main rival, Kyriakos Mitsotakis’ conservative New Democracy, won the European election by nearly 10 percentage points and opinion polls suggest he has held onto the lead in the seven weeks since.

But the end of the bailout era last August has marked a gradual return to traditional politics — in contrast to a large number of European Union members where mainstream parties are under pressure.

Tsipras’ once radical left-wing party, Syriza, has recently aligned itself with policies of the European Socialists.

“Greece was the country that brought about the first genuinely populist coalition, the one of Syriza and (nationalist) Independent Greeks back in 2015, and it is probably the first one that is abandoning this populist coalition and populist politics even though this government has shifted to ... relatively more mainstream policies,” says George Pagoulatos, professor of European Politics and Economy at the Athens University of Economics and Business.

“And in that sense it is a moment of political maturity of Greek society especially if compared with other societies in Europe that have gone through far less painful experiences compared to the Greek Great Depression.”

Sunday’s elections come at the tail end of the crippling financial crisis that began in 2010 and left the country dependent on international rescue loans for survival. But the bailouts — three in total — came with strings attached: Austerity measures and reforms. The country’s economy shrank by a quarter, and unemployment spiraled to highs of around 27%, from where it has struggled to fall to current levels of around 20%.

Now, for the first time in nearly a decade, Greeks head to the polls without the threat of imminent default, crashing out of Europe’s joint currency, the euro, or yet more crushing bailout measures dangling over their heads.

Despite a recent spending spree on social handouts, Tsipras is struggling to recover lost ground, with opinion polls putting New Democracy’s Mitsotakis firmly in the lead and suggesting that the conservatives are attracting undecided voters at nearly twice the rate of Syriza in the final week of campaigning.

The 51-year-old Mistotakis, son of the late conservative prime minister Constantine Mitsotakis, has run on a campaign promise to slash bailout-era taxes and building on business-friendly reforms imposed by creditors.

“Mr. Tsipras decided to overtax the middle class. So there is this clear room to scale back from this excessive taxation. Everyone seems to agree that we have to lower taxation including our creditors,” Mitsotakis told The Associated Press in a campaign stop in central Greece.

Encouraging his supporters to ignore opinion polls, Tsipras has campaigned on a pledge to continue repairing the welfare state and the national health service — an effort, he argues, that would be halted by his opponents.

“The crown princes (of Greek politics) should not be in such a rush to return to the throne — the Greek people have not said their final word,” Tsipras, a veteran of Greek politics at just 44, told supporters at a rally this week in southern Greece. “You are being told that race is over, but our people will never return to those who looted and bankrupted the country.”

The government’s popularity was also hit by its perceived mishandling of a deadly summer wildfire last year in Mati, on the outskirts of Athens that killed 101 people.

His support was also dented by a landmark agreement that took effect this year with neighboring North Macedonia, which formally changed its name from Macedonia to end a decades-long dispute with Athens. Greece has long argued use of the term implies territorial ambitions on its own northern province of the same name.

The deal was warmly welcomed by Greece’s NATO allies but remains unpopular domestically.

Ultimately, however, voters are swayed by their personal finances and the impact of Greece’s draconian bailout commitment, argues politics and economy professor Pagoulatos.

“The policies (Tsipras) had to apply were not policies that most of its supporters would have supported under normal conditions,” he said. “The high tax burden on the middle class has been one of the main reasons why Syriza has lost much of its support.”