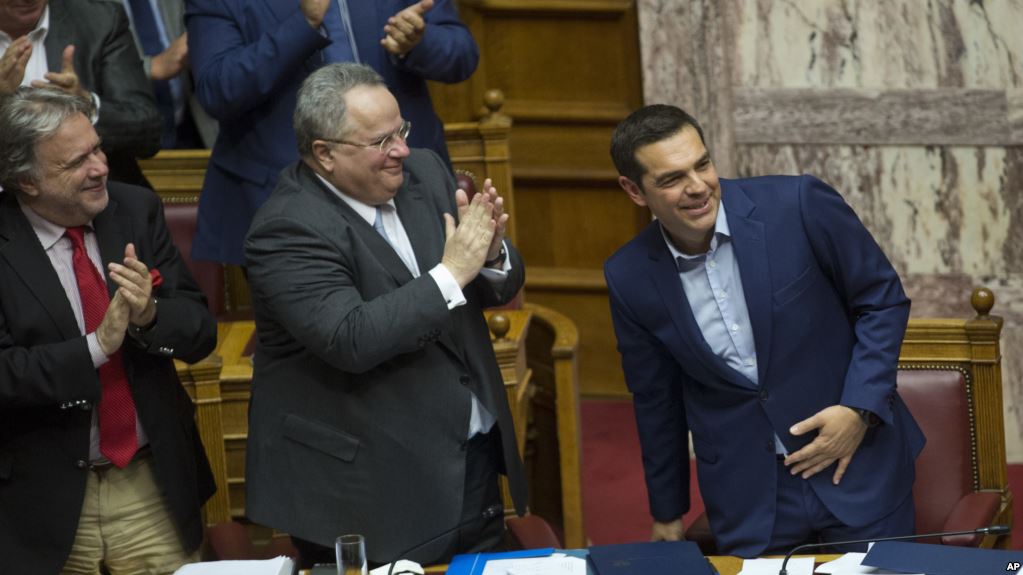 Greek Prime Minister Alexis Tsipras, right, is applauded by lawmakers after the end of his speech during a parliamentary session, in Athens, June 16, 2018. (Photo: AP)

Greece's government survived on Saturday a no confidence motion tabled by main opposition party New Democracy over the historic Macedonia name deal reached earlier this week between Athens and Skopje which will be signed on Sunday at the Prespes lakes on the border between the two neighboring states.

A total of 127 MPs voted in favor of the motion, while 153 deputies voted against, with 280 lawmakers participating in the roll call vote, Greek national news agency AMNA reported.

Among the deputies who voted in favor of the motion was Dimitris Kammenos who was immediately expelled from the parliamentary group of the Independent Greeks (ANEL), the junior partner in the two-party ruling coalition.

Addressing the plenary shortly before the vote Greek Prime Minister Alexis Tsipras defended the agreement his government struck with Skopje on Tuesday as a best compromise to a long lasting dispute after marathon UN-mediated negotiations.

Main opposition party President Kyriakos Mitsotakis and other opposition parties voiced objections to the agreement which in coming months should also be ratified by the two parliaments. Former Yugoslav Republic of Macedonia (FYROM) Prime Minister Zoran Zaev has also called a referendum on the agreement.

The two premiers will attend on Sunday the signing of the deal by the two countries' foreign ministers, Nikos Kotzias and Nicola Dimitrov.

Under the terms of the agreement the two governments have reached, the northern neighbor of Greece will be renamed "Republic of North Macedonia" in exchange for Greece dropping its objection to the country's admission to NATO and the European Union.

Athens and Skopje are at odds over the use of the name of Macedonia since the neighboring state declared independence from Yugoslavia in 1991.

Macedonia is also the name of a northern province in Greece and Athens is worried that the use of the same name could lead to territorial claims.

Despite the two government's determination to settle the name dispute, hardliners in both sides vow to block the implementation of the deal.

As Greek MPs were debating and voting on the motion on Saturday, a few hundred of protesters held a rally outside the parliament building in the center of the Greek capital. Waving Greek flags despite the rain here, they expressed their opposition to the signing ceremony of the name agreement.

Some of them attempted to ascend to the courtyard of the parliament and riot police used tear gas to hold back the crowd. Three people suffered minor injuries; two of them respiratory problems and one was hit in the head, according to AMNA.