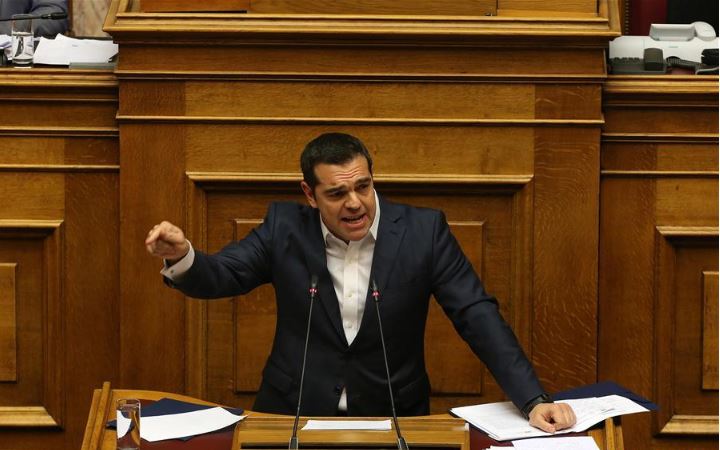 ATHENS, Jan. 16 (Xinhua) -- The government of Greek Prime Minister Alexis Tsipras won a confidence vote in the Greek parliament on Wednesday, while a new crucial vote for the ratification of the Macedonia name deal will follow it in the coming days.

A total of 151 lawmakers voted to back the government, while 148 voted against and one was absent during the roll call voting in the 300-member strong assembly, which was broadcast live on Greek national broadcaster ERT.

The vote was called by Tsipras on Sunday after the withdrawal of the junior partner in the ruling coalition due to its opposition to the Macedonia name agreement clinched last year to resolve the long-standing name dispute with the neighboring Former Yugoslav Republic of Macedonia (FYROM).

In addition to the 145 deputies the Radical Left SYRIZA ruling party has in the plenary, 6 MPs who were either independent or belonging to the Independent Greeks (ANEL), the right-wing party which co-ruled the country since 2015, cast a vote of confidence to the minority government.

"The government today requests confidence vote, which I repeat, is also a confidence vote to stability and the country's credibility," Tsipras said, delivering a speech shortly before the vote.

A total of 13 governments across Europe today are minority governments he added in response to the call of the opposition to step down and declare early elections.

"Even if you secure today the confidence vote of 151 lawmakers, your parliamentary group will still be numbering only 145 MPs. You are de facto a minority government... Elections are the only way to see the country moving forward," Kyriakos Mitsotakis, leader of the conservative main opposition New Democracy party said, addressing the assembly.

The government's instability will harm Greece's efforts to restore growth after exiting the bailout period last summer after eight years, he argued.

On his part, after the conclusion of the voting on Wednesday Tsipras reiterated his determination to continue his work until the end of his term in office in autumn 2019.

The next critical test for his government was expected later this month. Although no exact date had been yet announced, the PM has said that he intends to bring the Macedonia name agreement for approval by the parliament by February.