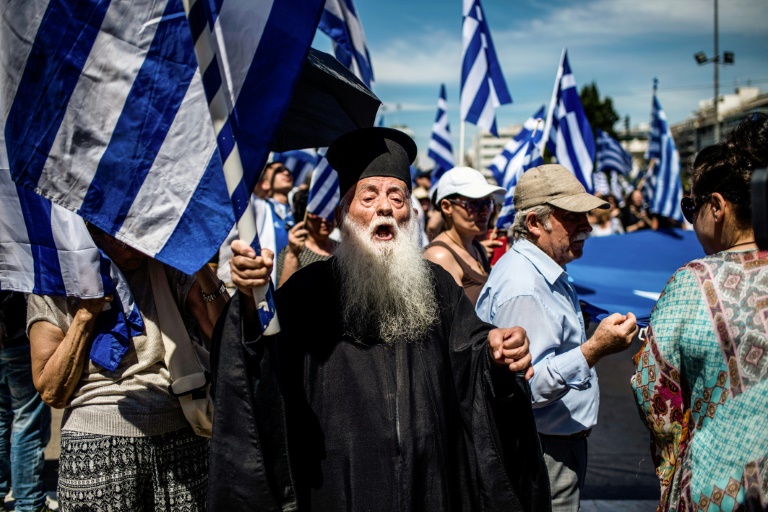 A Greek Orthodox priest takes part in a demonstration in Athens on June 15 against the agreement reached to resolve a 27-year name row with Macedonia.(Photo: AFP)

Greece's leftist-led government was expected Saturday to shrug off a censure vote and protests as it prepares to sign a landmark preliminary deal to end a 27-year name row with Macedonia.

The parliamentary vote was set to take place in the evening, hours before the foreign ministers of Greece and Macedonia meet on the border Sunday.

"We do not trust this government... Your administration is incompetent and dangerous," said socialist party leader Fofi Gennimata.

"This deal needs to be improved before it is too late," she said.

A few hundred people gathered outside the parliament in Athens to protest the deal, which will eventually see Greece's northern neighbour renamed the Republic of North Macedonia.

Athens had long objected to its neighbour being called Macedonia because it has its own northern province of the same name, which in ancient times was the cradle of Alexander the Great's empire -- a source of intense pride to modern-day Greeks.

But earlier this week, the leaders of both countries reached a deal to end the dispute, which dates from Macedonia's declaration of independence in 1991.

However, opposition hardliners say the accord amounts to "high treason".

The crowd outside parliament waved national flags, some of them bearing the face of Alexander the Great.

"Thousands shed their blood and thousands of innocent civilians were butchered over the name of Macedonia," conservative MP Yiorgos Kasapidis told parliament.

"If this is not treason, what is?" he wondered.

The provisional accord is to be signed in the fishing village of Psarades on the Prespes Lakes, with Prime Ministers Alexis Tsipras and Zoran Zaev in attendance.

Longterm UN envoy Matthew Nimetz and senior EU officials will also be present, according to Greek reports, while protesters from both sides will gather nearby.

The agreement has been welcomed by the United Nations, the European Union and NATO.

Tsipras has called it "a victory of historic importance for Greece."

"We proved that where there is a will, a decades-old dispute can be resolved in a balanced way," he said Friday.

Greece has its own northern province called Macedonia, which in ancient times was the cradle of Alexander the Great's empire

The Macedonian parliament should start debating the agreement next week.

Officials in Athens says the deal will help stabilise the historically volatile Balkan region, permitting Greece to focus on other regional challenges, Turkey among them.

But from the moment the details emerged, a political storm erupted in both countries.

Skopje hopes to secure a date to begin EU accession talks at a summit in late June and an invitation to join NATO in mid-July.

In Athens, there is anger over the government's acceptance that its neighbour will be able to refer to its language and ethnicity as "Macedonian".

And to Macedonians, who have espoused this identity since the days of Yugoslavia's Marshal Tito, the notion of revising their name and constitution is anathema.

On the Macedonian side of the Prespes Lakes, deal opponents on Saturday sang "We have only one name", a patriotic song popular in the early 1990s.

"This is an absolute defeat of the Macedonian diplomacy in every possible way," Hristijan Mickovski, who heads the main opposition VMRO-DPMNE party, said this week.

"There is no chance that those speaking a 'Macedonian' language will be called 'North Macedonians'," said New Democracy leader Kyriakos Mitsotakis.

"We will not divide the Greeks in order to unite the (Macedonians)," he said.

Macedonian opponents called the deal a "defeat" of diplomacy

Opposition is even stronger in Greece's north, where Greek and Bulgarian guerrillas fought a bitter four-year war in the early 20th century for predominance among Orthodox Christians in then Ottoman-held Macedonia.

Two short wars were then fought in 1912 and 1913 between the Balkan states and the Ottoman Empire to end six centuries of rule from Istanbul, with atrocities committed by both sides.

In a paradox, Tsipras' nationalist coalition partners, the Independent Greeks party, are expected to support the government on Saturday but reject the Macedonia deal whenever it goes to a vote.

The agreement still needs to be approved by Macedonia's parliament and pass a referendum there as well as being ratified by the Greek parliament, a process likely to take months.