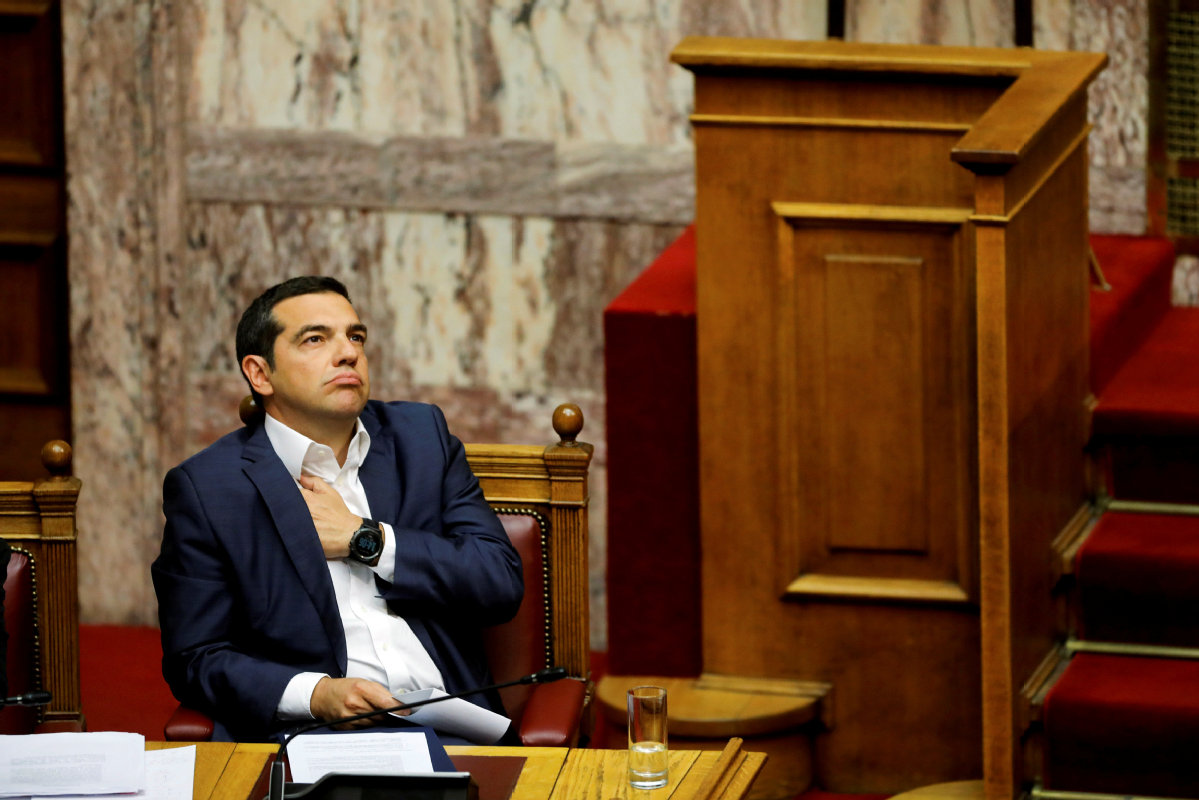 Greek Prime Minister Alexis Tsipras attends a parliamentary session ahead of a debate on a motion of no confidence by the main opposition in row over a deal on neighboring Macedonia's name, in Athens, Greece, on Friday.[Photo by Alkis Konstantinidis/Reuters]

ATHENS－Greek lawmakers on Friday were debating a no-confidence motion in the government brought by the main opposition party over a deal with Macedonia settling a long-standing dispute over the country's name.

Outside parliament, opponents of the deal gathered for a protest rally, waving blue-and-white Greek flags. Critics of the agreement in both countries accuse their respective governments of granting too many concessions to the other side.

The prime ministers of Greece and its northern neighbor, Macedonia, agreed on Tuesday that the former Yugoslav republic should be renamed North Macedonia, ending a disagreement that had prevented the country from joining international institutions such as NATO and had poisoned bilateral relations since the early 1990s.

Greece had argued the name "Macedonia" implied territorial claims on its province of the same name, birthplace of the ancient warrior king Alexander the Great, and usurped its ancient Greek heritage and history.

The dispute lurched through repeated rounds of United Nations-mediated negotiations for years to no avail. A breakthrough was reached after a change of government in Macedonia, with Prime Minister Zoran Zaev taking over last year after a decade of rule by conservative Nikola Gruevski.

But the deal reached between Zaev and Greek Premier Alexis Tsipras led to fury from critics in both countries.

Kyriakos Mitsotakis, the head of Greece's conservative New Democracy party, on Thursday submitted a motion for a no-confidence vote in the government, saying he had "an obligation before the Greek people to try to avert the mortgaging of our country's future with an agreement that is detrimental to our national interests".

Debate on the motion began on Thursday evening and is to conclude with a vote on Saturday.

Tsipras has a four-seat majority in the 300-member parliament, but the name deal has led to a rift within the government itself.

Defense Minister Panos Kammenos, who heads the coalition's junior partner, the right-wing Independent Greeks party, said before the deal was announced that he would oppose the agreement in a parliamentary vote. That would leave Tsipras dependent on support from political opponents to ratify it in parliament.

But it is unclear whether his objections to the Macedonia name deal would lead him to bring down the government by voting against Tsipras in Saturday's no-confidence vote.

Tsipras has said he does not expect that to happen.

Zaev has also met with a political backlash at home. His country's president, Gjorge Ivanov, has said he will refuse to sign off on the deal if it is ratified by parliament, a move that would delay implementation of the deal. The agreement would be sent back to parliament for a second vote, but if it passed again, Ivanov would be obliged to sign off on it.