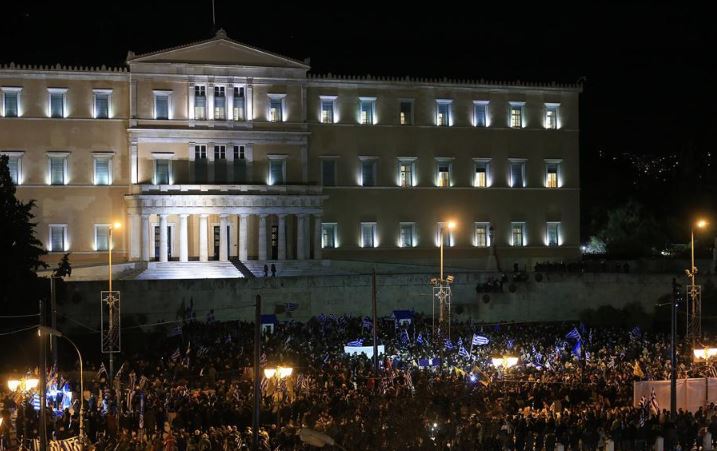 People demonstrate against the Macedonia name deal in front of the Greek Parliament at Syntagma Square, in Athens, Greece, on Jan. 24, 2019. (Photo: Xinhua)

ATHENS, Jan. 24 (Xinhua) -- Greek Prime Minister Alexis Tsipras defended the Macedonia name agreement while addressing the parliament on Thursday, as the crucial vote in the plenary was postponed to Friday.

"Greece receives back what belongs to her, history, the symbols and legacy of ancient Greek Macedonia. North Macedonia becomes a friendly country, an ally moving ahead with Greece to cooperation, peace and security in the region," Tsipras said during a debate which was broadcast live on Greek national broadcaster ERT.

Meanwhile, thousands of opponents of the deal had gathered outside the parliament building, waiving Greek national flags and chanting slogans against the ratification of the agreement.

Three separate protests were held on Thursday by the Greek Communist party, a Leftist party and citizens groups. They ended this time with sporadic scuffles between groups of demonstrators and anti-riot police.

Although the size of the rallies was far smaller than the mass demonstration staged on Syntagma square on Sunday which according to police estimates attracted more than 60,000 people, protesters were equally adamant on their opposition to the deal clinched last summer between the governments of Athens and Skopje.

"Our grandfathers fought to save Macedonia. We will not betray her, we will not allow a sell out," Katerina, a protester, told Xinhua on Thursday, shortly before the PM's speech.

"Why didn't they ask us? They did not ask us our opinion. They acted on their own. It is not our fault. We will fight to the end," Maria, another protester added, requesting a referendum on the issue.

According to all recent opinion polls 65-80 percent of Greeks have not been convinced that the agreement will end the 28-year row between Greece and the Former Yugoslav Republic of Macedonia (FYROM) without jeopardizing Greece's national interests.

Since 1991, when FYROM declared independence from Yugoslavia picking the name Macedonia, the same name as a province in northern Greece, Greeks protested, fearing territorial claims by the new Balkan state.

Under the agreement which was reached after marathon UN-mediated talks, FYROM will be renamed "Republic of North Macedonia" and the doors to EU and NATO accession will open.

Despite the recent constitutional amendments made by Skopje's parliament, Greek critics of the deal still express concern that the neighboring country retains irredentist ambitions.

"You recognized Macedonian identity and language. The risk of irredentism is based on these two pillars, identity and language," Greece's main opposition New Democracy party leader Kyriakos Mitsotakis argued on Thursday during his speech, criticizing the government of allowing Skopje to monopolize the term Macedonian.

With the Greek parliament divided on the issue and many MPs asking to take the podium to voice their opinions, the roll call vote which was scheduled for Thursday evening will take place Friday, it was announced.

Tsipras' ruling Radical Left SYRIZA party now holds only 145 seats in the 300-member strong plenary, after the departure of the junior partner in the government coalition earlier in January due to opposition to the ratification of the deal.

The Greek leader counts on the votes of opposition parties' lawmakers, and in particular independents, to pass the agreement.