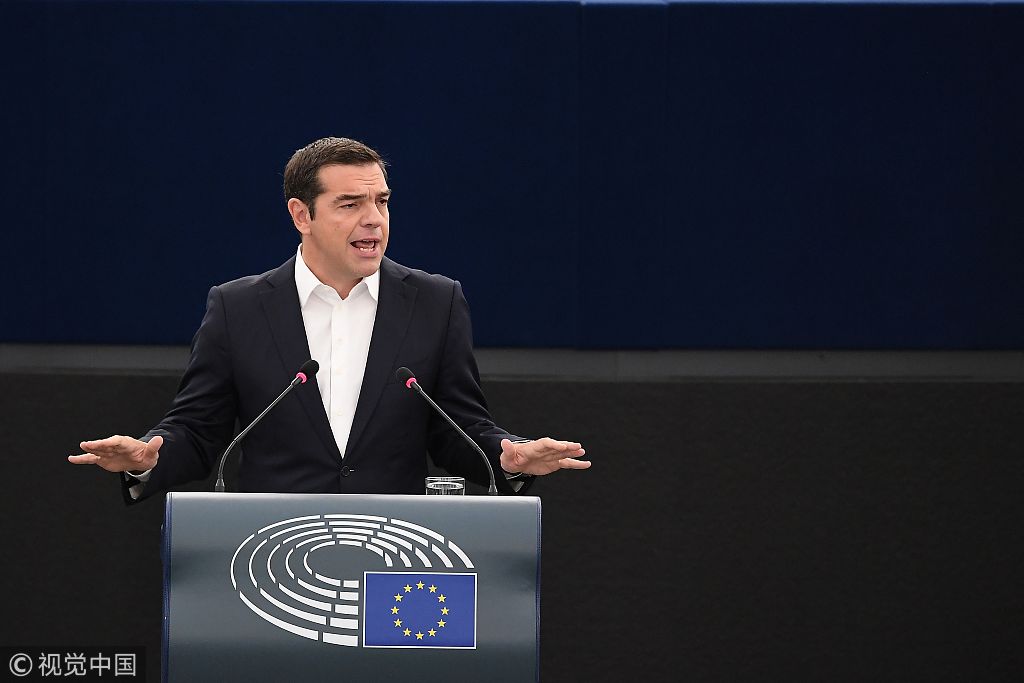 Greek Prime Minister Alexis Tsipras speaks during a debate on the future of Europe during a plenary session at the European Parliament on September 11, 2018 in Strasbourg, eastern France. (Photo: VCG)

Greek Prime Minister Alexis Tsipras warned Europe against the threat of populism ahead of 2019 European elections on Tuesday in a address to European Parliament here, calling for a stronger European Union (EU).

Speaking to European Parliament members in their first plenary session since the summer break, Tsipras said next year's poll "will be more than just one more election, it will be a combat on the basis of principles and values," and he called on EU supporters to face the threat of "extreme neo-liberalism and far-right populism".

"In this fight, all progressive, democratic and pro-European forces have a duty to stand side by side on the same side of history," the Greek prime minister said. "We should not let Europe slide back into the past."

In a speech organized as part of an ongoing series of visits from European heads of state and government to debate the future of Europe with the Parliament, Tsipras called for Europe to return to its "founding values" and be remade with a "stronger social contract".

"The failure of the EU to give democratic and structural answers to present challenges would unavoidably lead to triumph of chauvinism," he said, noting several current problems facing Europe, including poverty, increasing inequality, and the migrant crisis.

The long Greek recovery after the global economic crisis was a central point that Tsipras cited as an example. Greece celebrated the recent "clean exit" from its final, 3-year bailout program in August 2018, and during his speech Tsipras praised the resilience of the Greek population.

"Greece is a case study for Europe," Tsipras said, arguing that his government had made necessary structural reforms to the Greek economy, while still providing protection to "the most vulnerable".

Tsipras said that since exiting the bailout program, Greek would stick to the approaches that had led to recovery. "We are determined to avoid the mistakes and the behavior of the past that led to the crisis," he said. "We will continue our path of fiscal stability."

An optimistic look at the Greek recovery was shared by the European Commission, with Economics Commissioner Pierre Moscovici saying in August that extensive reforms to the economy in Greece had "laid the ground for a sustainable recovery."