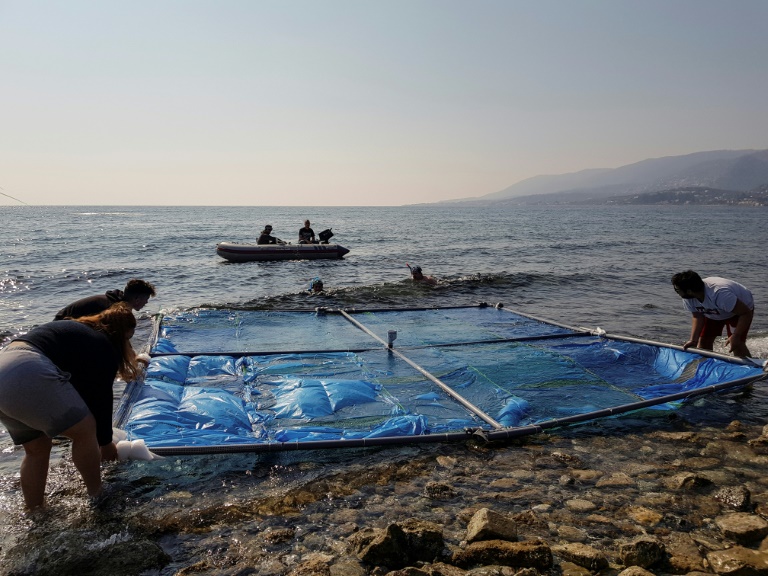 Millions of tonnes of plastic end up in the oceans every, affecting marine wildlife all along the food chain. (Photo: AFP)

Knee-deep in water on a picture-postcard Lesbos island beach, a team of Greek university students gently deposits a wall-sized PVC frame on the surface before divers moor it at sea.

Holding in plastic bags and bottles, four of the 5 metre-by-5-metre (16 foot-by-16-foot) frames are part of an experiment to determine if seaborne litter can be detected with EU satellites and drones.

"This was the first big day," says project supervisor Konstantinos Topuzelis, an assistant professor at the University of the Aegean department of Marine Sciences, said of the scene from last week.

"All the targets were carried into the sea, the satellites passed by and we're ready to fill out the first report."

The results of the experiment -- "Satellite Testing and Drone Mapping for Marine Plastics on the Aegean Sea" -- by the university's Marine Remote Sensing Group will be presented at a European Space Agency symposium in Milan in May.

"Marine litter is a global problem that affects all the oceans of the world," Topouzelis told AFP.

Millions of tonnes of plastic end up in the oceans, affecting marine wildlife all along the food chain.

"Modern techniques are necessary to detect and quantify marine plastics in seawater," Topouzelis added, noting that space agencies have already been looking into how drones and satellites can help with the clean-up.

"The main advantage is that we are using existing tools," which brings down costs and makes it easier to scale up, says Dimitris Papageorgiou, one of the 60 undergraduate and postgraduate students who worked on the experiment.

To prepare, the team gathered some 2,000 plastic bottles and lashed them to the frames. Other targets were crafted with plastic bags, as these are even harder to spot in the water and usually constitute the deadliest threat to Aegean marine life such as dolphins, turtles and seals.

In 2018, a first phase in the experiment was able to detect large targets of around 100 square metres from space.

This year's experiment uses targets a quarter that size to test the smallest detectable area under various weather conditions.

"It was a crazy idea," laughs Topouzelis.

"We knew that the European satellite system passes at regular intervals with a spatial resolution of 10 metres."

In theory, then, the satellites should be able to detect the floating rafts of plastic the team pushed out to sea.

The University of the Aegean is working on the project with Universidad de Cadiz in Spain, CNR-Ismar in Italy and UK environmental consultants Argans Ltd.

Satellite data is provided free from the European Space Agency (ESA) and hours after the overpass targets should be detected from the Sentinel-2 satellite.

The project acts as a calibration and validation exercise on the detection capabilities of the satellites.

But even if relatively small patches of plastic garbage can be spotted from orbiting satellites, the problem of how to remove it from the sea remains.

Last year, a giant floating barrier five years in the making was launched off the coast of San Francisco, as part of a $20-million project to clean up a swirling island of rubbish between California and Hawaii.

But the slow speed of the solar-powered barrier prevents it from holding onto the plastic after it scoops it up.