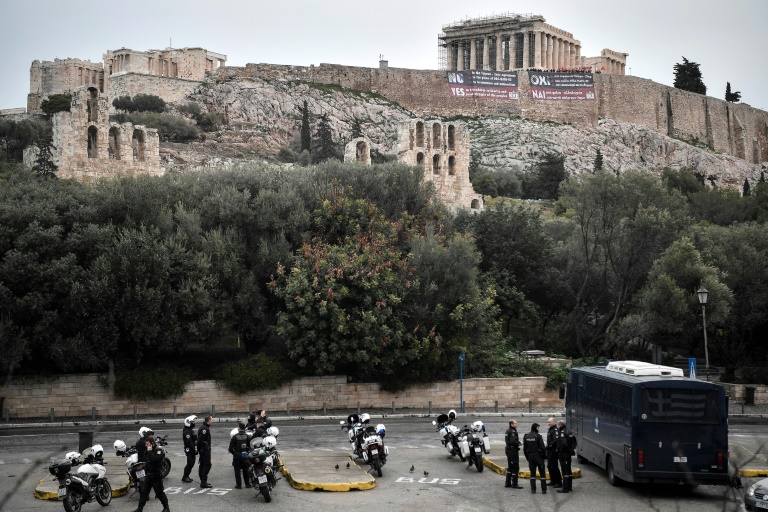 Ahead of the name change vote, Communist Party activists hung giant banners outside the Acropolis in Athens reading: "No to the Tsipras-Zaev agreement". (Photo: AFP)

Greece's parliament on Thursday postponed for several hours a historic vote on a deal to change the name of neighbouring Macedonia, as protesters rallied against the agreement.

Initially scheduled to be held after midnight, the vote will be held Friday from 1230 GMT onwards because of the large number of lawmakers who want to speak on the issue, state TV ERT said.

The move was announced as flag-carrying protesters began to gather outside parliament in Athens, monitored by riot police.

Macedonia's parliament 10 days ago backed a constitutional revision to change the country's name to the Republic of North Macedonia. But for the deal to go through, the change must also be approved by Greek MPs.

Earlier on Thursday, Communist party activists draped giant banners outside the Acropolis, reading: "No to the Tsipras-Zaev agreement".

That was a reference to the landmark compromise agreed in June between Macedonia's Prime Minister Zoran Zaev and his Greek counterpart Alexis Tsipras.

On Sunday, clashes between police and masked protesters left around 40 people injured as tens of thousands demonstrated in Athens against the name change.

According to the government, "the incidents were provoked by extremists, members of (neo-Nazi party) Golden Dawn, who attempted to enter parliament".

A wide range of Greek political parties, from the Golden Dawn to the Socialists, oppose the accord to rename Macedonia.

But it could nonetheless be approved by the required 151 lawmakers in the 300-seat parliament.

The accord aims to start unravelling one of the world's longest diplomatic disputes. The disagreement began nearly three decades ago with Macedonia's declaration of independence but its roots date back centuries.

Since 1991, Athens has objected to its neighbour being called Macedonia because Greece has a northern province of the same name. In ancient times it was the cradle of Alexander the Great's empire, a source of intense pride for Greeks.

But the June agreement marks a landmark shift in the dispute, with the efforts of the two prime ministers winning them a nomination for the 2019 Nobel Peace Prize.

In addition to normalising relations between the two countries, implementation of the agreement will open the door for Macedonia to join the European Union and NATO, hitherto blocked by Athens' veto.

But in Greece, the name of its neighbour continues to fuel controversy in politics and society, a few months ahead of parliamentary elections scheduled for October.

Last week, Tsipras's ruling coalition fell apart as a result of the controversy but he then narrowly won a confidence vote, setting the stage for the name-change vote in parliament.

His leftist Syriza party has 145 MPs and enough independent members have pledged their support to secure approval of the deal.

Speaking to AFP on Thursday, Macedonia's Foreign Minister Nikola Dimitrov said supporters of the deal were "on the right side of history".

He said the agreement offered a valuable model for resolving a number of complex disagreements in the Balkans.

Dimitrov, who was one of the top architects of the June deal along with Nikos Kotzias, his Greek counterpart at the time, said the compromise had created "a climate (in which) the impossible is actually possible".

On the right, New Democracy leader Kyriakos Mitsotakis called on his MPs to denounce the agreement, accusing the government of surrendering "Macedonian identity and language" to its neighbour.

For many Greeks, especially in the north where the province of Macedonia is the birthplace of Alexander, the name "Macedonia" belongs to Greek historical heritage.

Some even fear their neighbour has territorial designs on its namesake Greek province.

"These concerns are exaggerated," Yannis Armakolas, professor of political science at the University of Thessaloniki, told AFP.

He deplored what he called a lack of party consensus and "real public debate" on an issue of national importance.

"If the agreement does not come into effect, the consequences of the failure will be profound and both sides might well reconsider many elements that had been agreed to," UN mediator Matthew Nimetz said in an interview with Greek news agency ANA.

Opposition leader Mitsotakis has been calling for early elections. He promised "a new negotiation" with Skopje if the agreement is not endorsed by parliament and if he secures victory in the upcoming elections.

But Nimetz said reaching a new agreement "would take years, not months, given that all the issues would once again be on the table, and given that there are likely to be different political dynamics in both countries, as well as changes in the regional and global environment."