Greek Prime Minister Kyriakos Mitsotakis said on Thursday that the country came across the biggest ecological disaster of the last few decades, as multiple blazes erupted across the country powered by the extended heatwave recently. 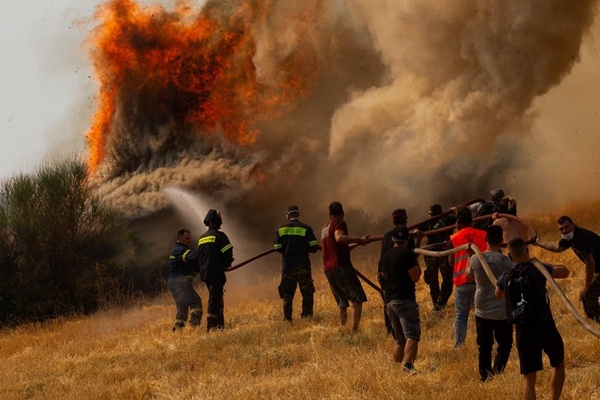 Firefighters and volunteers try to put out a fire in Afidnes, some 30 kilometers away from the Greek capital of Athens, on Aug. 6, 2021. [Photo/Xinhua]

"We managed to save thousands of people, but we lost forest land and properties," Mitsotakis said during a press conference in the aftermath of the devastating wildfires that broke out in Greece within the last few days.

Nearly 100,000 hectares of forestry and farmland have burned in less than two weeks in Greece, according to the European Forest Fire Information System (EFFIS).

Among them, the catastrophic wildfires which started on Aug. 3 on the island of Evia have burnt approximately 46,582 hectares, the National Observatory of Athens said on Thursday.

"The climate crisis is here, and everything needs to change, from the orientation of the economy and the national energy policy to the State's operation and the behavior of each citizen in relation to the environment," he said.

For Mitsotakis, the climate crisis requires a drastically different approach. "The new conditions justify my choice to make the environment a national priority," said Mitsotakis, adding that a new climate law will be passed in the coming months.

Asked about the cause of the fires, and whether there was an organized arson plan, Mitsotakis said it was "certain that all the fires did not break out by accident."

Several people have been arrested over the past few days on suspicion of attempting to start fires, including some who are accused of doing so deliberately.

However, Mitsotakis said it was unclear whether this was a result of an organized plan, and noted that the hot, dry conditions aided the spread of wildfires.

He also indicated that the government would complete its four-year term, ruling out the possibility of early elections.

"The fact that we have managed many crises is a reality, but it cannot be an excuse for the government not to move forward. In these two years we have promoted important reforms in dealing with crises I believe effectively. Early recourse to the polls would be a sign of weakness and not a sign of strength and confidence," Mitsotakis said.

For the past ten days, Greece has been experiencing a wave of violent fires across the country. According to the Greek government, there have been nearly 600 fires since the beginning of August.

The fires broke out as Greece is roasted by the most intense and protracted heat wave in around 30 years, with temperature in many parts of the country reaching 42-45 Celsius degrees.

Greece is hit by wildfires nearly every summer. In 2018, 102 people died in a massive fire in the coastal resort of Mati near Athens.