Green parties' surprisingly strong showing in elections for the 751-seat European Parliament raised hopes — particularly among young voters — that global warming and other environmental issues will get more serious consideration on the continent. 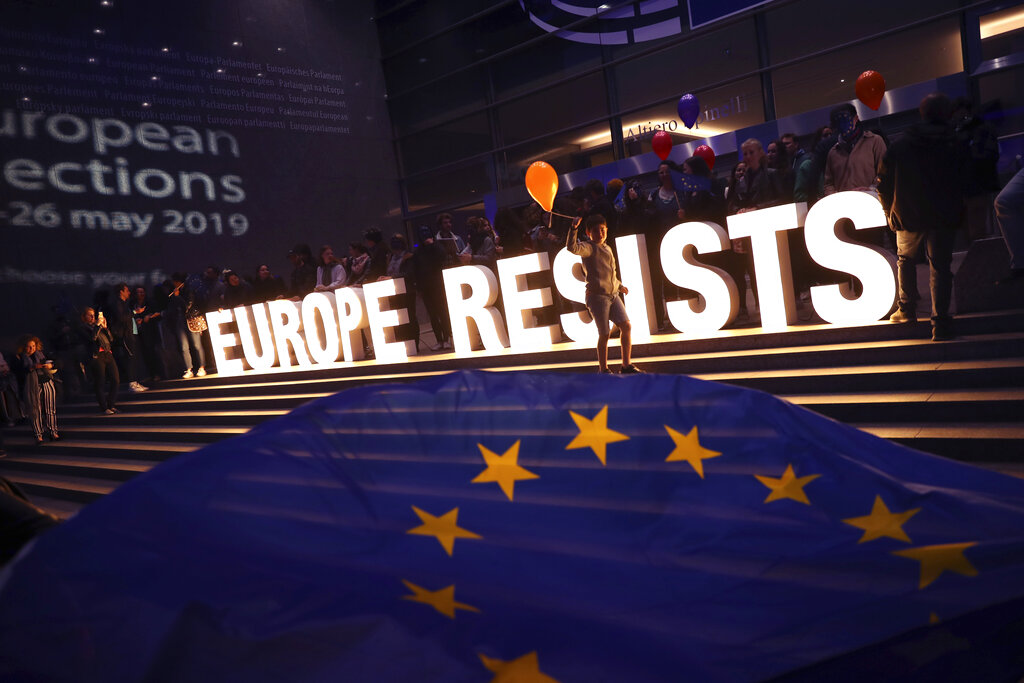 A young boy with a balloon walks by a sign erected by climate activists outside the European Parliament in Brussels, Sunday, May 26, 2019. (Photo: AP)

Provisional results Monday showed the left-leaning Greens coming in fourth in the balloting with 69 seats, an increase of 17 from the last election, five years ago. Perhaps more significantly, the results showed how environmental concerns can transcend the political issues that dominate most European Union elections.

"The European election was a climate election," declared Anna Kretzschmar, a German in her 20s who was out in a Berlin park with her young child.

Kretzschmar welcomed the lift the Greens received in Sunday's vote, saying it would give them a stronger voice to raise the alarm about global warming.

"I think we are more affected by climate change than we realize," she added.

Among other things, the Green movement has strongly backed scientists' calls for the 28-nation bloc to end all greenhouse gas emissions by mid-century, a goal that would require an epic shift in Europe's economy away from fossil fuels.

In Germany, the Greens did particularly well in large cities and among young voters, according to the Infratest dimap research institute. The gains followed months of street protests from students demanding action to stop global warming.

The German Greens' gains came at the expense of all other mainstream parties, including the center-left Social Democrats, who slumped to third place behind the Greens, and Chancellor Angela Merkel's center-right Christian Democrats.

Armin Laschet, the governor of North Rhine-Westphalia state and a member of Merkel's party, called the outcome "a wake-up call for politics."

In France, the environmental EELV party received almost 13.5% of the vote, coming in third. Green parties also polled strongly in Austria, Belgium, Ireland, Denmark and the Netherlands. In Britain, the Greens — a largely insignificant force nationally — took 7 seats in the European Parliament vote.

"The center of gravity of European politics is shifting," said Yannick Jadot, the EELV's lead candidate.

Manuel Rivera, a Green party member in the German capital, said the European Parliament is the right place to tackle climate change: "I think people realize that there are issues you can't solve at the national level."

The suggestion that countries should set aside domestic interests in favor of European cooperation angered some nationalist parties on the continent.

Alexander Gauland, co-leader of the far-right Alternative for Germany, declared the Greens "our main enemy."

"The Greens will destroy this country, and our job must and will be to fight the Greens," said Gauland, whose party has claimed that climate change isn't a man-made phenomenon and that efforts to tackle it will harm Germany's economy.

In addition to pushing for action on climate change, the Greens have generally positioned themselves as a counterweight to anti-immigration parties such as Alternative for Germany, which have decried the influx of migrants from the Middle East.

The Green bloc in the European Parliament could now be in a position to play a key role in choosing the next head of the EU's executive Commission.

Sven Giegold, a leading candidate for the German Green party, which roughly doubled its share of the vote to 20% compared with 2014, wouldn't rule out backing one of the mainstream candidates provided environmental issues are reflected in his or her program.

Giegold's party has proposed diverting some of the bloc's huge agricultural subsidies toward eco-friendly farming and checking the climate impact of every law passed at the EU level.

"Whoever wants legitimacy from us and the legitimacy of the many who went onto the streets will need to deliver now," he said.