Greenpeace has apologized and Munich police are investigating after a protester parachuted into the stadium and injured two people before Germany’s game against France at the European Championship. 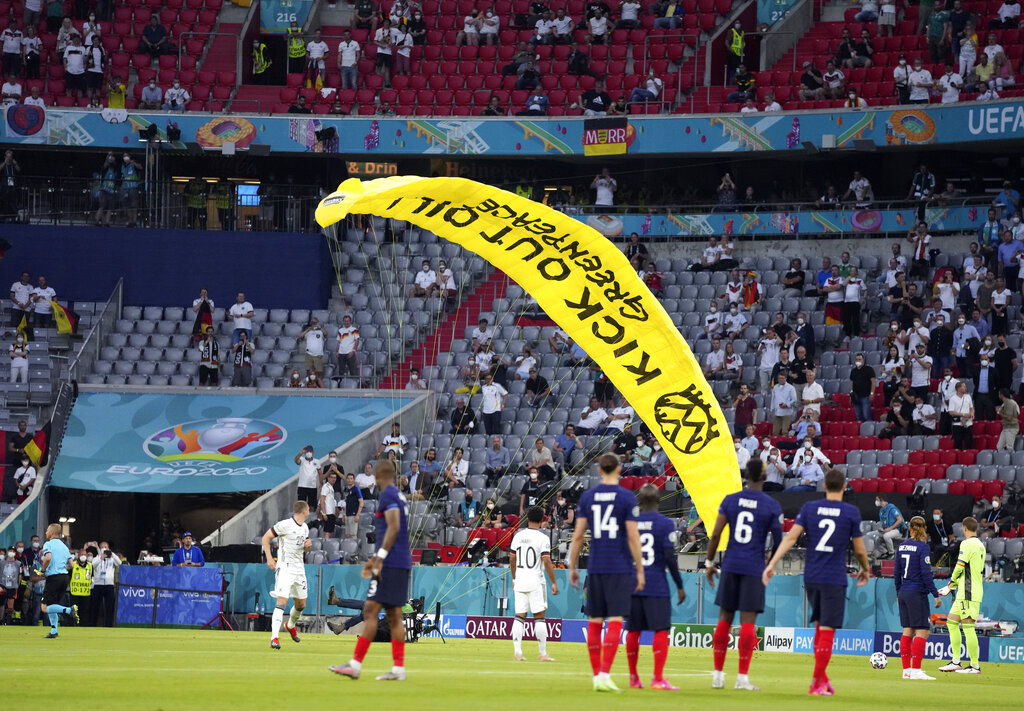 A Greenpeace paraglider lands on the pitch before the Euro 2020 soccer championship group F match between France and Germany at the Allianz Arena in Munich, Germany, Tuesday, June 15, 2021. (Photo: AP)

The protester used a powered paraglider with a motor attached to his back but lost control and hit overhead camera wires attached to the stadium roof, careening over spectators’ heads before he landed on the field ahead of Tuesday’s game. Debris fell on the field and main grandstand, narrowly missing France coach Didier Deschamps.

“The paraglider didn’t want to go into the stadium yesterday. The pilot wanted to fly over the stadium while maintaining the necessary safety distance and only let a balloon float into the stadium with a message to Volkswagen, a main sponsor, with the demand that they get out of the production of climate-damaging diesel and gasoline engines quicker,” Stephan said. 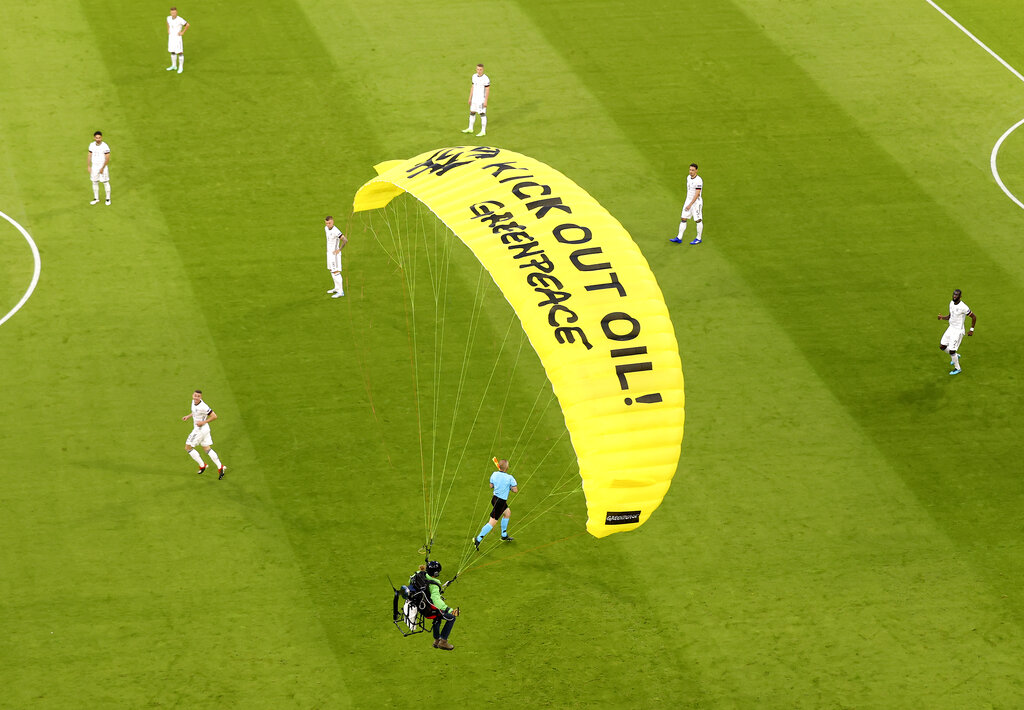 The German players look on as a Greenpeace paraglider lands in the stadium prior to the Euro 2020 soccer championship group F match between France and Germany at the Allianz Arena stadium in Munich, Tuesday, June 15, 2021. (Photo: AP)

“And there was a technical problem during the flight over — the hand throttle of the electric para motor failed, and because there was no more thrust, the glider suddenly lost height.”

Stephan said the pilot had no option but to make an emergency landing on the field after striking the steel cables attached to the stadium’s roof.

“We are in the process of clarifying this and are working with everyone and of course we take responsibility and would like to emphasize again that we’re very sorry, and that we apologize to the two people who were harmed,” Stephan said.

Munich police said they were investigating various potential violations of the criminal code and aviation act.

“The pilot injured two men during the landing approach. The injured were given medical care by the emergency services and taken to hospitals for further care,” Munich police said in a statement.

The police said none of the injuries were serious and the pilot himself — a 38-year-old man with an address in the southwestern state of Baden Württemberg — was unharmed.

“There is no understanding whatsoever for such irresponsible actions in which a considerable risk to human life is accepted,” the police said. 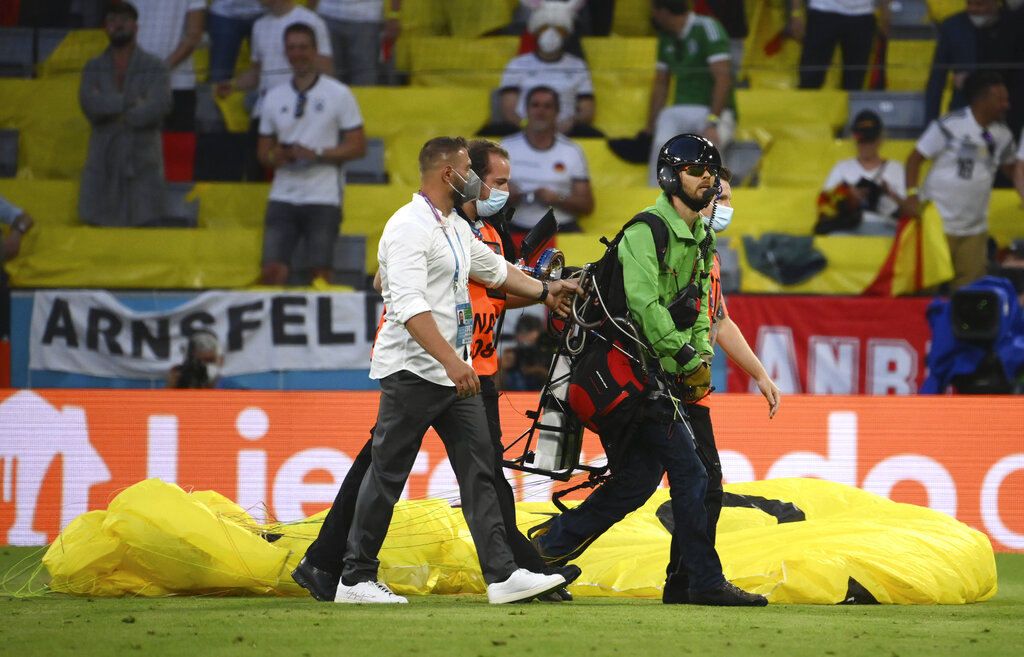 Paraglider walks on the pitch prior the start of the Euro 2020 soccer championship group F match between Germany and France at the Allianz Arena stadium in Munich, Tuesday, June 15, 2021. (Photo: AP)

The protester’s parachute had the slogan “KICK OUT OIL!” and “Greenpeace” written on it.

The parachutist managed to land on the field and Germany players Antonio Rüdiger and Robin Gosens were the first to approach him. He was then led away by security stewards.

UEFA called the action “reckless and dangerous” and said “law authorities will take the necessary action.”

“It could probably have turned out much worse,” Germany team spokesman Jens Grittner said.

UEFA and one of its top-tier tournament sponsors, Russian state energy firm Gazprom, have previously been targeted by Greenpeace protests.

In 2013, a Champions League game in Basel was disrupted when Greenpeace activists abseiled from the roof of the stadium to unfurl a banner protesting Russian oil and Gazprom, which sponsored the visiting team, German club Schalke.

Greenpeace later donated money to a charity supported by Basel, which was fined by UEFA for the security lapse.

UEFA defended its environmental credentials in a statement on Tuesday after the incident.

“UEFA and its partners are fully committed to a sustainable Euro 2020 tournament,” UEFA said, “and many initiatives have been implemented to offset carbon emissions.”