Greenpeace chief locked out of UN climate meet amid protests 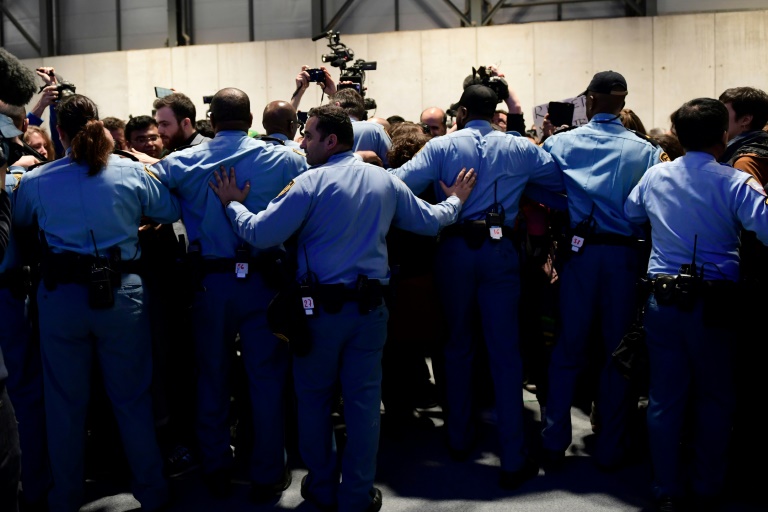 More than 200 youth and indigenous rights activists were thrown out of the climate talks in Madrid。（Photo: AFP）

Hours after sharing a podium at 196-nations climate talks with Swedish activist Greta Thunberg, the head of Greenpeace International found herself locked out of the building Wednesday along with hundreds of other observers ejected from the talks.

Jennifer Morgan, who has been attending the troubled UN negotiations for 25 years, said the expulsion was without precedent.

"This afternoon there was a peaceful protest outside of the plenary," Morgan told AFP.

"The protesters were abruptly and roughly moved out of the building. When I tried to get back in I found that the security had closed access to all observers."

Credentialed observers -- including research institutes, NGOs and other civil society groups -- play a critical role in the talks, which are tasked with saving the world from runaway global warming.

"We are the ones who can apply pressure and hold governments accountable," Morgan said. "When we are not in the building, we are not able to do that."

"I call on the Secretary General to intervene here to make sure that youth and citizens around the world can engage and have their voices heard in these negotiations," she added.

United Nations officials, when asked about the lock-out, had no comment.

More than 200 youth and indigenous rights activists were thrown out of talks, set to end Friday, after staging a protest demanding that nations take urgent action to avert catastrophic climate change.

The protesters chanted "Climate Justice Now!" and "Shame! Shame! Shame!" for several minutes before security intervened and pushed the activists into a car park, where they were briefly held.

"This is the critical phase of the negotiations -- the ministers are now involved," Morgan said.

"They cannot think that just because they are keeping us out of the building that we will not hold them accountable for what happens inside."

Negotiators in Madrid are hashing out the rulebook for the landmark Paris accord, which aims to keep global temperature rises "well below" two degrees Celsius (3.6 Fahrenheit).

But national carbon cutting pledges submitted in annex to the 2015 treaty are inadequate, and would collectively see temperatures rise at least 3C above preindustrial levels, a recipe for widespread human suffering, scientists say.