WORLD Grenfell: One year on

Grenfell: One year on

Anger and impatience for justice mix with raw grief as Britain prepares to mark the first anniversary of the Grenfell Tower disaster - the deadliest domestic fire since World War II. 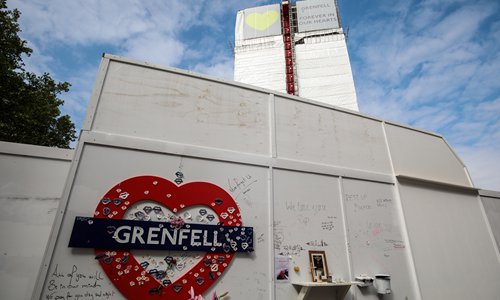 A green, heart-shaped banner of support is hung from the top of Grenfell Tower while a London Underground-themed memorial is displayed below to honor the victims, on June 8 in London, England. Thursday, June 14, 2018 marks the first anniversary of the Grenfell Tower fire disaster that killed 71 people and left many others homeless. Photo: VCG

In a west London community still traumatized by the apartment block blaze that killed 72 people, many voiced frustration with politicians and the fire brigade ahead of Thursday's commemorations.
"I don't understand why as a country we're not in uproar, why we're not absolutely telling the government that things need to change now," said Tasha Brade, a local resident and campaigner with Justice4Grenfell, a support group for survivors.
Campaigners want some arrests to come out of an ongoing investigation, as well as a ban on the cladding that helped spread the blaze.
They have criticized the fire brigade's "stay put" policy for tower residents, which was only lifted after two hours.
The slow effort to rehouse people has added to the anger, with 43 of the 203 households displaced still living in hotels.
"People who were affected did not receive the services they needed with respect to their health and well-being," said Vassiliki Stavrou-Lorraine, who has lived opposite the tower for 34 years.
"Unfortunately, one year on we are still having this situation," she added, saying "people are suffering from depression and post-traumatic stress disorder."
'They were left to die'
Relatives of those who died have recently provided heart-rending testimony about the final moments of their loved ones at the beginning of a public inquiry into the fire, reminding Brits of the shocking scale of the tragedy.
The fire, which broke out in the kitchen of a fourth-floor flat in the 24-story tower in the early hours of June 14 last year, spread swiftly up the building.
Seventy-one people lost their lives, and a woman in the building later suffered a stillbirth blamed on the inferno.
The concrete block built in 1974 underwent renovation between 2014 and 2016, when it was wrapped in a new cladding.
The material had not been tested in fire conditions and did not comply with building safety guidance, according to an expert's report commissioned by the inquiry.
But the London Fire Brigade told residents to "stay put" - standard procedure in high-rise fires - for nearly two hours, despite the fire reaching the roof within around half an hour.
The policy has been severely criticized by relatives of those who died.
"The fact is, our relatives are being remembered now because they were left to die," Karim Mussilhy, whose deceased uncle lived on the top floor of Grenfell Tower, wrote last month in the Guardian.
"I was glad that I didn't follow that advice and I just hate to think what would've happened if I'd stayed put," Kerry O'Hara, a survivor from the sixth floor, told AFP.
PM's apology
The local council in Kensington and Chelsea, where Grenfell Tower is located, has been in the spotlight for its role in both the run-up to and aftermath of the fire.
Residents argue the wealthy borough neglected the less affluent northern section that is home to Grenfell and surrounding public housing.
They also accuse it of cost-cutting on the refurbishment and bungling its overall response.
A council spokesman said it had committed 235 million pounds ($315 million) to secure new homes for people to choose from.
Prime Minister Theresa May has also faced criticism, including over her government's hesitation to ban the cladding involved, after a report said that alone would not stop a repeat of the tragedy.
She apologized on Monday in a newspaper article for only meeting members of the emergency services and not residents when visiting the still-smoldering tower last June.
'Really unified us all'
In the face of perceived inaction, the community has banded together, with several organizations taking root.
Samia Badani, who lives opposite Grenfell, helped form a new residents group now operating a drop-in center offering everything from health and housing advice to food and drink.
"You simply couldn't go home and pretend it never happened," she said.
"We witnessed terror, devastation, destruction and what followed that was a complete collapse of the support system from the local authorities," she said.
Among the many memorial events happening across west London this week, the group will close a local street and hold a remembrance Wednesday night.
They plan to mark the moment the fire broke out by laying 72 white roses nearby and holding a 72-second period of silence, to honor the 71 victims that lost their lives that night and a woman rescued from the 19th floor who died in February seven months on from the blaze.
"It's a really bittersweet thing," said Brade of Justice4Grenfell.
"Of course this was the most devastating thing to happen to our community but it's really unified us all and it's made us realize that we do have a voice."